Samsung is back at it again, urging a healthy fitness regimen for anyone through the Gear Sport, one of its latest smartwatches.

If you’ve lost track of how many smartwatches Samsung has come out with, you wouldn’t be alone. The company has been keen on getting it right, following up on previous models with newer ones that try to fill gaps left over.

Samsung was distinct in naming this one the Gear Sport because it clearly implies its primary purpose.

After literally going big with the Gear S3 last year, the Gear Sport has gone through a diet and shed some of that girth. That model was pretty much a non-starter for women, given its size, whereas this one might be a little easier to accept. It’s not especially diminutive though—it still has some heft to it.

Samsung stuck to its basic design principles. It’s slightly larger than a standard 42mm watch, officially at 42.9mm. Samsung went with a rubberized strap that still maintains some thickness, but is more textured to better stay in place. You can use the spring-loaded lugs to attach any 20mm strap, in case you want to go with something different.

The watch has the same two physical buttons on the side: the top is the back button, the bottom the home button. Press the home button from the home screen and it brings up the app launcher. By default, double-clicking it does nothing, but you can change that in the settings and choose from a variety of options. Use it as a shortcut to launch the music player, S Voice, a news briefing, Samsung Health, among others.

Naturally, the 1.2-inch AMOLED display is touch-sensitive too. Between tapping and swiping on that, plus using the buttons or rotating bezel, Samsung has thrown in different input methods together.

The heart rate monitor underneath isn’t really different than previous versions. Water-resistance, however, takes a real dive—in a good way. The 5ATM designation means the Gear Sport can submerge down to 50 metres, even in saltwater.

While there is NFC included, Samsung Pay won’t work in Canada through the Gear Sport. Keep that in mind if mobile payments matter to you. As per usual, the Samsung Gear app for Android is the go-to for setting up and managing the Gear Sport. You can do a lot through settings on the watch itself, but the app can dig deeper. For iPhone users, the iOS Gear app will also function in the same way.

Like its predecessors, the watch runs on Tizen, Samsung’s own operating system. This is neither Android nor iOS, so it can feel like a compromise. Even so, it’s obviously more of an offshoot of Android, or at least that’s how it’s always felt to me. It does better with Android anyway, mainly because notifications will route through to the watch. iPhone users won’t get the same treatment.

Key to all this is the app integration. Samsung was hobbled by its limited offering, especially for useful third-party apps. The biggest addition for me was Spotify, which didn’t work last year. Being able to control playback without touching my phone was really convenient, but I’ll touch on that later. Much of what’s otherwise available focuses on the watch face, with countless options for changing how the watch’s display looks. Some other familiar ones will work to some degree, like Uber, NHL and Glympse, but the pickings are pretty slim. There are some neat apps for remote camera triggers that work with phones and GoPros, though they usually cost a small fee.

Samsung pushes its S Health app as the way to track activity, but you can opt for something more robust. Endomondo, Under Armour, MapMyRun and MyFitnessPal are all compatible. Strava and RunKeeper are not available.

As much as I liked how I could get around the interface, I was dealing with a (mostly) passive device. If I got a text message or email, I could read it and respond, but not compose one of my own. WhatsApp messages aren’t actionable. I could text a contact, but not send a WhatsApp message to the same person.

S Voice is also the only voice assistant available. I’d much rather have Google Assistant, but alas, there was no way to bridge the two together. Samsung wisely kept built-in GPS in the Gear Sport, helping to more accurately measure distance and pace. When starting a workout, the heart rate monitor also goes to work keeping tabs on beats per minute all the time.

The watch is supposed to recognize certain exercises on its own. So, if you’re walking, running, cycling, or on an elliptical or rowing machine, it will know. The dynamic workout mode is more generalized, tracking any form of sustained movement, especially if there’s an increased heart rate.

Other exercises will need some manual input. That includes swimming. With the excellent waterproofing in here, going for laps in a pool or at a beach won’t be a problem.

That’s all on top of counting steps, calories, stairs climbed, distance, and the other basic metrics typical for smartwatches and fitness bands. Simply swiping to the left from the watch face will cycle through them all, although some watch faces include those numbers too. I mentioned Spotify earlier, whose integration is amazing for Premium subscribers. I was able to download playlists onto the watch’s own storage for offline playback. After pairing with Bluetooth headphones, I basically cut out the phone from having to come along for any workouts. If you’re not on Premium, however, you won’t get offline playback. You would need to bring your phone in those circumstances.

Google Play Music is the default music player through the watch, except it’s not as seamless as it is on a watch running Android Wear. Moving music files that I normally listen to on Play Music over to the Gear Sport’s own storage wasn’t as easy as it should’ve been. I had the most success doing it through a computer, but would much rather have done it through the phone itself.

This is always a concern for any smartwatch, and the Gear Sport is no different. The catch to this device is that cutting off the biggest drains will keep it going longer. The screen will always stay off unless turned on, which helps. Turning GPS off makes a big difference. Without it, I was able to go almost four full days. With it on often, I was closer to 36 hours.

The good news is it charges back up fairly quickly. Within 90 minutes, I was back to full. That’s not bad, especially if you’re doing a workout at night and can charge it beforehand.

Despite the fact the Gear Sport works with the iPhone, I would advise you go with an Apple Watch instead. This watch was designed with Samsung Galaxy phones in mind first, and other Android devices second. That’s not to say you’re missing much using any Android phone, just that it’s not the same as using an Android Wear smartwatch.

Samsung’s smartwatches are like ongoing experiments. Each one tries to do different things better and more efficiently than the last. The Gear Sport is more specific. You want this watch because you want something to stay with you when active. If you have a Samsung Galaxy phone, consider this one first. If you’re an Android user, weigh it against other Android Wear watches.

The Samsung Gear Sport is available now in black or blue. 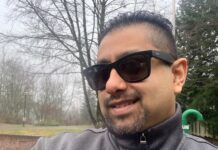