In the last few years, Activision has slowly been reviving some of the most famous video game characters from the 90s and early 2000s. Not long ago, Activision gave us the superb Crash Bandicoot N. Sane Trilogy remaster and last year Spyro made his return on the Xbox One and PlayStation 4. This year Spyro comes to the Nintendo Switch in Spyro Reignited Trilogy.

Much like Crash Bandicoot N. Sane Trilogy, Spyro Reignited Trilogy is a fully remastered collection of the three original Spyro games that started it all. I didn’t get a chance to play Spyro last year on Xbox One or PlayStation 4. So, I was excited to get my hands on the Nintendo Switch version to review and share my thoughts with you.

Spyro Reignited Trilogy neatly packages the first three PlayStation games in the series, which were originally released in 1998, 1998, and 2000. At the time, just as Crash Bandicoot was synonymous with the PlayStation brand, so was Spyro. Let’s take a quick look at each of the three games in the trilogy.

The sequel, Spyro 2: Ripto’s Rage!, takes place a few years after the first game. Spyro and his friend, Sparx the Dragonfly, decide to take a vacation for some rest and relaxation to Dragon Shores. However, Spyro ends up in the land of Avalar where an evil sorcerer by the name of Ripto is wreaking havoc on its people.

At the request of the Professor, Elora and Hunter, Spyro sets out to save the realm of Avalar and defeat Ripto to restore piece and regain control of Avalar’s homeworlds.

Spyro: Year of the Dragon

Do these classic Spyro games stand the test of time?

As much as I loved these games when then came out in the late 90s and early 2000s, the big question is how do they hold up today. Video game technology has increased by leaps and bounds since these games were released not only in graphical power but also through more intuitive controls or how games themselves are designed.

If you played these games when they first came out 21 years ago, not much has changed. The stereotypical platforming of the 90s remains intact. In each of the three games you have an over world in which you use to travel between different worlds. You collect games, Dragon Eggs, and rescue dragons—all while take out the bad guys. And, to do this, Spyro can dash, glide and breath fire.

Controls have been updated to reflect more modern standards that make playing these games easier. Once such new addition is the ability to use the right analog stick to control the camera. That being said, there are still some occasional camera issues where you can’t exactly see what’s going on for a short amount of tie. Additionally, I found that I had the most fun playing these games in short 30-60-minute gameplay sessions. Anything longer than that and the repetitive nature of doing virtually the same tasks from game to game made me loose interest.

Spyro has never looked and sounded so good

Insistent on not taking the easy way out, Toys for Bob rebuilt all three Spyro games from scratch—including soundtrack and voiceovers. Powered by the Unreal Engine 4, the environments for each game look fantastic on the Switch. While not as shiny or high resolution as the PlayStation and Xbox counterparts, each of the three games are impressive on the Switch.

Compared to the original games, the environments have truly come alive. It’s apparently that a great amount of work has been done to do so. All of the characters have been completely overhauled visually and look more modern.  Furthermore, the game’s original sound composer came back into the studio to create a new main theme for the game.

Additionally, soundtracks have been updated and remixed for a new, yet familiar sound. Actor Tom Kenny, Spyro’s voice, re-recorded all of his dialogue from both the second and third game. And, he even recorded new dialogue for the first game, which was not originally voiced by him.

Although Spyro Reignited Trilogy on the Nintendo Switch does have some quirks, its a great way to revisit or play for the first time some of the best games in the Spyro series. The visuals look fantastic, gameplay has been updated, and the game sounds great.

The difficulty in these games are perfect for younger kids and never get to a frustrating pace. I played in short 30-60-minute gameplay sessions and had a blast doing so. Being able to take all three Spyro games on the go on the Switch makes for a much better experience than being stuck in front of the TV.

If you are a fan of the first three Spyro games or looking for a game that is fun for all ages, I recommend picking up Spyro Reignited Trilogy on the Nintendo Switch. Let me know in the comments section below what your favourite Spyro game is and why.

– Some camera issues
– Gameplay can get repetitive at times
– Additional 8.7GB download is required to play all games 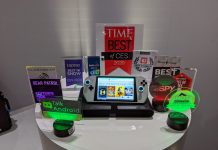