Streaming TV is where it’s at, because you can’t beat the convenience. Even in a study done five years ago in Variety, consumers say they are more inclined to stream entertainment from an internet service than tune in to live TV. Today, that same sentiment holds true.

So if you’re not yet in the streaming game, what are you waiting for? In this article, we’ll look at some of the basics of streaming TV with Apple TV.

Apple TV is the largest of the streaming devices. It’s about the size of a basic PB & J sandwich, but packed in the box is a very powerful TV platform. The box plugs into your existing TV (you’ll need a TV with an HDMI port) and using Wi-Fi, allows you to connect to the internet, and access TV shows, movies and even Netflix. There are currently two Apple devices available; the older but still just as functional 4th Generation Apple TV and the newer 4K Apple TV with voice-controlled Siri remote (Brad Moon’s article has a lot more about this new version of the Apple TV).

Can I connect with an Ethernet cable?

Apple TV will connect to the web with an ethernet cable; but most people use Wi-Fi.  However, if you don’t have Wi-Fi or want to keep your bandwidth usage down, and your ethernet cable is in the same room as the Apple TV, go ahead and connect directly.

How to hook up Apple TV

1.  Connect your Apple TV to your television using the HDMI cable, and power.
2.  Make sure to switch your TV to the correct HDMI port using the “Input” selector on the remote.
3.  Create an iTunes account and log in.
4.  Connect to Wi-Fi
5.  Pair the remote (you can also download and pair the remote app on your smartphone or tablet)
6.  Choose your content and play!

Once you have access to iTunes content, you can buy TV shows, or rent and purchase movies. The prices are clearly displayed, and you’ll get an emailed bill after purchases.

Watch my short two minute video on the basics of streaming with Apple TV; scroll down the page to view.

For some 3rd party services that can be accessed via Apple TV, like Netflix, you’ll need a separate account. Netflix is found on the Apple TV menu screen as an app or a channel. You click on it, and log in to your account; something you’ll only need to do the first time.

Netflix costs a set fee per month in Canada, but you get access to the entire Netflix library, whereas with the Apple TV content, you pay per show or per season.

How to AirPlay
Another great feature of Apple TV is AirPlay.  It allows you to stream content from your Apple tablet or phone right to the TV

1.  Make sure you’re logged in and connected to Wi-Fi
2.  Open a video on your iPhone or iPad.
3.  Look for the “AirPlay” button on screen
4.  Choose which device to Airplay on (likely “Apple TV” unless you have more than one Apple TV in the home, then you need to pick which one to play on).
5.  Press play on the video.

Pros and Cons of Apple TV

As an Apple user at home, one of the big benefits of Apple TV is that it works seamlessly with all my Apple devices.  I also really love the vast variety of TV shows, movies and other content I can get from the Apple TV device; when I search for a show, and it’s not on Netflix yet, it’s almost always found on Apple TV (for a price).

If there are cons to Apple TV, it’s probably its more expensive initial cost; it’s substantially more expensive than its competitors, the Roku Streaming Stick or Google Chromecast. It’s also much larger and difficult to hide than other devices.

As a tech writer, it may come as no surprise I own many streaming devices, but I use them each in different ways. Apple TV is my main go-to for home theatre streaming. I use a Roku Streaming Stick in my tiny kitchen TV, mainly to access Netflix while I’m making dinner. Why not Apple TV here? It’s the cost. I didn’t want to pay for a pricier Apple TV for something I would be paying half as much attention to, and watching half as often. I also have no need to AirPlay content to the kitchen TV, so investing in another Apple device here wasn’t necessary.
Similarly, Chromecast with Google TV is at work in my office where I don’t need to AirPlay and only occasionally need to watch TV while working.

So to break it down, Apple TV is your investment streaming device because it delivers a lot more content and functionality, particularly if you’re an iPhone or iPad user. Install it on your main TV and you won’t be disappointed. 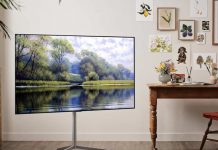 Does your home theatre need a receiver