If you find that cellular reception is a problem in your home or office, then the Eqo Boost from WeBoost may be the solution you’re looking for. Dropped calls, or parking yourself in one spot near a window to get a reliable connection for phone calls can be a frustrating experience, especially when you feel powerless to do anything about it.

Pronounced as “echo”, the Eqo Boost is designed to do just that with a signal from outside—capture it at its most optimal point near a window and amplify it up to 32 times. Even at a fraction of that theoretical number, it can mean the difference between one bar and four bars of signal. That’s a considerable upgrade in performance and call quality. 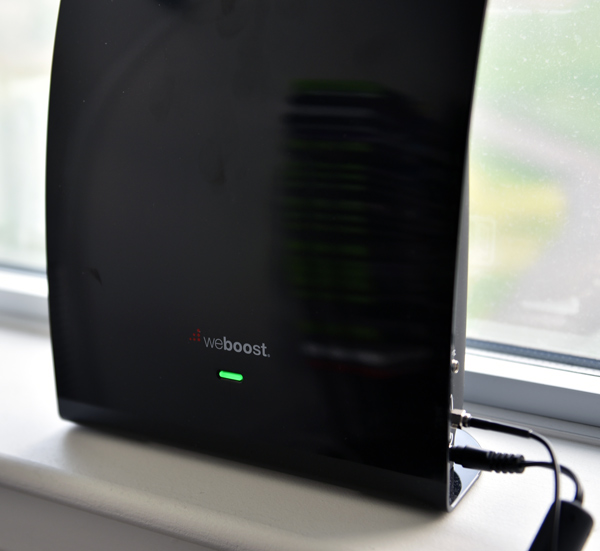 The Eqo comes in two main pieces. The Booster box is the part that pulls in the signal from outside, while the Antenna box is the part that amplifies it. Only one coaxial cable (25 ft. long) connects the two together, and the two need to be at least 6 ft. apart from each other. That could be having the Antenna sit in front of the Booster or to the side of it. The distance between them is important, but they also have to face the same direction, which is in toward the home or office.

Both boxes look very similar, with shiny veneers and few connections, so it can be easy to confuse them. Thankfully, WeBoost indicates which one is which in the box. The best way to remember it in case of realignment is that the Booster has the LED indicator on the front, whereas the Antenna doesn’t.

The connections on the side of the Booster are as basic as it gets. There is only the port for the power adapter, the coaxial input and another input for an optional external antenna that is not included. That’s it. Beyond that, there was nothing else to physically set up.

Ideally, the Booster should be set up on a windowsill or ledge, though it can be mounted on a wall with the built-in brackets. Placement largely depends on where the incoming signal from outside is strongest. Finding that out takes a little time and patience in measuring it. Being in a condo, I only had windows in my bedroom and living room, so was limited by where the signal was coming in. To give the Eqo Boost a full test, however, I tried both rooms to gauge performance.

On Android, measuring the signal was very easy. I only had to go to Settings>About Phone>Network to see the Signal Strength change decibel levels as I waded around my place. On my iPhone, I had to go to the Phone app and call this number— *3001#12345#* —to enter Field Test Mode. I then tapped Serving Cell Measurements to get a live reading. The signal strength is measured on a logarithmic scale, making the smaller number better, mainly between -50dB to -85dB as the sweet spot. Anything at -110dB or higher is either very weak or catches no signal at all. This is critical because the Eqo Boost can’t work in a dead zone—there has to be a signal strong enough to at least make a call for it to amplify.

Despite the appearance of a large presence because of how the units are spaced out, the Eqo Boost can’t cover a full house. It maxes out at 1,200 sq. ft., which will cover most condos, apartments and town houses, but not anything larger. If you live in a larger home, or operate a larger office, the unit will need to be strategically placed where it’s most needed.

That can be problematic if you suffer from a poor signal in a larger space, but even in smaller spaces, the unit’s amplification can diminish when using the phone in an adjacent room that is on either side of the Booster, rather than facing it. Not only that, but the long cable can make for interesting placement to get the most out of it. I didn’t have much room to attempt a lateral setup where the Booster would be off to the side over 6 ft. away from the Antenna, so I had to place it in front instead. I went as far as 12 ft. by running the cable along the wall where my home entertainment unit and speakers are, making the unit look less like a sore thumb.

I tested five phones with it, with three different carriers—Fido, Bell and Telus. I also got to try it with Wind, and found the results to be pretty consistent, which is saying a lot given how much the signal normally struggles indoors.

In every case, signal strength improved, though it wasn’t always dramatic. My place is notorious for poor signals, so it was the perfect location for trying out the Eqo Boost. I was pleased that I would get consistent signals in and around -95dB. Not quite in the wheelhouse for optimal performance, but compared to the 100-109dB I was getting before in the kitchen and my home office, the Eqo Boost delivered as promised.

It took time for it to kick in though. The green light on the Booster indicated that the unit was working fine, but it took over two hours before I noticed a boost on certain phones. My iPhone 6 Plus was finicky and didn’t respond as well, with wild fluctuations only a few feet apart. I’m not sure why this was happening, but I had an alternative that I’ll touch on in the next section.

One thing to note with a product like the Eqo Boost is that most carriers already offer Wi-Fi Calling for similar reasons, including dead zones. It’s limited to the iPhone 5c and later running on iOS 9, so non-Apple devices are still left out. By piggybacking off a home or office Wi-Fi connection, compatible phones (the phone must also have an LTE SIM card) can benefit from the faster connection to make calls and send/receive text messages without having to worry about weak cell reception.

The Eqo Boost is a niche product that serves a need most people can relate with. Some are lucky to have strong signals where they live, while others don’t. Urban dwellers are hit or miss, in that regard, though generally have it better than rural residents. If weak reception is a major issue that consistently gets on your nerves, and you have little recourse, this is a product that should solve that problem.