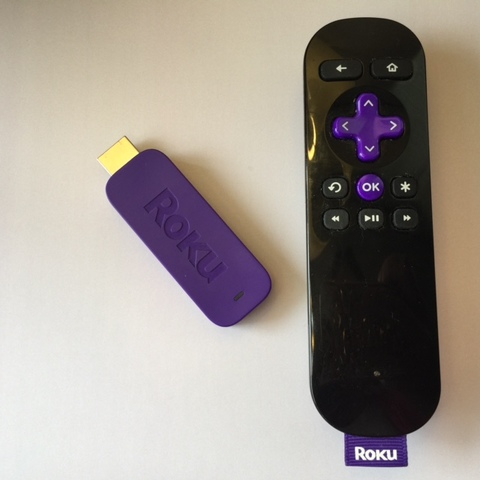 Streaming TV’s popularity is growing; increasingly viewers are turning to what’s called “Over the Top” content for their TV and movies.

Over the Top content is, simply, content you can get without being tied to a traditional cable or satellite provider, and some of the best examples of this are Netflix, as well as Amazon TV and Crackle. (There are even more options stateside. A recent Forbes article says there are actually 113 OTT providers in the US.) The way you get this type of OTT content as it’s also known, is via a smart TV or streaming device.

Roku makes a variety of streaming devices, but perhaps its best known model is the Roku Streaming Stick.This small thumb-sized device plugs in to the back of your TV, into the HDMI port and delivers content direct to the TV using Wi-Fi. The Roku Streaming Stick will give you access to streaming services like Netflix, YouTube, and a host of other online channels.

The Streaming Stick has actually just been redesigned and re-released, in a slightly smaller, but significantly faster package. While the new version doesn’t have 4K video resolution support just yet, it’s still an upgrade from the old model.

What can Roku do?
Both the original Streaming Stick (technically referred to as Model 3500) and the new version come with an included remote control that allows you easy point-and-navigate access to the content and menus. It will allow you to surf among the thousands of “channels” in the system; everything from the basics like YouTube, Netflix, Crackle and NFB, to Shalom TV, TMZ TV and the Cineplex Store. You can surf the channels, and add most-watched channels to your favourites list for quick recall.

A nice added feature; Roku can also act as a giant photo frame; mirroring photos from your smartphone or device, onto the TV screen. 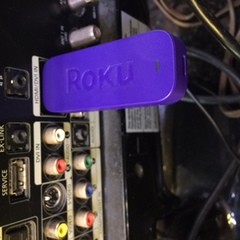 How to Stream with Roku Streaming Stick

Setting up your Streaming Stick requires that you have a Wi-Fi connection, and an HDTV. You just plug your Streaming Stick into the TV and Roku’s easy guided set up will walk you through installation, updating and installing channels. You should be up and streaming in no time flat.

1.  Put batteries in the remote. Connect the power to the Streaming Stick.
2.  Connect your Streaming Stick to your TV’s HDMI port (if you have more than one, take note of which port it’s going into. (If the Streaming Stick will not fit due to size or wall-mounting constraints, Roku does offer a free HDMI extender cable.)
3.  Wait for the Roku logo to appear. If nothing happens, use the “input” button to switch between them until you get the right input.
4.  Follow instructions for pairing the remote; this involves locating the tiny pairing button side the remote’s battery compartment. To see this, watch the how-to video on this page).
5.  Select your preferred language.
6.  Connect to your home’s Wi-Fi, by choosing the correct network and entering your password. If your stick needs a software update, it may ask you to do this now.
7.  Activate your Roku Streaming Stick using the code that will appear on screen. You’ll need to type the code into a computer by going to roku.com/link
8.  Create or log in to a Roku account.

It’s worth noting that while browsing Roku content is free, accessing some content to watch may not be. Services like Netflix have a separate fee per month. 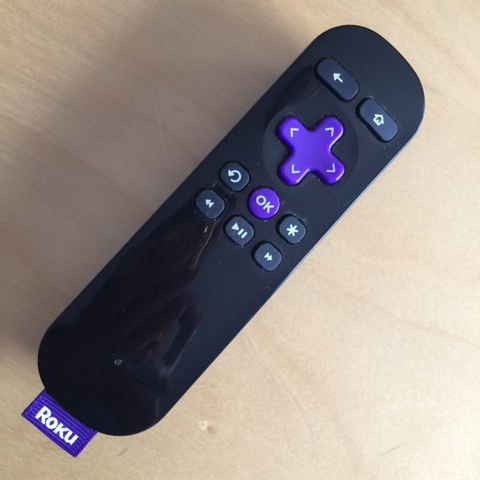 Remote Control with Roku
As I noted, the Streaming Stick comes with a remote. It features the basic controls you’ll need for playing, pausing, and navigating the menus. While some might find a remote extraneous, I find it handy since I don’t need to find my phone, unlock it, navigate to the Roku app, load it, and then gain control just to pause my show.

With that said, the phone app isn’t so annoying. You can use it as a remote control with the Roku device (and there’s a keyboard option in there too), plus you can search for content, browse for new channels, or to play back music photos or videos on your device.

Share content from your iPhone to the Roku Streaming Stick
Roku’s app will let you play videos made on your phone (home videos) to the streaming stick. Sadly for Apple users, it won’t allow you to AirPlay Apple content like movies and TV shows. For that you’ll need Apple TV. Nonetheless, it’s easy to share photos as if you had a big digital photo frame, even from Apple devices.

Portable TV
One other neat feature of any peripheral streaming device (though Chromecast and Roku are the two smallest) is that you can take them with you on the road. That’s a neat way to be able to watch your favourite shows no matter where you are, so long as there’s a Wi-Fi connection, you’re in business. Just don’t forget it in the back of the TV!

Streaming TV is a game-changer. No longer are you tied to fixed air times; you can watch what you want, when you want to, and go back to shows and movies again and again.

I’d love to hear which steaming device YOU have and whether you love it or want to switch. Share your experience in comments below.

Get a Roku Streaming Stick from Best Buy