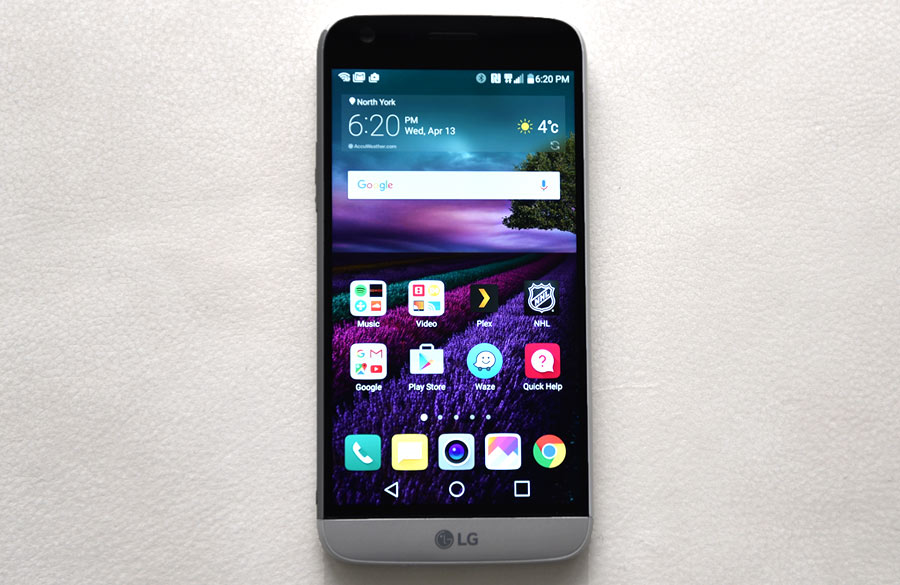 In some respects, LG has nothing to lose. Quietly building momentum with the previous two flagship smartphone iterations, the G3 and G4, the G5 has turned the company’s previous efforts on their heads. Having embraced an all-metal body for the phone, the design philosophy swerves dramatically to make it modular, too. Not only is the battery removable, but the idea is to enhance the phone’s features with hardware add-ons.

This might seem crazy, or unnecessary pie in the sky, but it’s the real deal. Too soon to judge what the modular strategy will yield for LG, its approach to the G5’s build and feature set does warrant serious consideration, nonetheless. This is a premium handset armed with excellent hardware, improved software and enough flexibility to rival the best in the business.

Going all metal meant LG abandoned its previous attempts at plastic and leather. Personally, I loved the leather backplates for the G4, not only because they were full grain and resilient, but also because they gave the phone a unique look no one else had. Metal isn’t a differentiator anymore, so LG going that route isn’t a game-changer, by any stretch, but doing it in a way where the antenna signal passes through is impressive engineering. Making the battery removable and adding hardware modularity to it is the X-factor the company is hoping will catch on.

The 2800mAh battery slides out from the bottom by holding down a release button at the bottom on the left edge. The battery can then detach from the bottom piece to accommodate compatible hardware accessories that could alter or enhance existing features on the phone. To date, there are only two — the Cam Plus and HiFi Plus.

The Cam Plus is a camera grip with a hard shutter button for still photos, a separate button for video recording and a dial for zooming in and out and switch between the two rear lenses. It also has a built-in 1200mAh battery to add to the G5’s own, adding up to 4000mAh total. The HiFi Plus raises audio fidelity boosts audio to high-resolution using a digital-to-analog converter (DAC), to upscale all music playing on the phone to better quality. More on those in a bit.

The power button on the back remains, and now doubles as a fingerprint sensor. The volume buttons have been moved to the side. The charging port at the bottom is now USB-C, the next industry standard, which is already being used by the Nexus 5X, Nexus 6P, HTC 10 and other handsets soon to follow. The Samsung Galaxy S7 and S7 Edge are two exceptions, sticking to microUSB.

There is a microSD card slot for memory expansion in the same slot as the nano SIM. It can handle cards up to 2TB in size, essentially offering almost limitless expansion from the 32GB internal storage. 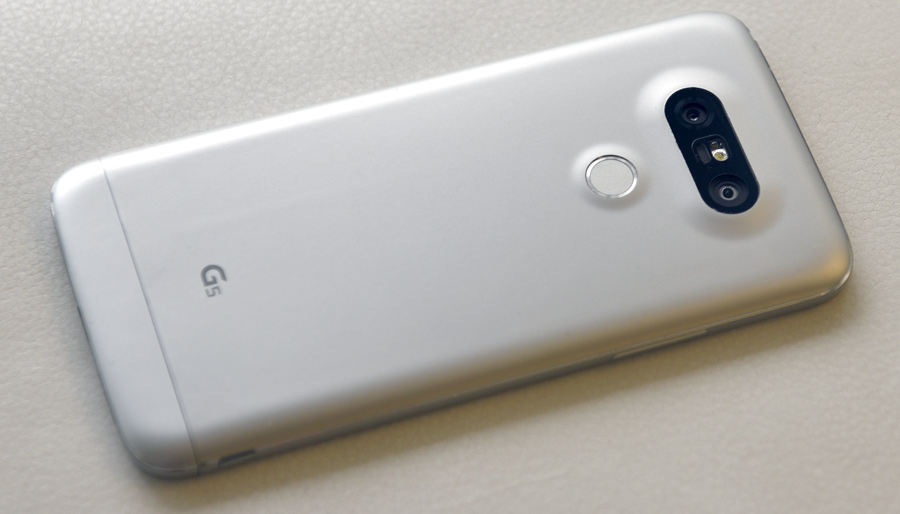 The 5.3-inch IPS display is 0.2-inches smaller than the G4 but doesn’t really feel like a loss. The resolution is the same and pixel density a little tighter with the G5. It’s also brighter, appears more vibrant and feels more responsive.

Running on the Snapdragon 820 processor, the G5 is a speedy device with plenty of fluidity in its overall performance. It’s a workhorse that feels like a thoroughbred.

Software has long been LG’s Achilles heel. It wasn’t just the gimmicky features but also the aesthetics of its overlay that made the phone look less Android and more LG. Like other manufacturers, LG has dialed back its previous experiments and gone for a more holistic approach. It’s not exactly untouched stock Android, but it’s at least getting closer.

Icons now look like they belong on an Android device. The fonts used are nice. The menus less cluttered. It felt like a cleaning crew spruced up a place before someone new moved in. Strangely, LG removed the app tray, choosing to utilize a more iPhone-like layout where app grids just continue on by swiping to the right of the home screen. Stranger still is the decision to bring the tray back in an upcoming update. If you want one right away, there are several third-party apps available on Google Play that deliver.

LG continues to insist on including its own suite of apps, yet has learned to let users decide how deep they want to dive into them. They’re easy to find, though somewhat out of sight to lessen the impression of bloat.

The Management folder of apps are utilities that can prove useful. Battery saver and Battery usage are pretty self-explanatory, but they are laid out in ways that are easy to understand. For example, you can turn the saver option on to kick in when hitting 15% battery life to squeeze out considerably more usage from the phone’s basic features, like calls, messages and email. Smart Doctor sounds smart, but isn’t necessary to use. It provides tips and explanations for phone settings, but you can get better information elsewhere online.

Holding the home button triggers Google Now and On Tap, a sure sign that the G5 runs on Android 6.0 Marshmallow. This is a slightly modified take on it though. Doze mode is the battery-saving feature inherent in Marshmallow, but has either been rebranded or replaced by what LG has. That’s not necessarily good or bad, only a sign that the company isn’t convinced yet to give fuller reign to Google’s untouched version of the operating system.

The fingerprint sensor on the back is better than I expected. It’s not quite as good or convenient as front-facing ones, like on the iPhone, Galaxy S6 and S7 phones, and HTC One A9 and One 10, but is more than capable in its own right.

Lastly, there is the Always-On display. This shows the time, date and basic notifications (by app logo) when the screen is off and phone is asleep. It’s off by default, and can be turned on by going to Settings >

To me, the G4 was the best all-around smartphone camera of 2015. The G5 doesn’t mess with that, though it does add some key components to sweeten the deal. On the back, there are two lenses — one a standard 75-degree angle, and the other a 135-degree ultra wide-angle. These shoot at 16-megapixels and 8-megapixels, respectively, but in the latter’s case, it’s the widest angle I’ve seen on a smartphone to date. Capturing large vistas and wider subject areas was a cinch with a lens that wide.

Focusing is very fast, and the general controls are the same. The wide f/1.8 aperture, colour spectrum sensor and image sensor are carried over from the G4. Even the interface looks the same. A noticeable change was the Auto mode’s propensity for overcompensating on bright and dark scenes by going too far with the white balance, thereby affecting how vibrant or clean a shot looked. 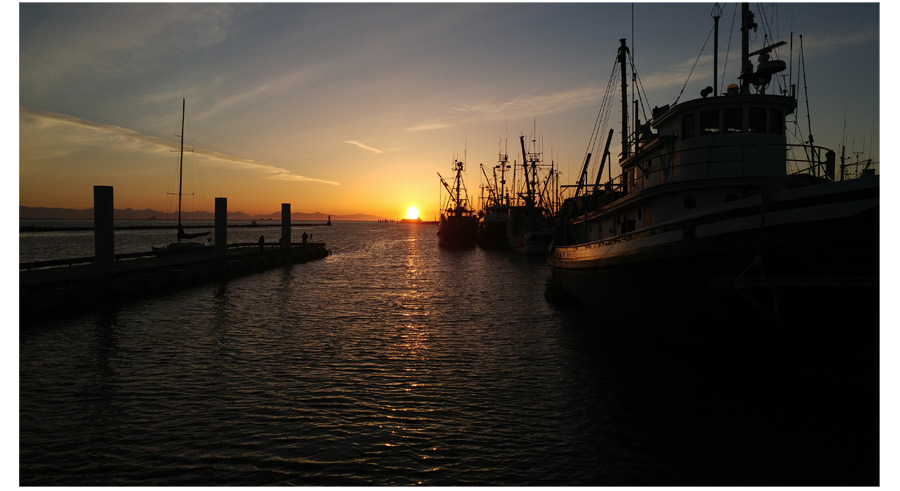 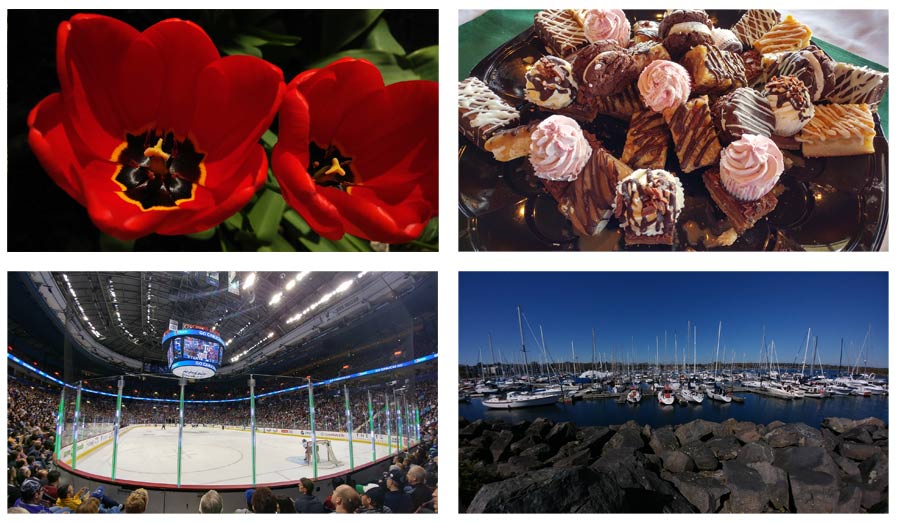 For me, the G5’s camera (like its predecessor) shone most when in Manual mode. It may seem daunting if you have no idea what the features mean, but since you see the results in real-time, you will find it easier to learn through simple trial and error. My suggestion is to play with the shutter speed setting first. Go to a slower setting for darkness or night. Faster for brightness or action.

In this mode, the camera is outstanding. Photo quality was consistently excellent, with rich tones, colours and sharpness. The wide-angle shots don’t offer much for cropping at 8-megapixels, but can turn out great when sharing online untouched. As good as Auto can be, it is really worth learning the G5’s manual mode to reach a different level for the phone’s camera.

I should note that LG added nine filters based on old film types of the past. These are pretty cool, and worth experimenting if you fancy yourself a more artistic shooter. You can use them to shoot stills, video and with either lens or shooting mode (Auto or Manual). The catch is that once you shoot something with it, the effect can’t be removed from the resulting image or footage — a benefit that many have enjoyed when using apps to apply filters after a photo has been taken.

The G5’s modularity comes into play with the fledgling ecosystem that supports it. Pressing the small button on the bottom left slightly releases the bottom piece to slide out with the battery in tow. Unfortunately, I didn’t get much of a chance to test out the Cam Plus or HiFi Plus, so can’t say much about their performance or how much they fundamentally change the G5’s performance.

I did, however, use the phone with a couple of products under the “Friends” moniker. These are accessories that don’t attach to the phone’s modular bottom, but rather work with it in other ways. The LG 360 Cam is a 360-degree camera that can be controlled by the G5 when paired with it. The LG 360 VR headset can playback that content in virtual reality. Unlike Samsung’s Gear VR, LG’s headset is lighter and smaller because it connects to the G5 through a cable, not placed inside the visor.

Pairing with them was fairly easy, and they each have their own apps to make it easier. LG has big plans for the Friends lineup and how users will be able to connect worldwide, but the key to the G5’s success lies in how its modularity is interpreted by both customers and third-party vendors. Bang and Olufsen is the first to answer the call with its HiFi Plus, and LG is hoping others will do the same. 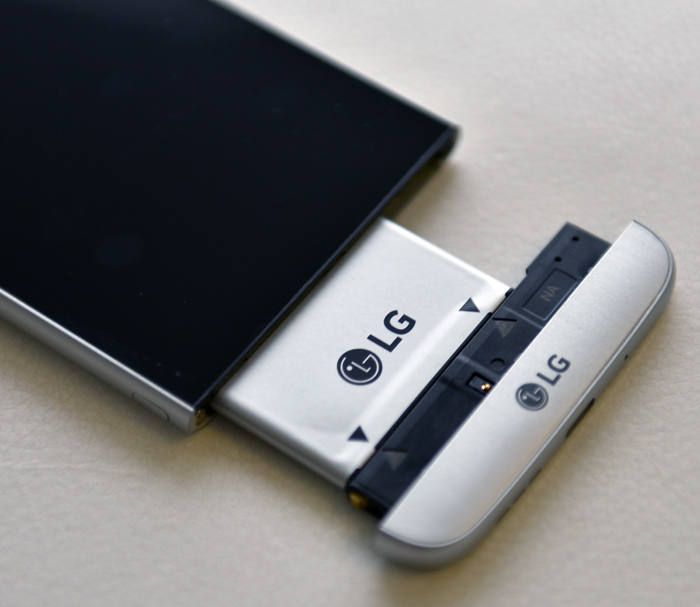 For a phone of this size, a 2800mAh battery actually seems small. Being removable helps alleviate some of that initial concern, but the G5 is a strong performer in keeping the lights on. The Always-On feature isn’t a hog that way, taking up about 1% per hour. With moderate usage, I was able to get through a day comfortably, never really worrying about having to charge back up. Light usage might be able to stretch that to a good 24-36 hours, but I suspect anything beyond that will probably require a nightly recharge.

For LG, the G5 is a valiant attempt to stand out from a crowded market, especially when it comes to Android smartphones. The modularity may not appeal to those who aren’t “techy,” but anyone could appreciate a battery that’s easy to replace, and on a metal body phone, no less. Coupled with a solid fingerprint reader, excellent camera and improved software, this is a top-class handset that is well worth a look.

The LG G5 is available now, coming in silver and titan.