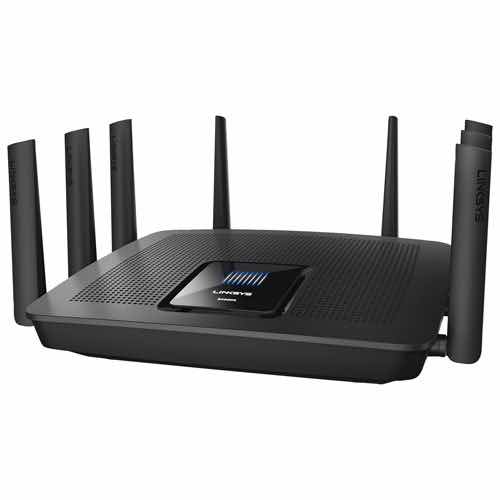 When I moved and began renovations on an almost 100 year old farmhouse, I wasn’t that concerned about choosing the walls, where the outlets would go, or what type of siding we’d use outside when it came time to redo everything. No, my main concern was that my old/new house would be a smart home, and over the past year I’ve added device after device to ensure that it is.

I started with Nest Protect Smoke Detectors, moved on to a fully monitored online security system, added several indoor and three outdoor Arlo cameras, and now have a full August Home Kit Smart Lock, Keypad, and Doorbell Cam on my front door. Add in my Withings Smart Scale, 4 iPhones, 3 tablets, 4 computers, two smart TVs, a Playstation 4 and an Wii U, and you’ve got a lot of devices relying on a solid Wi-Fi connection.

Despite my need for strong Wi-Fi, since moving here we’ve had the spottiest Wi-Fi known to man. I’m not sure if it’s the trees surrounding the house, the speed of our provider, or the sheer volume of devices connecting, but if everyone is hanging out on social media on our phones while we stream a movie on Netflix and someone is playing a game online in the next room, we get a lot of pause and buffering. I’ve had to restrict phone access during movies, and cut off online gaming if I’m uploading a large file of some kind.

That’s why, when I was asked to test the Linksys Max-Stream Wireless AC5400 MU-MIMO Gigabit Router in my smart home, I was all in. I’ve thought about having a more powerful router, but just like most people, I didn’t really think about routers beyond what my Internet provider set me up with.

After using it for two weeks, I was blown away by the speed and features on the Linksys Max-Stream Wireless AC5400. Here’s a look at how easy it is to set it up and how well it works in my smart home. 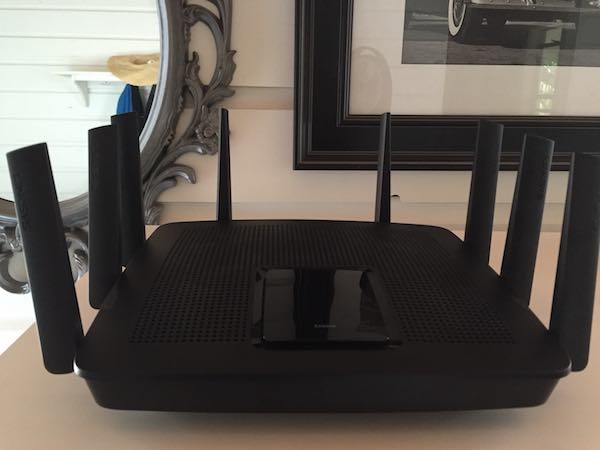 The Linksys Max-Stream Wireless AC5400 is the biggest router I’ve ever seen. It measures 11 inches by 11 inches and has 8 antennas it uses to provide you with maximum coverage in and outside of your home.

This isn’t a router you hide in the corner, and you’ll need a large space for it. I’d recommend on top a dresser or shelf.

The Linksys Max-Stream Wireless AC5400 is a powerful router that uses MU-MIMO technology to give you speedy Wi-Fi connections that are up to 3x faster than a traditional router. 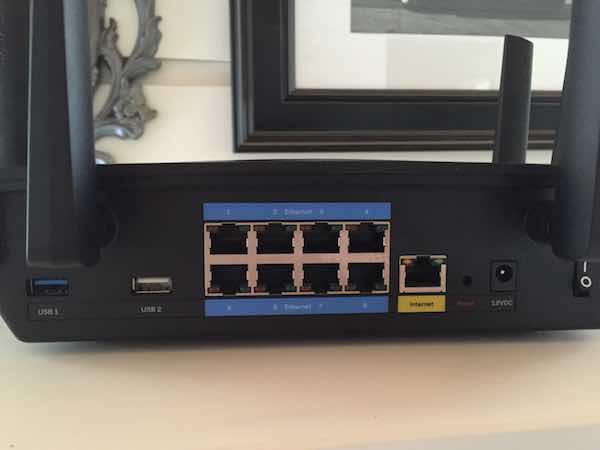 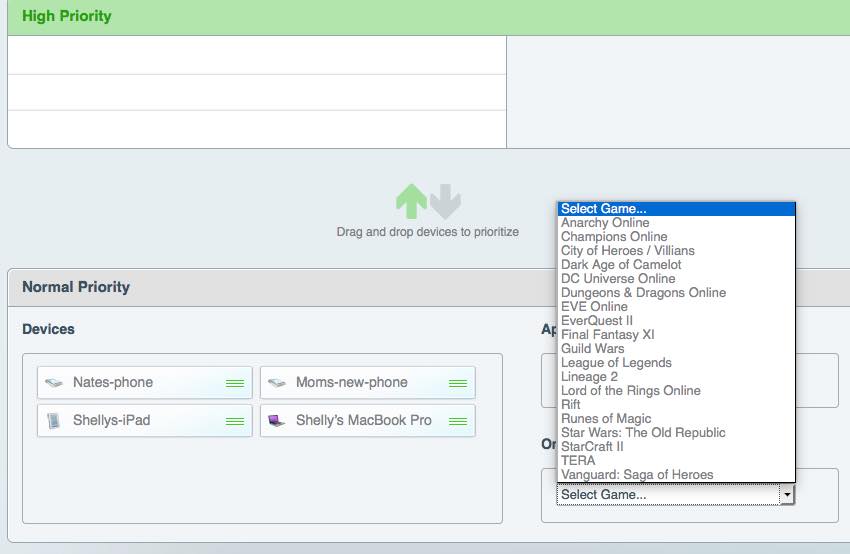 With all of these devices my house would be a challenge for any router, but I’ve used the Linksys Max-Stream Wireless AC5400 for two weeks straight and it has consistently delivered a steady stream of fast, lag-free Wi-Fi.

Before I could test it out I had to set it up first. Plugging it in was simple. All you need is a blue cable to plug into your existing router and power.

Once you’ve plugged in you can connect to Linksys Smart Wifi on your computer and set up your system. You have to set up an account first, but once in you’ll be able to rename your router, set up a new password for your access and guest access, and access custom features that let you allocate your media streams.

One of the coolest features on the Smart Wi-Fi setup was how you could tell your router to give certain games and applications a dedicated stream of Wi-Fi. There’s an entire list you can choose from to ensure you get lag-free gaming. 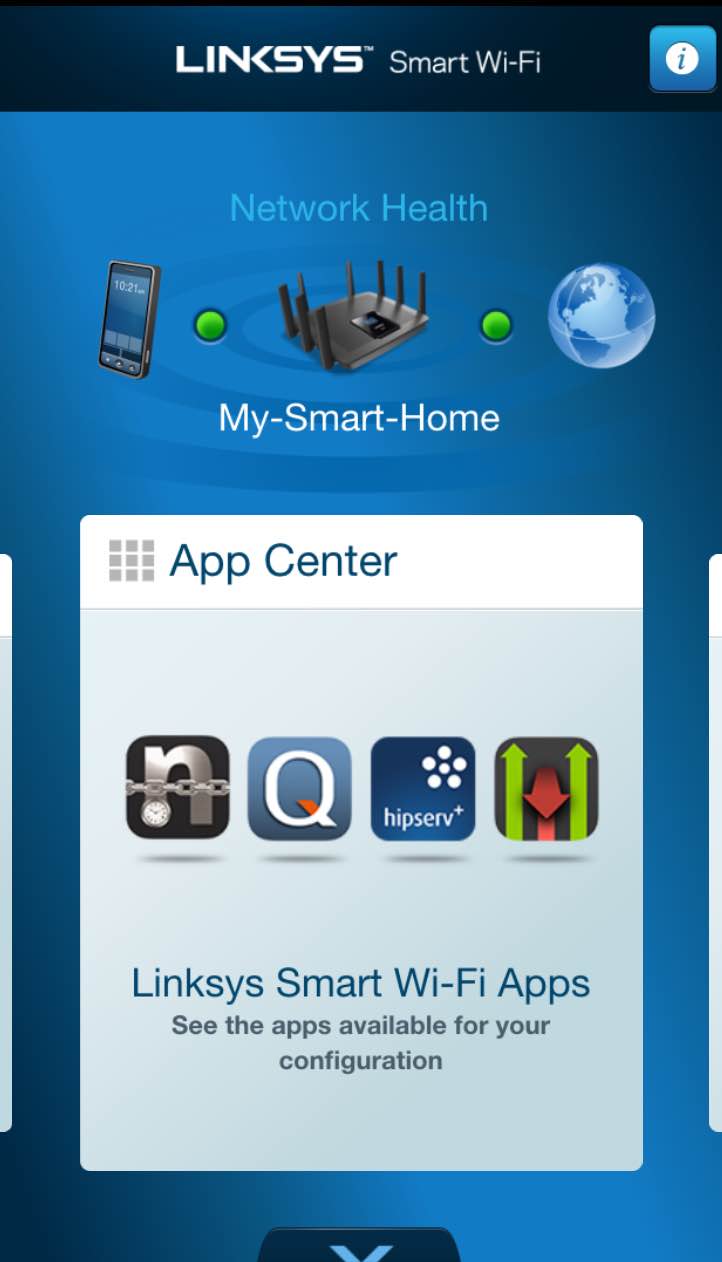 Linksys is THE smart home router

Obviously a smart home requires different levels of Wi-Fi connectivity. My August Home Kit system doesn’t need as powerful a stream of Wi-Fi as my smart TV for streaming video or my computer when I’m uploading a file, and within the Linksys website you can allocate Wi-Fi stream priority for all your devices.

No matter what I did, from 4K video to putting our computer way up in the attic in a corner, we got full bars and a lag-free stream. It was amazing, because this is a strange little house with a lot of solid, shiplap walls that our other router had trouble streaming through. Every single corner of our house was covered by those 8 glorious antenna, and I was in awe of how strong the Wi-Fi was for all devices.

This router also has something called MU-MIMO technology. It sounds fancy but the idea is pretty basic. What it does is give anyone connecting to the Linksys AC5400 the same access to the network and the fastest stream possible. It can give you speeds up to 3X faster than your standard Wi-Fi connection. 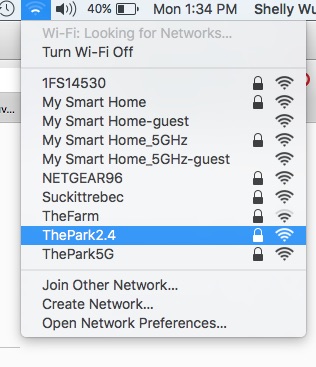 Eliminates the need for an additional range extender

As you’ll see in my video below, I’ve got a pretty big backyard. With 12 acres to cover, I’ve always wanted to add an Arlo wireless camera to the field. To do that I need Wi-Fi hundreds of feet away from my house.

My existing router won’t even let me walk through my home without losing a connection, but the Linksys AC5400 gave me two to three bars while I was out in the middle of my field. Even better, because the router has beamforming technology, I can set up an Arlo wireless camera out there and the Linksys will beam Wi-Fi straight out to it.

Take a look at my video overview of the Linksys AC5400.

Having a smart home is one of the best things I’ve ever done. I cannot explain the peace of mind I get from having the cameras, security system, and Wi-Fi connected door controls. The only problem is that having all these devices online all the time caused my Wi-Fi to lag, and I’m really glad I was able to test out the Linksys AC5400 because it was a very simple solution to my Wi-Fi problem.

You can pick up your own Linksys Max-Stream Wireless AC5400 on Best Buy right now. It’s the perfect addition to any smart home.