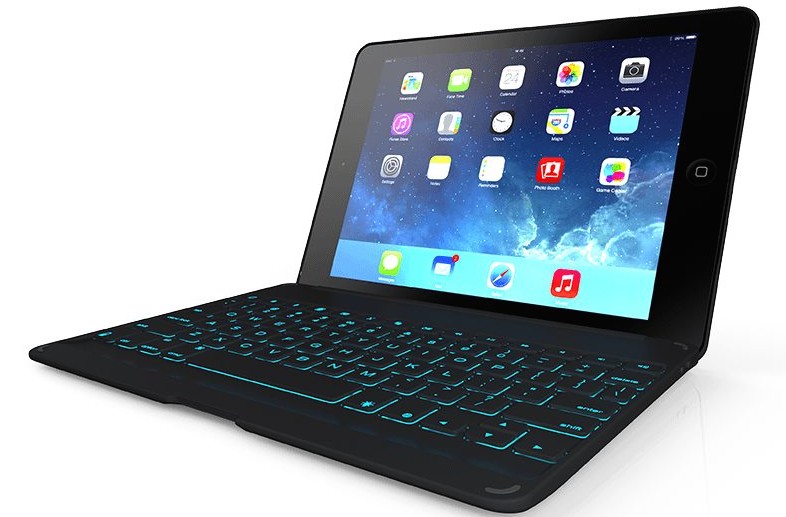 Now that Microsoft is offering a version of its ubiquitous Office productivity suite for the iPad, Apple’s tablets are even closer to being a device that can be used for getting serious work done. Mouse support and multi-window functionality in a future iOS version would be nice, but with a decent Bluetooth wireless keyboard, an iPad does a pretty good job these days. I took one of the best-known iPad keyboard solutions for a test run and was impressed by just how good the experience can be. The ZAGGkeys Folio for iPads not only offers a compelling Bluetooth keyboard, but it mounts it in a clamshell enclosure that transforms the iPad Air into an ultra-portable laptop.

How well does the ZAGGkeys Folio work? I wrote this post (over 1,000 words) using a ZAGGkeys Folio and my iPad Mini with Retina Display and it was virtually as fast as my usual PC-based writing setup. 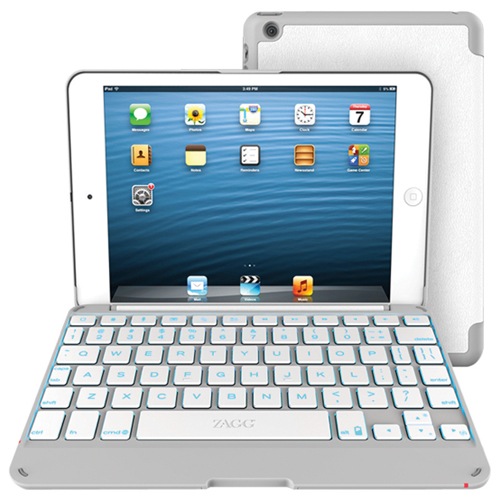 One of the great breakthroughs of the smartphone and then tablet was the touchscreen interface, including the virtual keyboard. Going virtual was a huge advance (although hardcore BlackBerry fans may disagree), as it meant device users could type text without relying on a built-in physical keyboard or having to plug in a keyboard.

That virtual keyboard is great for casual use, but it just can’t replace a physical keyboard when it comes to extended typing sessions. The virtual keyboard takes up a big chunk of the screen, it’s poorly positioned (on the same plane as the display) and makes touch typing impossible.

The keyboard on the ZAGGkeys Folio is surprisingly good. Even the version for the iPad Mini with Retina Display provides space between keys and decent-sized SHIFT bar. I found key responsiveness is very good –not mushy, not too stiff and with enough travel to let you know you’ve hit a key.

In addition to standard keys, ZAGG has some useful additions for the iPad experience, including shortcuts for the Home button, copy, paste, Siri and media controls. 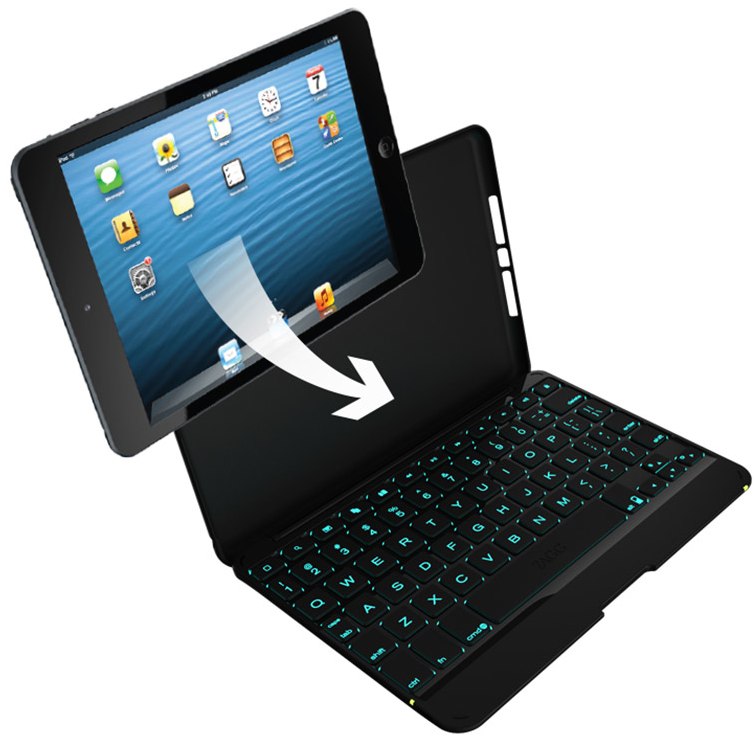 Installation in this case is as simple as slipping the iPad into the recessed ZAGG lid (it pops in quite easily), turning on Bluetooth on the iPad and pairing the devices. If you prefer a lighter look, the Folio is also available in white.

The ZAGGkeys Folio held the iPad securely in place, yet the plastic lip that holds it in place is soft enough to easily pop the tablet in and out on demand without risk of damage to either the case or the keyboard. If you do remove the iPad –for playing a game or using it in portrait mode– make sure to either turn Bluetooth off, or hit the virtual keyboard button on the ZAGG or you’ll find the iPad’s virtual keyboard is in hiding when you go to use it.

You’ll need to charge the ZAGGkeys Folio first. A MicroUSB port (cable is included) serves for charging. After two to four hours, ZAGG says you’ll get three months of typical use. After only a week with it, I can’t confirm the claim, but I can say the LED battery indicator (triggered with a dedicated button) says I’m effectively on a full charge after a few days of pretty heavy use.

One of the most useful features on any keyboard and the ZAGGkeys Folio has it. Not only that, but the colour is user configurable by cycling through a keyboard light button (brightness is also user configurable). Using backlighting will shave down the 3 month claimed battery life, but the feature is well worth it. 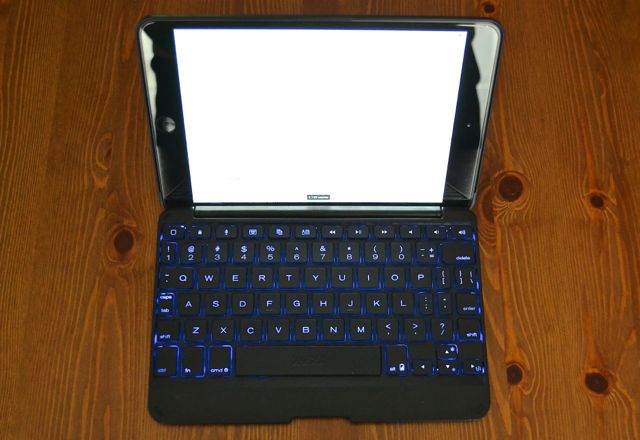 The ZAGGkeys Folio’s full case approach doesn’t just make it a champ for working on, it offers complete protection for your iPad. As a protective case, the expected cutouts are all there so you can plug in a Lightning cable or headphones, snap a photo and listen to music (in fact there are shortcut keys included for controlling music directly from the keyboard).

The ZAGGkeys Folio also supports Apple’s magnet-based Instant Wake feature, so closing the case puts the iPad to sleep while opening it brings the iPad to life.

No product is perfect, but I have very few complaints about the ZAGGkeys Folio.

The version for the iPad Mini with Retina display haas the least space to work with, so that means some keys are smaller than I’d like –the SHIFT and ENTER keys, in particular (no such issue on the larger version for iPad Air).

Because of the narrow side bezel on the iPads, the bottom edge of the display ends up almost touching the the hinge of the ZAGGkeys Folio and that makes it difficult for touching screen elements at the bottom extreme (smaller fingers or a stylus would help there).

Finally, the biggest issue is the top-heavy nature of having an iPad mounted as the display with just a plastic keyboard to balance that mass. When typing, that’s not a problem, but touch the iPad and it’s a little too easy to push the whole thing over. I’d love to see iOS incorporate mouse support (which would pretty much eliminate this problem), but since that seems unlikely to happen it would be useful if ZAGG slipped a metal plate in the base to add a little more heft and balance to the device. I’d rather have to carry a little more weight than have to be on guard to keep from poking my iPad over.

Should You Buy It?

If you want to turn your iPad into the ultimate portable laptop replacement, then you’re going to have a tough time beating the ZAGGkeys Folio. 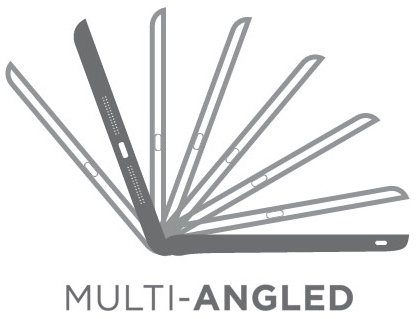 The multi-angle adjustable clamshell case really does make your iPad feel like a lightweight laptop. And the keyboard is a good one. The keys have a decent amount of travel and while some compromises obviously had to be made because of the iPad’s small form factor (especially in the case of the 7.9-inch iPad Mini), ZAGG did a really good job of making those tough design choices without resulting in a keyboard that sacrifices too much.

If you primarily use your iPad for casual stuff like playing games, web browsing or watching video, then the ZAGGkeys Folio won’t do much for you. Sure, the keyboard will make shooting off an e-mail easier and the case does offer protection from bumps and falls, but the clamshell form factor does not work well for those uses. You can pop the iPad out easily enough, but that’s a pain to do continually.

However, if you’re looking to make your iPad into a mobile workstation, then yes, the ZAGGkeys Folio is one of the best ways to do so. This is exactly the sort of setup I’ve been looking for as a mobile workstation (I hate the room a laptop takes up when I’m travelling) and it would be ideal for students.

Check out the ZAGGkeys Folio and other keyboards for your iPad, Surface or Android tablet at Best Buy.