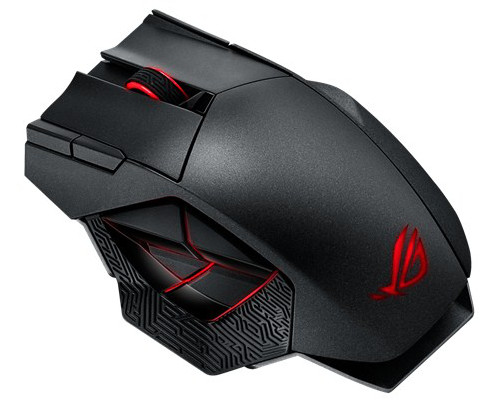 The ROG Spatha Gaming Mouse is the new high performance, MMO-Focused mouse from ASUS, the newest offering in their line of computer accessories. I have to be honest: when the mouse arrived and I started looking at the box, it took me a little while to realize that the ‘ROG’ in the name of ASUS’s new mouse was an acronym that stands for ‘Republic of Gamers’. In my mind, ‘Rog Spatha’ sounds like a minor Star Wars character: She could be a scrap merchant, or a moisture farmer from Tatooine. As usual, my imagination is entertaining but completely wrong.  (As an additional bit of bonus knowledge, a spatha is a Roman long sword that was also used in gladiatorial combat. Learning!) Eager to get my hands on the mouse and give it a try, I dug through the packaging and took the mouse for a test drive. 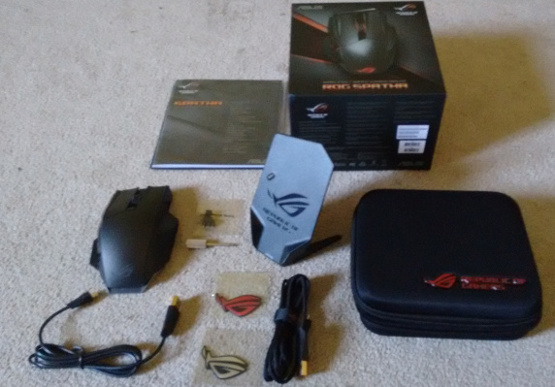 You can tell you’re dealing with a top end peripheral when the associated components have their own fancy case. The charger, cables, decals and replacement switches are tucked away in a surprisingly hefty zip up carrying case (shown on the right of the picture). The separate case for components seemed unnecessary until I clued in that you’re supposed to remove all the pieces and then use the case for the mouse itself. It was not my finest moment of deductive reasoning.

AT 8200 maximum DPI (dots per inch) the ASUS ROG Spatha falls into the middle to top range of mouse sensitivity. DPI measures how far the cursor travels on the screen in one inch of mouse movement. Running at 8200 during a high intensity game is challenging, as the sensitivity means every tiny gesture sends the cursor flying across the screen. The elite competitive gamers can handle and utilize the sensitivity, but the average enthusiast will be more comfortable at a smaller DPI value. The ROG Spatha has an incredible 2000Hz polling rate (when connected via the USB cable). That translates into a 0.5 millisecond response rate, from when you move the mouse to when the movement registers in the game. That’s very, very fast.

These Japanese-made micro-switches have a reputation for being some of the best built and most dependable in the world, and the ROG Spatha uses them for the two main mouse buttons (good old left and right click). There are 2 replacement switches included with the mouse, so you can swap out the original switches when they eventually wear out (after millions of clicks. They are sturdy). The replacement process is easy and quick, and the screwdriver needed is helpfully included in the Spatha’s accessories. 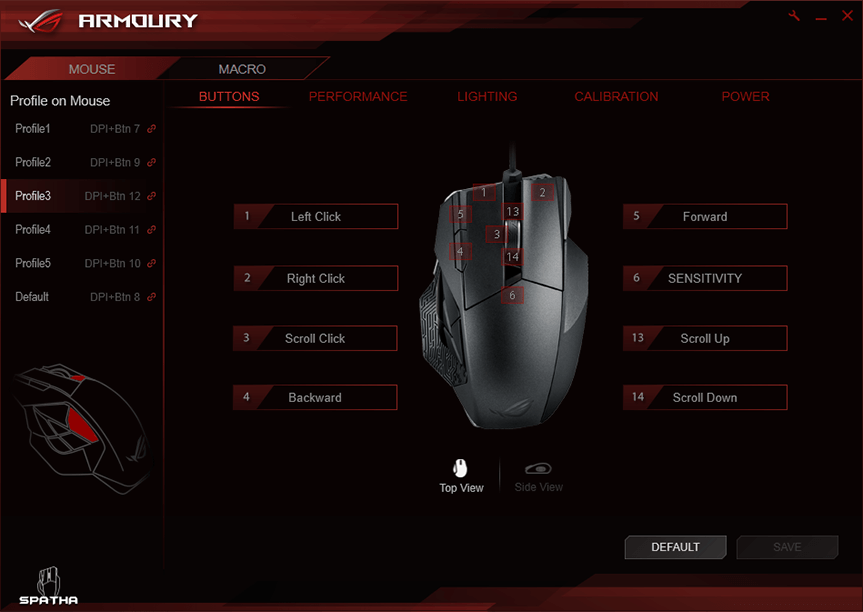 Primarily, it’s the customized button layout that you need to set to get the most out of the Spatha. The MMO focus of the mouse comes in the form of the 12 programmable buttons, enough to thrill the heart of the macro-loving MMO heavy hitter. The button programming is pretty straightforward: you input the series of keystrokes that you want to be triggered and assign that macro to your preferred button. By default, the top 4 buttons have functions. The buttons to the left and right of the scroll wheel are (as expected) the left and right click, and the two smaller buttons at the top left of the mouse are forward and back browser buttons.The sensitivity of the mouse is also customizable, and that was my next stop in the set-up process. At the maximum sensitivity setting of 8200 DPI, the cursor flew across the screen faster than I could handle, so I dialed it down to a more leisurely 2400 DPI. You can even set the distance needed between the mouse and the surface below to shut off the laser and freeze the cursor. Power settings can be tinkered with to prioritize longer battery life.  And the colours being displayed in the three LED light areas are also fully customizable, either independently or linked together. I dove into the light setup and spent more time picking the perfect display than I would ever admit in public.

The ROG Spatha is a well built, precision mouse that has great performance. The button layout presents a challenging learning curve for the average user, but the customizable functions and fast response time make up for it. It stacks up well against the other gaming mice available. Keep your eyes peeled for it on store shelves soon. Until it arrives, check out all of the other Gaming Mouse options.