Best Buy Blog
Home Computers, Laptops & Tablets UPS: how it works and why you need one

The name says it all. A power supply that’s always there. It sounds simple, but there’s actually a lot of technology involved. Not only that, but there’s a science to picking which UPS is right for you.

There are multiple categories of UPS designs: standby (or off-line), line-interactive and on-line. For the purposes of this discussion, I’m looking at the standby/off-line UPS, which is the design most commonly used for a UPS targeting the home and small office.

Here’s how it works. The UPS is a device that often looks like an oversized power bar or surge protector. It actually has elements of both of these in its design. The typical UPS offers a series of power outlets, each backed by surge protection. That way, anything that’s plugged into the UPS is protected from the potentially harmful effects of power surges and variations in voltage. There will be multiple outlets that are designated as being protected by battery backup.

And that’s where the “magic” happens.

The UPS is bulkier than a power bar because inside the case is a battery—usually lead acid, which is larger and heavier than newer technology like lithium ion, but offers the advantage of lower cost and long life in terms of discharge cycles. There is also a DC-AC inverter and circuitry to detect voltage variation. When the UPS detects that the power has dipped to a level that would normally result in any electrically powered equipment shutting down, it mechanically switches the designated outlets to battery power, delivered via that DC-AC inverter. Your computer and any other equipment plugged in to the battery backup outlets of the UPS seamlessly continue operating, now powered by the battery.

Depending on the UPS that you choose, at the point of switchover you’ll be alerted by a beep, flashing light and possibly UPS software on your PC. APC UPS models, for example, include PowerChute software that kicks in to provide details and the ability to automatically shut down the PC if the battery is in danger of running out. 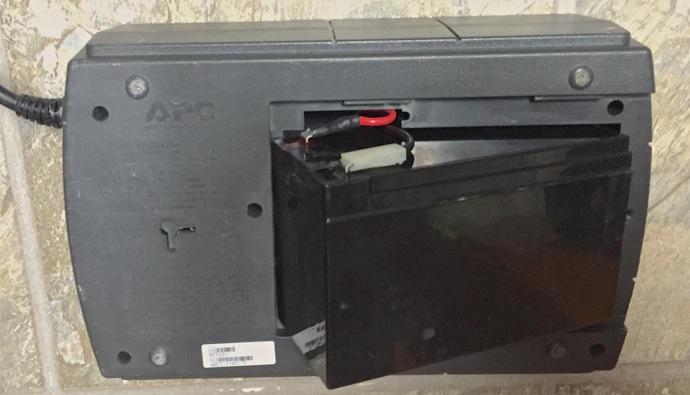 The battery inside my UPS

Now you know the basics of how a UPS works, but that doesn’t answer the question of why you’d want one. That’s actually a two-parter.

Even the slightest power loss, like the split-second brownouts that last just enough to force you to reprogram the clock on your stove and coffee maker, are sufficient to also shut down your PC. That means having to go through the process of booting up, relaunching the applications you were using and finding the file you were working on. Any process you were in the middle of—such as compiling a video file—has to be started over. And many PCs will run a diagnostic check whenever they restart after having the power cut, taking up even more time. When the power is flickering on and off (as it may do during conditions like thunderstorms or during periods of construction), having to restart multiple times can really cut into productivity.
With my own UPS setup, I can run my computer for about 10 minutes on battery power alone. That lets me keep working through those power flickering periods with enough warning to save my work and shut down properly if the power outage is an extensive one.

Losing Power Can Damage Your PC

One of the worst things you can do to your computer is to pull the plug while it’s operating and that’s exactly what happens when a power outage hits.

There’s a reason why Windows and OS X have a “Shut Down” option and that’s to allow the PC to gracefully complete any operations currently underway. When you shut it down, the computer doesn’t actually power off until files are saved, applications are closed and any OS-level operations are complete. When a computer unexpectedly loses power, any un-saved progress on files is lost and some files can be corrupted. That can result not just in lost work, but in the computer acting erratically—not always immediately either, sometimes damage at the OS level makes itself known over time resulting in days or weeks of frustrating glitches.

Recovering from the file corruption caused by a power outage may require running system repair software or in a worst case scenario, either restoring from a backup or re-installing the operating system.

In other words, you do not want your PC to abruptly lose power. A UPS buys you the precious minutes needed to save files and shut down properly. 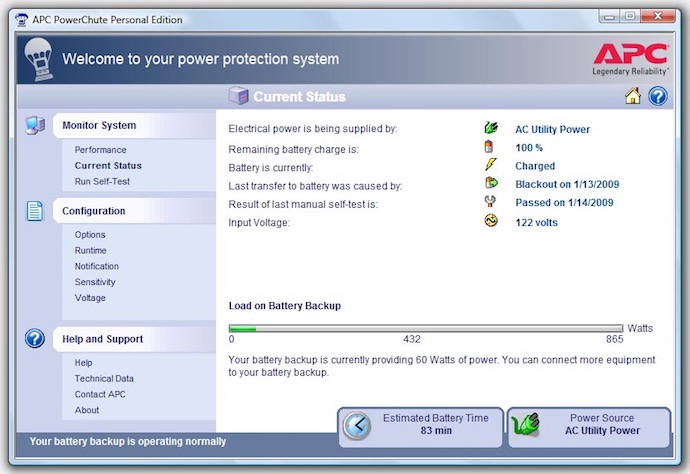 Not Just for Computers

It’s not just computers that can benefit from UPS protection. Virtually any mission-critical electronics that rely on electrical power are candidates. For example, when I worked in IT, many companies would have their telephone systems plugged into a UPS. I also know of hardcore gamers who plug their console, TV, wireless router and cable modem into a UPS. If they’re in the middle of a critical match, a short power outage won’t knock them offline.

Make Sure to Get Enough UPS for Your Need

Before you invest in a UPS, you need to know what equipment needs battery backup and how much power is required to run it. For example, if you want to protect your computer, you’ll also need to account for your monitor or you’ll be operating in the dark, literally. There’s a balance to be struck though, because the more devices drawing power from the UPS, the shorter the period of time you have before its battery drains.

If you want to run a typical PC and its monitor for five minutes on battery power, an inexpensive UPS rated for home use should cover you off. That’s plenty to work through a brownout or surge, with time to shut down if necessary. If you want to run a PC with multiple monitors, an external hard drive, router and cable modem (to keep internet access live) for 30 minutes, that’s a much more expensive UPS investment. To fine-tune things, you’ll need to know the power requirements of all equipment to be connected, and the specs of the UPS.

An uninterruptible power supply—or UPS—uses a backup battery to ensure your PC doesn’t shut down abruptly during a power outage. It also provides protection against power surges. By preventing your PC from having its power cut without shutting down, the UPS protects from issues such as unsaved work being lost, file corruption and potential harm to sensitive components. All you have to do is choose the appropriate UPS for your computer and plug it in.

No UPS in your home? Summer is here. That means thunderstorms and prime time for power surges, blackouts and brownouts. In other words, now is the time to protect your computer (or other critical electronics). Best Buy has you covered, with UPS options to fit any need from a personal PC to small business, and models to fit every budget. 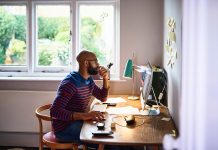