Is there a hardcore gamer in your home, someone looking for every advantage possible in multiplayer video games like Fortnite? An Xbox fan who’s complaining about lag in online gaming? Or maybe your Wi-Fi network just isn’t cutting it any longer and you want to put in a new router with the technology and power needed to ensure your home’s wireless performance impresses, even when 4K video streams fire up. The ROG Rapture AC5300 tri-band Wi-Fi gaming router from ASUS may just be the ultimate solution to all your wireless networking challenges—especially when gaming is involved. Out of the box, the ASUS ROG Rapture is clearly not a typical Wi-Fi router. There’s no attempt to blend in. It’s big, it’s aggressively styled in asymmetrically angled black plastic, its bristling with antennas and the Republic of Gamers logo dominates the top in bright red. The back of the router is a wall of ports and the front has a row of six LED indicator lights. Just looking at it, there’s a clear impression that this thing is all about performance.

To get the full effect of what the router is capable of, you need to keep it out in the open, not stuffed out of sight in a closet. Some people may like the look, others may wish for something a little more discrete. Based on the several weeks I had it set up in my house with those antennas sticking in every direction and the angled sides, be prepared for a new dusting challenge … The ASUS ROG Rapture AC5300 is packed with the latest in 802.11ac Wi-Fi technology, as you would expect from a router in this class. That includes features like beamforming, MU-MIMO, Smart Connect and three bands. If you want more information about what these features mean, check out my recent explainer on Wi-Fi technology. Rather than talk about these, I want to focus on three key areas that ASUS says will “accelerate” your gaming experience.

The ROG Rapture has eight Gigabit Ethernet ports for wired connections. That alone is more than you’ll find in most routers and reflects the fact that gamers often prefer a hard-wired connection to wireless. The Rapture goes a step further by designating two of these as optimized gaming LAN ports. Traffic to and from any devices connected to these ports get top priority.

This feature analyzes network traffic and any packets it detects that are related to gaming get further prioritization. Game Boost supports most recent game consoles including the Playstation 4 and Xbox One.

Hands on with the ASUS ROG Rapture

My focus with the Rapture was Wi-Fi performance. My kids have an Xbox in the basement, they’re obsessed with Fortnite and I had been getting complaints that they were having issues with lag. At the same time, we recently upgraded our primary TV to 4K. So now there are often multiple simultaneous 1080p video streams, plus a 4K stream, plus the usual assortment of smartphones and PCs, plus a growing collection of connected devices, plus smart speakers and then two guys grousing that they’re getting unfairly taken out in Fortnite because the wireless network will suddenly get laggy.

Oh, and I also added a new grill to my “BBQ pit” (it’s actually a gazebo) at the far end of the back yard, and it’s Wi-Fi connected. And the Arlo Pro 2 wireless cameras I reviewed a few months back are still set up outside the house and streaming. In other words, the time was right to try out the Rapture to see if it has the muscle to deliver. And the experience was just as compelling as might be expected, given the lengthy list of features. The gamers were happy. Repeated checks of Xbox connectivity showed a high speed connection with low ping rates. The downside to that was Fortnite defeats had to be blamed on something other than lag. They also had the opportunity to play the PC version, on an ROG Strix gaming laptop ASUS sent along as part of the review. Video streaming from Netflix, iTunes and my local iTunes server was immediate, even from 4K sources. The Wi-Fi connection in the back yard was solid. This is Wi-Fi router is an investment, but it delivers …

Who needs a router this powerful?

The ROG Rapture is a strong contender for being the most powerful Wi-Fi router I’ve ever tested. I don’t think there’s any contest when it comes to routers designed to deliver the best possible online gaming experience. Frankly, it’s probably overkill for most homes and the form factor isn’t exactly decor-friendly. However, if there are gamers in your home who have complaints about latency and lag, installing a ROG Rapture should immediately put an end to that … It’s also a very powerful solution if you’re looking for high performance, whole-home Wi-Fi without having to deploy the multiple units of a mesh system.

Whatever your Wi-Fi needs, Best Buy has a new router that will do the job, including basic 802.11ac routers, mesh networking solutions and the latest generation, high-performance tri-band routers like the ASUS ROG Rapture AC5300. 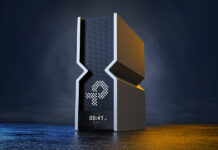