Best Buy Blog
Home Back to School Back to school: the case for choosing a desktop PC With the start of school rapidly approaching, the rush is on to make sure students have the gear they need. The biggest purchase for most will be a computer, so you want the right one and making the right choice starts with picking the right form factor. A few days ago, I made the case for choosing a traditional laptop. This time, I’m going to switch hats and make the argument for choosing a desktop PC.

Why would anyone skip the compact and portable goodness of a laptop—or the ultra slimmed-down alternative of a tablet—especially if they’re shopping for a computer to be used for school? There is no arguing the fact that portability is a plus, but desktop PCs come with three big advantages: power, expandability and cost. For many students, one or more of these variables comes into play, making a desktop PC their best back to school choice.

When it comes to a computer, no matter how you measure power, a desktop PC will always offer more than any laptop in its price range, And when it comes to extreme power, desktop PCs reach levels that even the most expensive laptop can’t come close to.

Desktop PCs win the processing power contest. Laptop CPUs have been getting far more capable than they used to be, but when it comes to raw processing power, mobile CPUs aren’t directly comparable to their desktop equivalents. They’re smaller and both power consumption and heat are big challenges, so the laptop CPUs typically run at lower clock speeds. A high end gaming laptop may offer an Intel Core i7 CPU—a very powerful processor. But when you compare that Core i7 to the Core i7 available for a desktop PC, you’ll find some significant differences. The high end Core i7 designed for desktop PCs will have four cores, instead of the two in the laptop version. And the desktop Core i7 will have a higher clock rate as well.

Besides the CPU, another huge “power” advantage goes to the desktop PC in its ability to use a graphics card with dedicated video RAM. Most laptops use a built-in graphics processor on their CPU and share RAM with the processor. Some gaming laptops do have graphics cards, but they are relatively small ones due to the incredible power demands and heat generation.

The video card naturally makes it possible for a desktop PC to generate higher resolution graphics with far more effects (making this the form factor of choice for PC gamers), drive multiple big screen monitors and also boosts capabilities when using software where the GPU is used to supplement the CPU’s power. This ability to harness the video card for non-graphics processing is why computers used for Bitcoin mining were often rigged up with multiple cards.

Gaming, the ability to drive big high resolution displays and high-powered number crunching are all capabilities that often come into play for students, especially those in high school and post-secondary programs.

Desktop PCs offer a degree of expandability that no laptop can approach. Pop off the case and adding RAM is a thirty-second operation. You can unplug and swap out the hard drive for a larger capacity model or an SSD—you may have room to plug in a second drive! Good luck fitting a video card like this in a laptop …

Most components can be replaced and upgraded, if not by you then by a trained technician from a service like Geek Squad. There are often a few spare slots for adding new functionality. Choosing a desktop PC not only means you can expand the capabilities of the computer over time, adding new functionality as needed, but you can also upgrade components to keep the computer current. That means a desktop PC is not only more capable than most laptops, but because key components can be upgraded as they become obsolete, a desktop PC can remain functionally useful for longer than most laptops.

That expandability extends to peripherals as well. Laptops usually have a few USB ports and video out, plus maybe an SD card clot. Desktop PCs typically have far more in the way of output ports, so more accessories can be plugged in without having to resort to adapters and hubs. And while the inclination is to use the built-in display of a laptop—which is typically 15-inches and Full HD—with a desktop PC, you pick the monitor size and resolution you want. 40-inch 4K Ultra HD widescreen? No problem! A pair of 34-inch WQHD curved displays? Plug ‘em, in. Even if your desktop’s video card isn’t up to the task, simply upgrade it for the graphics performance you need. Any student in a graphic arts, design or film program will appreciate having not just the power of the desktop PC, but its ability to handle a growing collection of peripherals and a big, Ultra HD display.

A laptop is chock full of miniaturized components, and any time you have to take something and make a version that’s just as effective but smaller, and more power efficient, it’s going to cost more. You also have an expensive, Lithium-Ion battery and an LED backlit display as part of the package. And to keep weight down while offering as much strength as possible, many laptops are made of expensive materials like aluminum and carbon fibre. A desktop PC case doesn’t need the same sort of strength and light weight. Its components are full-sized and it doesn’t require a battery capable of keeping it running for most of a day. That means a desktop PC will be less expensive than a laptop with similar capabilities. And when it comes to back to school shopping, everyone likes to save money …

The potential savings are especially noticeable if you already own accessories that can be used with a new PC. The keyboard, mouse and monitor can all be taken from the old PC and plugged into the new one (no such luck with a laptop’s built-in components). And when your new PC finally reaches its end of life, those peripherals can be re-used again, helping to keep down the cost of the replacement.

Looking for more back to school gear advice. Plug-in writers have you covered with a long list of posts including essentials for every backpack, dorm room tech essentials and why students should be using Windows 10. 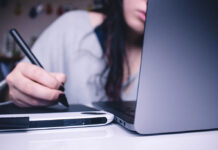