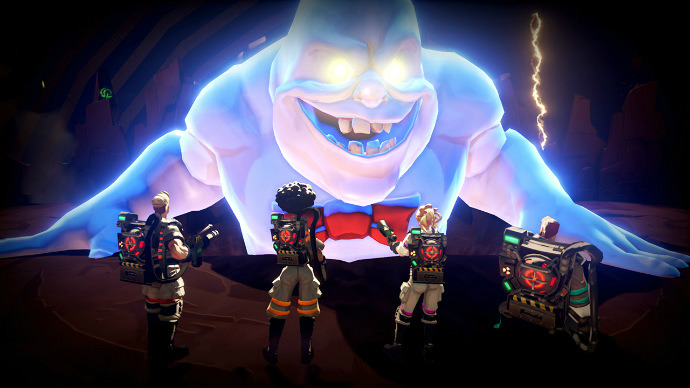 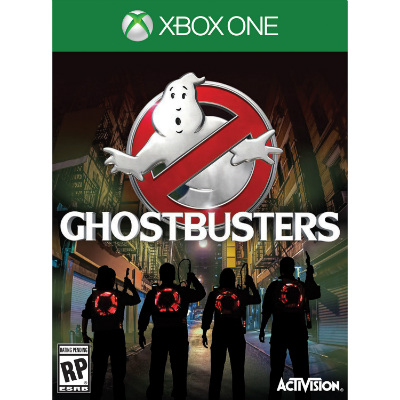 A new cast of Ghostbusters

Grab your Proton Pack and join the Ghostbusters in their latest adventure on the Xbox One and PlayStation 4 from Activision and FireForge Games. This original adventure takes place shortly after the events of the new Ghostbusters film, and you will play as a memeber of a rookie squad of four. Making appearances in the game are some of the most terrifically terrifying classic Ghostbusters characters such as Slimer, Spark, and Gertrude Eldridge.

Including fun for the whole family, each of the Ghostbusters heroes have unique personalities and attributes that can be upgraded with new gear and abilities as you progress through the game. With the ability to play alone by yourself or with up to three other friends in local co-op action—Ghostbusters turns into a party-based game that is fun for the entire family.

Platform: Xbox One, and PlayStation 4

Set in a supernatural world, the four women from the Ghostbusters movie have taken their shown on the road and are busting ghosts for the president of the United States. New York City is left in the hands of a rookie squad of ghostbusters who vow to rid the city from ghouls and ghosts while the girls are kicking butt and taking care of business in the nation’s capital. The game refers to the girls in the current movie during the opening cinematic, but that is as close as you will get to hearing about the girls from the motion picture.

As stated above, this original adventure puts you in the shoes of a rookie squad composed of two females and two males. Each character comes equipment with their own unique weapon, whether it is a shotgun, proton assault rifle, proton mini-gun, or dual proton pistols. While the weapons look cool and I was initially impressed, I cannot really ever recall any Ghostbuster using weapons like these at all to fight ghosts. Luckily, you can switch to your Proton Pack for more authentic ghostbusting gameplay.

The game’s plot pretty much copies the movie’s plot point for point, which can be both good and bad at the same time. You see, you’ll travel all around the city trying to catch all the ghosts that escaped from girls in the film. I was ok with this, but when there are only two original bosses added to the game that are not already in the motion picture, I felt a little let down. 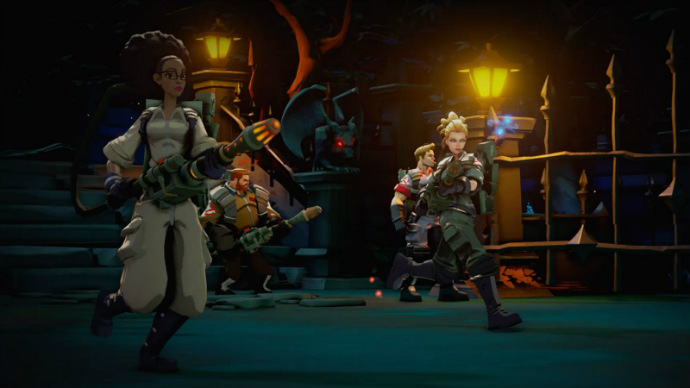 Ghostbusters sports an overhead isometric third person view, which gives you a good view of all the on screen action. Essentially, Ghostbusters is a dungeon crawler like Diablo, but without an open world to roam in. You can power up each character after completing a level, although there is not much depth to it at all. You get the standard upgrades such as improving weapon damage, movement speed, health, etc.

Powering up your character is fun and all; however, you really will not see much of a difference from your stock Ghostbuster. Adding an element of strategy, your guns can overheat if used too much. You’ll need manage these carefully by using the exhaust button that cools them down.

The game’s level design offers a good variation that initially will keep your interest; however, as you progress through the game, the levels are far too big and spread out. Some of the earlier levels take 5 minutes to beat, while others can last as long as 45 minutes. Occasionally, you will come across a powerful ghost that you will have to catch in a trap. This triggers a minigame, which requires you to move the thumb stick in the reverse direction of the ghost and feverishly press buttons to score multipliers. 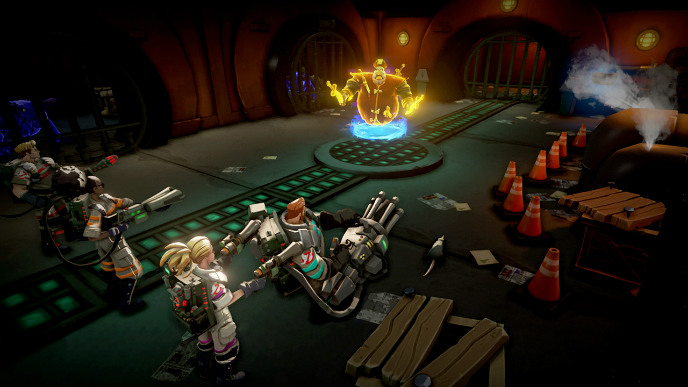 Vibrant graphics with a classic soundtrack

Powered by the Unreal Engine 4, Ghostbusters has a 80s style cartoon appeal with bright vibrant colours that I absolutely love! FireForge Games did a great job creating an environment where the ghosts, ghouls, graveyards, and haunted mansions look horrifically delightful. While not earth shattering, Ghostbusters graphics and opening cinematics are the highlight of the game.

The music in Ghostbusters is fantastic! As soon as you boot up the game the classic Ghostbusters theme song plays that sets the tone. The game’s characters have a lot of energy and banter, but the humour does not come across that well. 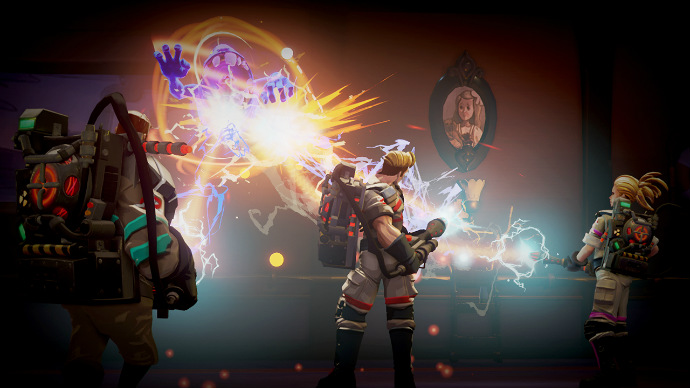 Quite possibly one of the top features of Ghostbusters is its four-player local player co-op mode. While it is still the exact same game as the single player mode, you can now have up to three other friends join in on the action. Althought Ghostbusters is not that hard of a game to get through, playing with friends and family makes the experience more enjoyable.

I did notice while playing with friends, that it appears as if the difficulty of the game does take into account the number of players. Thus, a game that is already fairly easy is even easier the more people you get to join you. While an online multiplayer option is missing, I think that Ghostbusters is best enjoyed with family and friends around you. 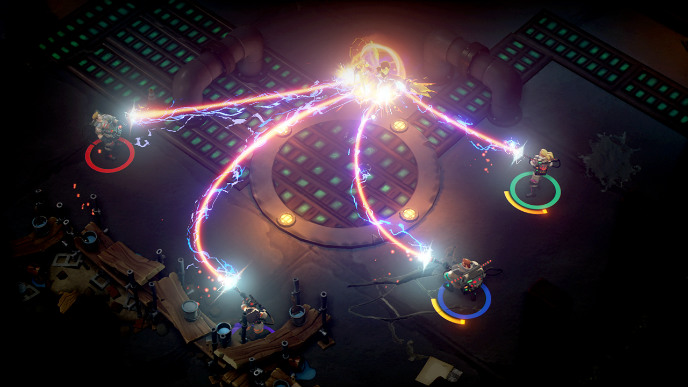 Overall Ghostbusters left me with mixed feelings. There are parts of the game that really standout like the character design, graphics, and the local co-op four-player mode. On the hand, levels vary in size and ultimately causes you lose interest in the game.

With that said, younger players looking to play a game with family and friends on the couch, which will not give an overly tough challenge, will feel right at home with Ghostbusters—it’s not too hard and not too easy.

+ 4 player local co-op is fun with friends and family

– Levels can be quite lengthy resulting in loss of interest

– Single level of difficulty that cannot be changed

Get Ghostbusters for Xbox One

Get Ghostbusters for PlayStation 4