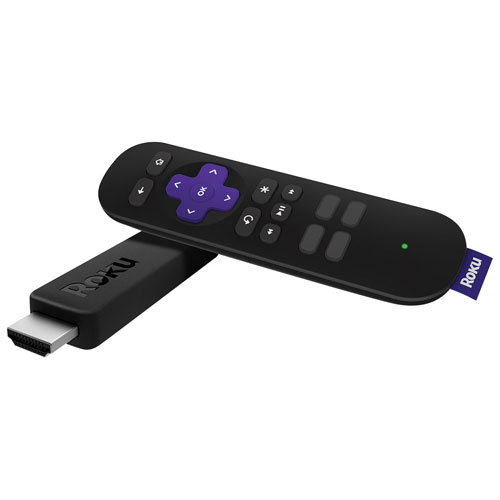 TV streaming fans, rejoice! Roku, makers of the popular and easy to use Streaming Stick, have released their first new version since the original stick debuted in 2014. While there are some small aesthetic differences, the biggest changes are under the hood.

The “all-new 2016 Roku Streaming Stick” as it’s being called is slimmer, and it’s now black instead of the signature purple, but for the most part it works exactly the same. Where you’ll notice the most significant upgrade is in the streaming power.

The new Roku Streaming Stick comes nicely packaged and one of the other significant things you’ll find when you open the box is the brand-new remote (batteries included!) which now features some quick-launch buttons for popular channels like Netflix. For a full unboxing and introduction to the stick, watch my video, below.

Getting Started/Set Up
The first thing you’ll need to do to get your Streaming Stick going is pair the new remote so you can use it to set up your device.

Pop in the batteries then push the button on the inside of the battery compartment for three seconds to pair the remote to your streaming stick. The light on the front of the remote should slowly flash green, indicating pairing is underway, and once it stops flashing you’re ready to go.

Next, set your language, then connect your Wi-Fi network. Inputting names and passwords is very easy using the remote control to navigate the menus. Once that’s complete your device will check for updated software then reboot itself.

Next thing you need to do is activate your Roku from a PC, phone, or tablet. Use the link it shows you on screen, (Roku.com/link) then enter the code provided on screen. Once that’s done it’s time to log into (or set up) your Roku account. Then, download and enable the app, so you can have both a second remote and access to voice search and a keyboard.

For the most part, set up is automatic, but for anyone who already has a Roku Streaming Stick, you may need to actively select which stick you are currently going to be using.

I had trouble for a couple minutes getting the app to recognize the new stick. It seemed to be able to ‘see’ it as it was ghosted out on the screen, but it would not connect. After a few minutes, that problem was easily solved by pulling the plug on the device and then plugging it back in. Instantly the new streaming stick was visible and connected. Once you’re logged in, all your settings and favourite channels and shows are the same.

If you had a previous streaming stick you’ll need to log into your accounts for all the various channels you subscribe to, such as Netflix.

It’s also good to know you can toggle the app between sticks if you have more than one in the house; a handy feature for multiple TVs.

Need help getting set up with your Roku Streaming Stick? Read my blog and watch the video HERE.

Do you have the need for Speed?
The big advancement with the new Streaming Stick is the power. The 2016 version has eight times the processing power of the 2014 Streaming Stick, which Roku claims will get menus to respond faster, and should help programs cue up quicker. Thing is, I found the original stick worked just fine for me. We rarely have issues with internet speed in my house, so watching TV on the original Roku has been trouble-free.

So, in testing out the new stick, I did a couple things to test the speed of the new device; I loaded a TV show in each stick, and timed how long it took each program to play on each device.

It was pretty much the same for other shows I tested. As you can see, the new Roku stick is consistently faster at loading content by a full second or two.

Where I really noticed the difference was in the menu navigation. When pushing buttons on the remote, or navigating the app, there was a lag between one and three seconds on the original Roku, before the screen would change or a program would play. Just enough to make me think I needed to press the button again, which would inevitably confuse the remote. Funny that I had gotten used to that lag on the original stick, but after an hour with the new one it was a hardship!

With that said, it’s obvious in a head-to-head comparison the new stick is noticeably faster. But would the average consumer notice this speed hike? Probably not, and particularly not if they’re new to streaming. The old stick is fast, the new stick is just faster. With my current stick, that’s not going to make me rush out and get the new version, but if I were recommending a Roku stick to a friend, (and I would) I’d definitely suggest they just get the new 2016 version, since for the price you get a much stronger device that’ll last you well into the future. 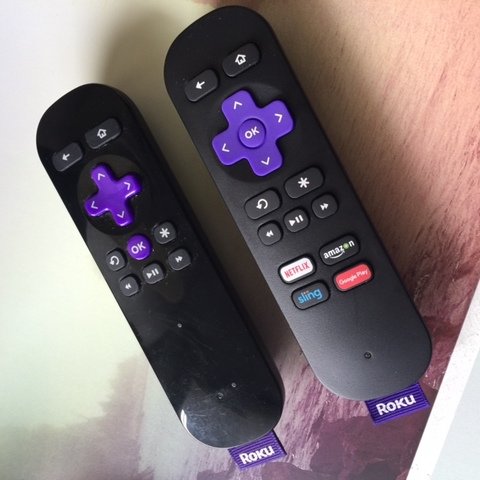 2 Remote Control Options
There are two options when it comes to controlling your Roku Streaming Stick. The first is to use the remote control which is included in the package. It has all the buttons and functions you will need to use your streaming device. As a bonus, it also contains four quick keys which can navigate you with one touch to channels like Netflix or to your Slingbox.

I have to say, the Netflix button is the handiest of all. When the stick powers up, it’s easy to go straight there; particularly because Netflix is my most watched channel on the streaming stick.

The other option for remote control is to download the Roku app and use your smart phone to control the television. One of the advantages to using the app is that you can use voice search. It works by pressing the search button, selecting the microphone/voice option, then speaking the name of the TV show or movie you’re looking for. (Voice search will work, by the way on either the original or new Roku; it’s a software thing, not hardware).

How to use voice search properly
The app will then call up relevant search results. I tested this by searching for several shows, from Walking Dead, to Forensic Files, Breaking Bad and Deadpool. At first it wasn’t finding any of them. Then the app suggested I use fewer words in my search. Instead of asking Roku, “Search for The Walking Dead”, I just said “Walking Dead”, and boom. By just using the titles, it found every single program I used voice search for instantly. 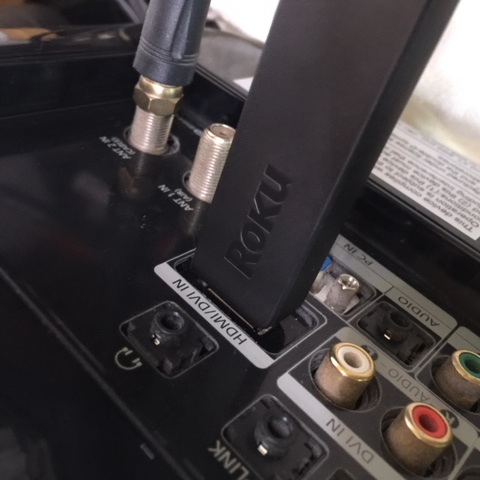 If there’s one annoyance, it’s that when using the app on a smartphone it sometimes wants to kick you out of the Roku search function and into the Netflix app for playback, which adds an extra step to watch content. Hopefully that’s a software/search bug that can be adjusted in future upgrades.
Overall: Roku Streaming Stick

I’ve been a big Roku fan, and can now say I still am. I’ve had a Streaming Stick since they launched in 2014, and I’ve never had a single issue with it. It’s worked perfectly, been responsive and given me hours of enjoyment. I’ve also tested out TVs with Roku streaming power built in and they too have been easy to use.

Bottom line, yes the 2016 Roku Streaming Stick is noticeably faster, but only if you’re comparing it head-to-head with the original; most users won’t find the upgrade worth it if they already have the original. However if you’re in the market for a new stick, or know someone who is,  or you need that faster processor because your content is constantly getting hung up, then this device is perfect.

Get the all new 2016 Roku Streaming Stick at Best Buy