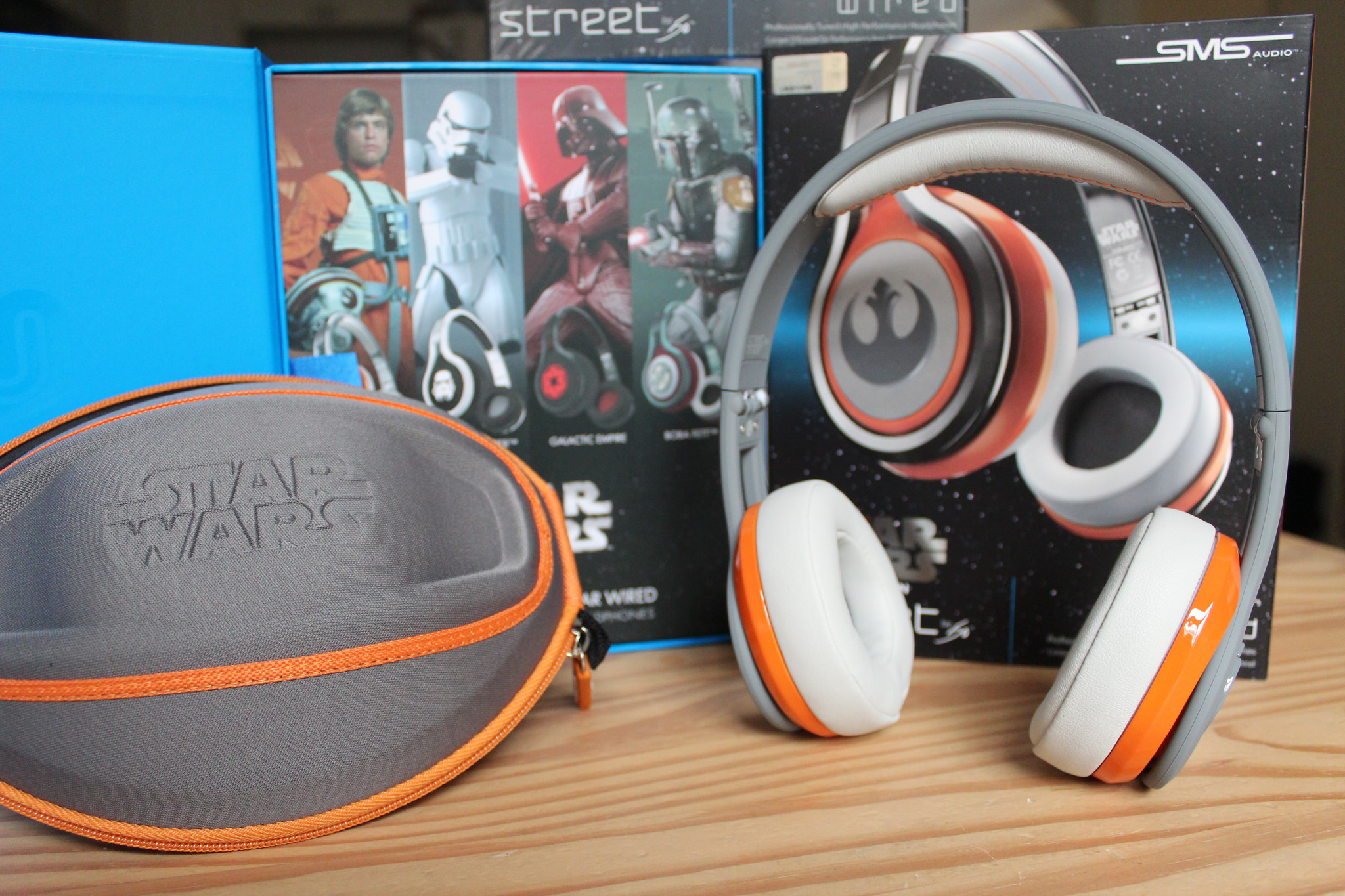 When Best Buy notified me that I’d be reviewing some Star Wars Headphones, I thought “Cool, I’ve seen these before,” thinking back to some very basic stormtrooper headphones I saw in stores a few months back. Little did I know that there’s a brand new line of Star Wars Headphones courtesy of SMS Audio’s STREET by 50, and these are much much nicer.

This is the first series in this particular line. The Headphones come in 4 styles:

We’re going to take a closer look at the Rebel Alliance and Boba Fett sets in this review. These headphones are getting the SMS treatment, which means you can expect a really lightweight and comfortable product. SMS Headphones have typically been amongst the best looking and most comfortable I’ve reviewed at my time here at Best Buy, and really, these were no different. 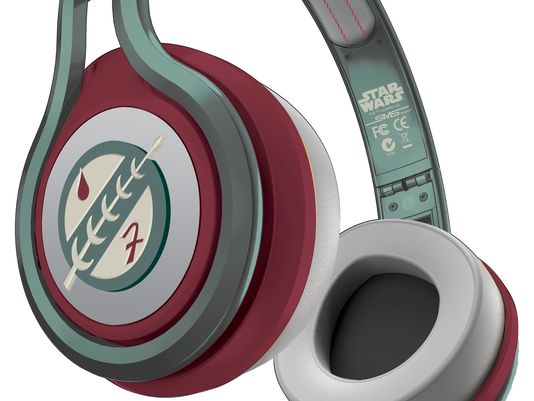 The first thing you’ll notice when you pick these headphones up are how light they are. Unlike some of the other headphones in this price range, there isn’t a lot of heavy metal components to it. In fact, you might be surprised with the amount of plastic and the plastic look that go with these headphones with the only visible metal being the flexible sliding hinges and the headband’s end pieces. This is a big benefit to these headphones actually – they weigh virtually nothing at all as a result. In all cases, the headband is shatterproof. The hinges are a bit stiff to start, but will loosen with use. They lock and unlock in place well, however, so it’s not a worry.

Included in each package are the headphones themselves, a matching color carrying case and cleaning cloth, instructions, decals, and a couple collectibles – a first edition poster corresponding to which headphone set you’ve purchased and an ad for the other pieces. 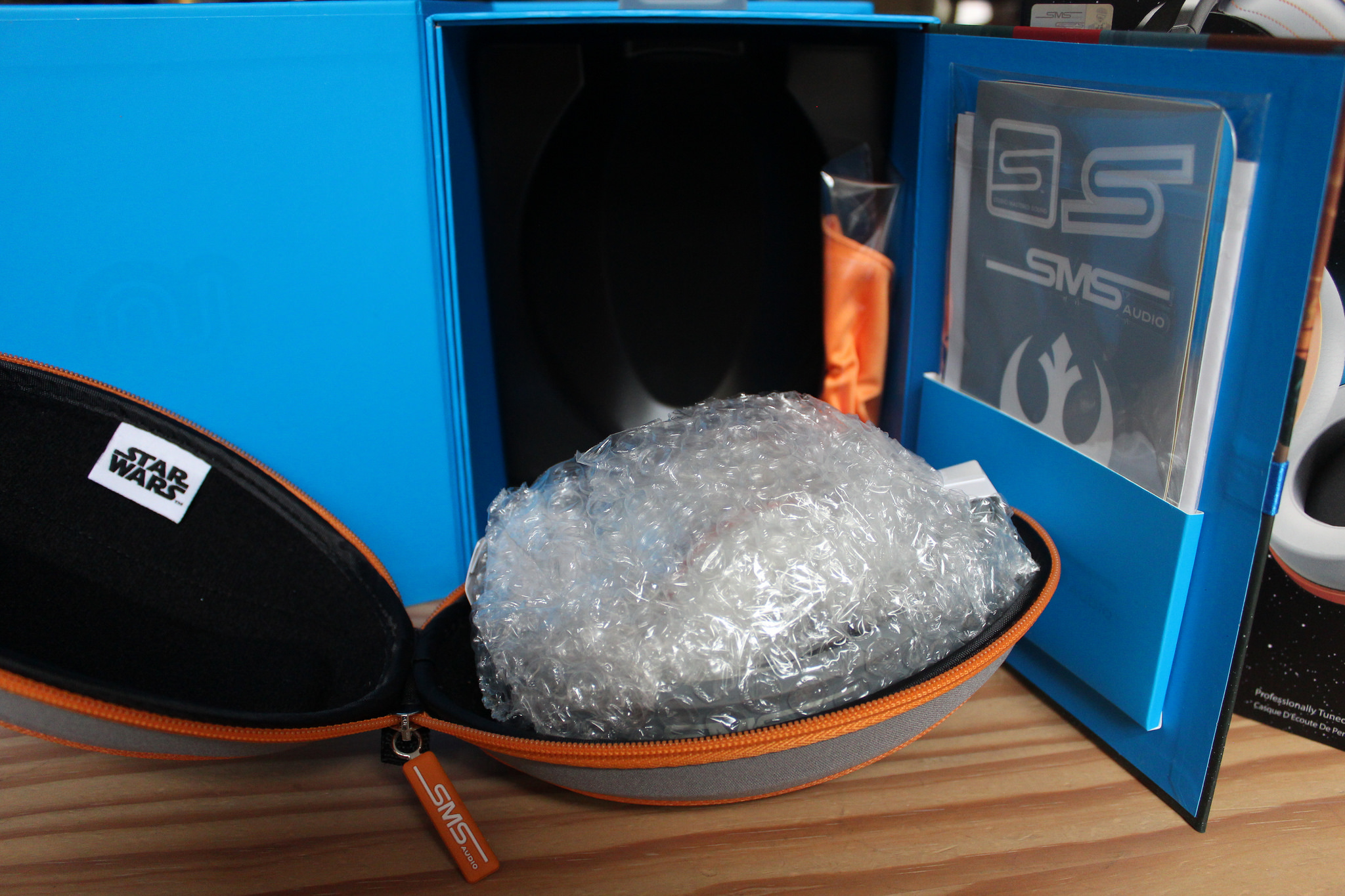 The headphones themselves, as expected are near the top of the industry for sheer comfort and practicality. All of the headphones have well placed and large cushioning in the right places. The headrest has a cushion to softly rest on the top of your head, while the ear cups (dubbed OVALFIT) are capped off soft leather and despite being what could be a hot and coarse material, is perfectly breathable and doesn’t overheat your ears, no matter how long you’re listening. The cups themselves are made of memory foam, meaning that they’ll conform to your head and ear’s shape instead of just sitting awkwardly. This has always been one of my pet peeves with headphones in general – they can claim to be whatever they are, but if they don’t sit on your head and ears comfortably, what’s the point? I used to work a job where I could sit and listen to music at my desk all day while writing, and I look at these as the type of headphones I could wear all day (I’d previously have to cut it after an hour or two because my ears were so uncomfortable.) The headphones themselves are sound isolating, and block out regular ambient noise from the outside world. 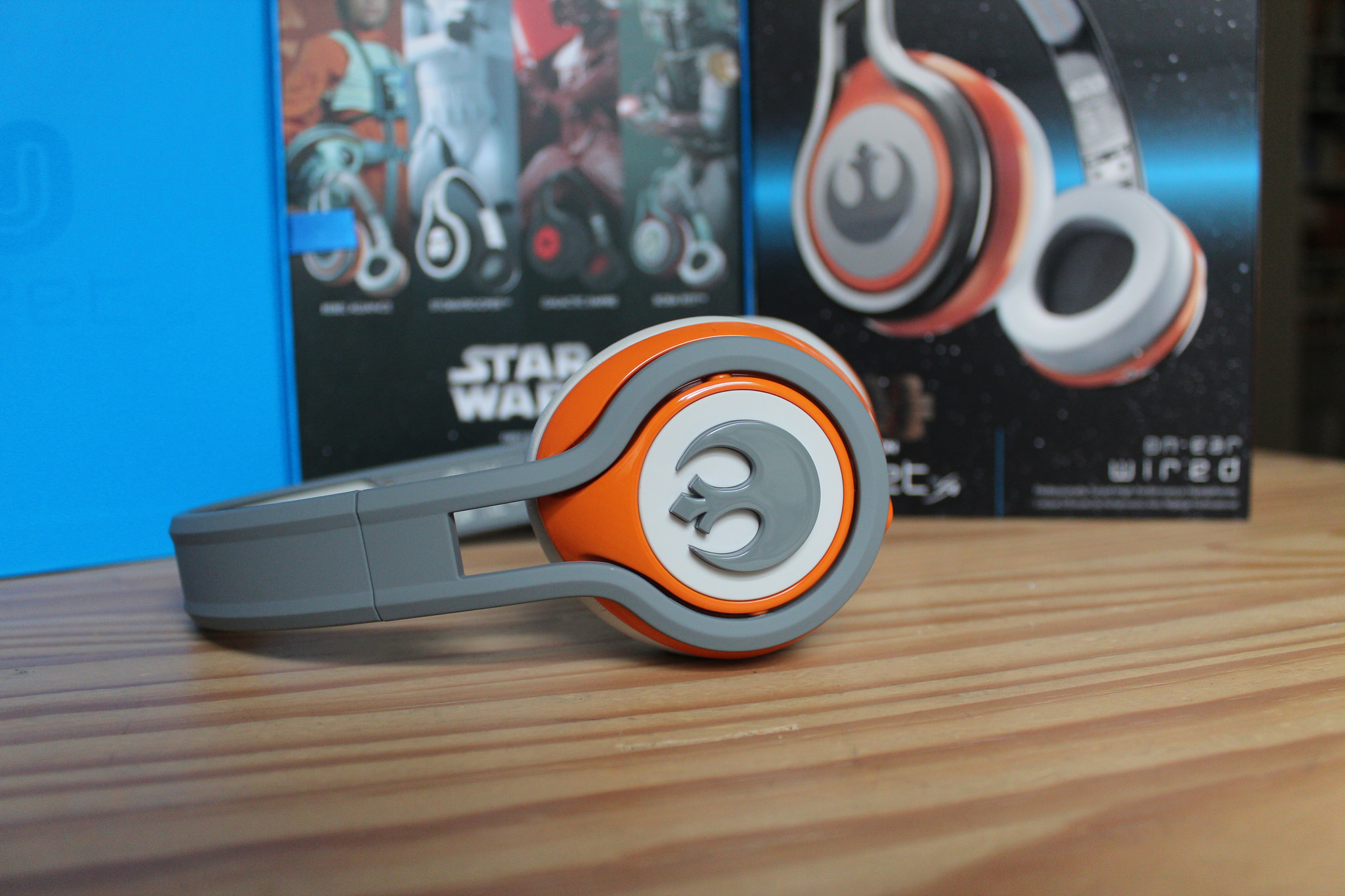 If this is something you’ll be using with your smartphone as well, there’s a mic remote built into the cord and an inline mic. The cord itself is just as well planned as the rest of the headset – firm and tangle-free, and there’s simple controls for you to be able to take calls on the headphones on most popular smartphones. 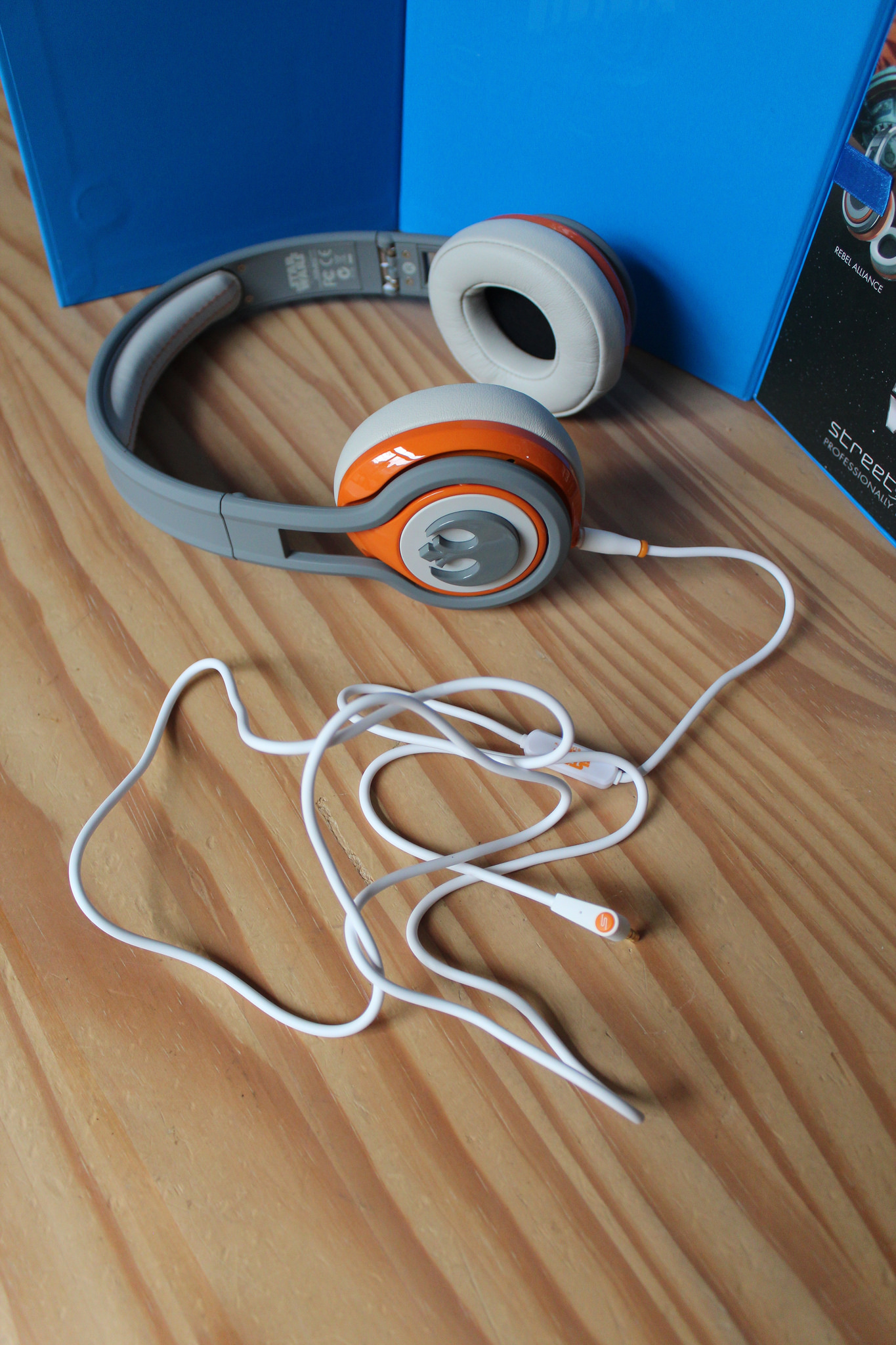 When opening and putting the two of them side by side, I admit that I was much more partial to the Rebel Alliance set (though I’m sure I’d have gotten a kick out of the Galactic Empire ones too.) Both look really slick and really professionally done, but with just aesthetics in mind, the Alliance wins out. The colors really stick out on both, and the ear can covers have a great moulded raised dynamic, as opposed to a paint job or decals. Best of all, they kept the overall designs nice and simple. There aren’t a lot of bells and whistles, or shiny or metallic piping or leafing that will flake or rub off over time.

As for the sound, they’re obviously the same headset but with a different design. Both feature 40mm drivers built in, and music sounds great on these. All forms of music come out with bass rich, vibrant, booming sound, and I think anybody listening in will be impressed. The memory foam feel of the ear cups and the headrest make it so that the headphones stay in place no matter how much you’re moving or swaying along with your favorite music.

SMS Audio’s normally known for creating clean and consistent sound with its headphones, and I don’t think you’ll be disappointed. This is no different than any other set of theirs. The sound is crisp and balanced, and even the worst quality music you may have (like, say, old unmastered classic rock that usually features legions of hiss and sounds like you taped it off an AM Radio with a handheld tape recorder) sound great. I’m always a fan of SMS’ offerings as a result, and my impressions haven’t changed after spending a few days with these.

I will say that there’s one thing that surprised me though as negative, and that’s just how out and out stiff the headrest is for adjusting size on your head. If I had overadjusted it, I would literally have to pull it off my head each time to adjust by hand. It didn’t seem to like the idea of adjusting on the fly. I don’t know if this was done on purpose, or if it was unintentional. 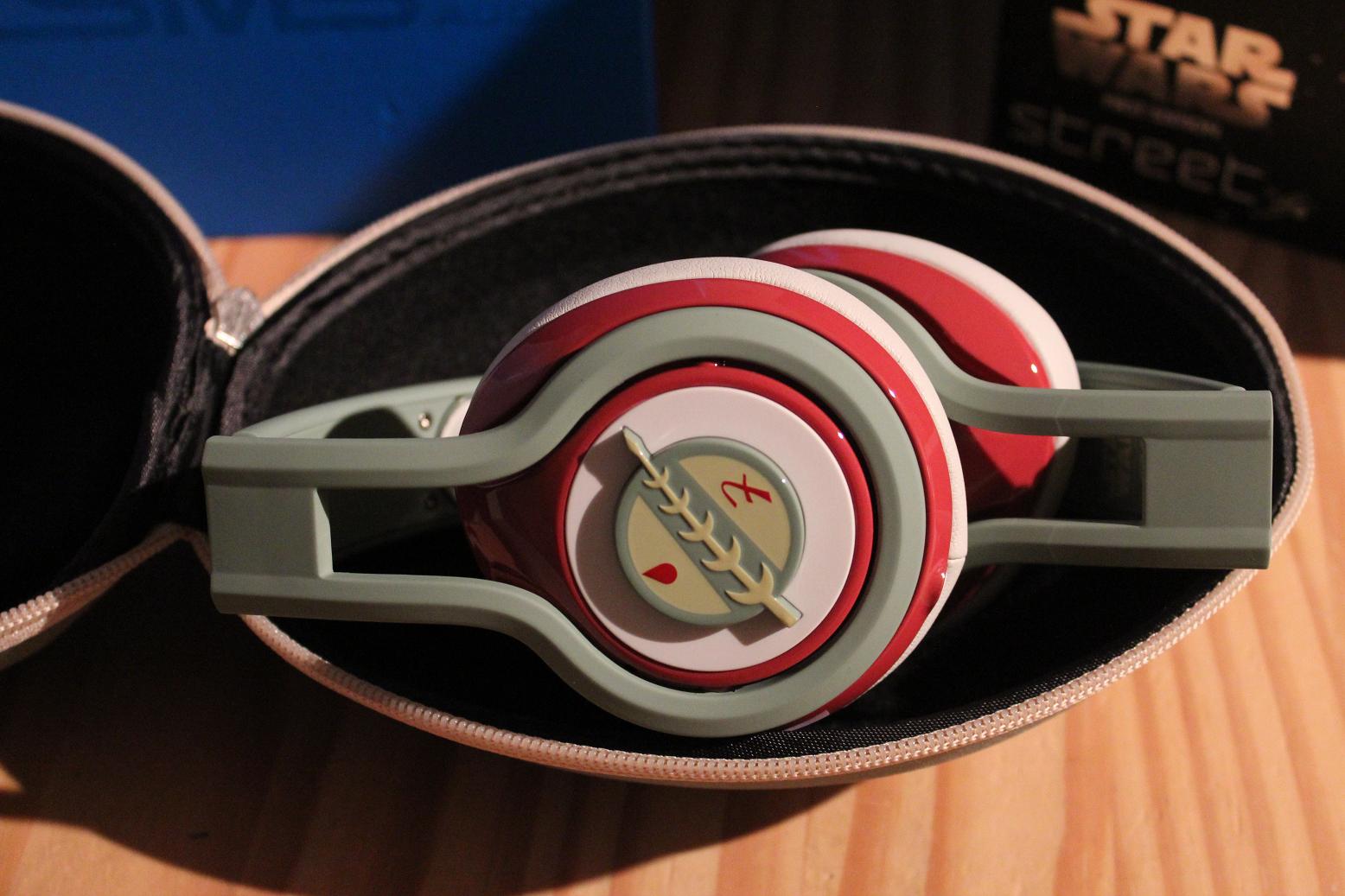 I admit
(and this is silly,) I’m a bit disappointed in the carrying cases as well. They come embossed with the Star Wars logo, and are the traditional SMS pod style case, but I think they missed a bit of an opportunity here to dress them up with a bit more Star Wars gusto. I’m surprise they didn’t dress up the Rebel Alliance’s headphones in a Tattooine carrying case (since Luke Skywalker’s the pictured hero on these, for example.) I haven’t seen the Stormtrooper case, but imagine it’s probably not in a Death Star.

These are great otherwise, and just the first of what I can imagine might be a few different planned sets. These four are dubbed the “First Edition” so surely, and are pretty limited in nature, so they probably won’t last on the market long before SMS decides on whether they want to go with other sets.

The full range of SMS Street by 50 Star Wars branded headphones are available now in limited quantities online at BestBuy.ca