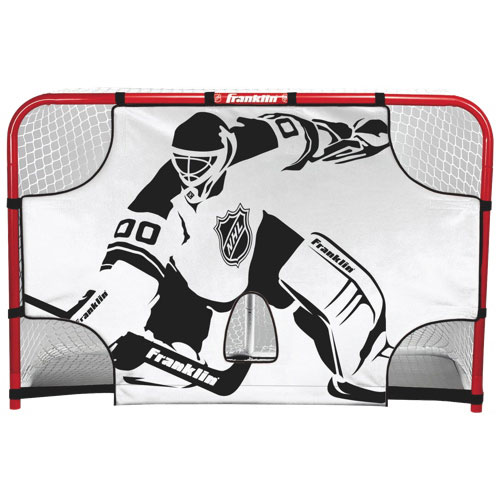 As I sit here shivering, I know that winter’s just around the corner. Temperatures nationwide have already dropped below freezing and the frost on the ground looks more like sheets of ice here in Vancouver. Still, this upcoming spring and summer is the year that my daughter’s going to be old enough to run around with a stick and play street hockey. I’ve been prepping her with a toy golf and hockey set but I don’t have any of the other hardware required.

While it’s a bit chilly now, you may want to think about tucking some street hockey equipment under the tree for your little ones too. Franklin is one of the longest running and most trusted equipment makers for street hockey in Canada and you can find a healthy selection of things for sale now at Best Buy.

Before I get started, keep in mind that Franklin’s products aren’t safe for the ice. Franklin got out of making ice hockey equipment for kids around 10 years ago and no matter how sturdy or safe it looks, it’s not certified by the CSA to be taken out on the ice. 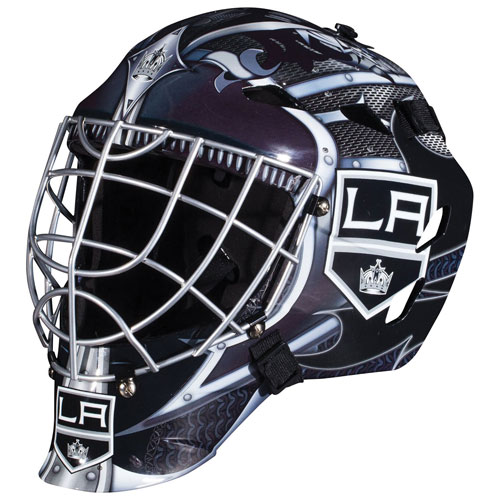 I started with goalie masks for a reason: When I was a kid, there was always that one kid in the neighbourhood that had pads and wanted to play goal. The problem was that nobody ever seemed to have a mask. Hockey balls, sticks, pads and sometimes nets were in abundance but no masks. Given that every child in the 90s was trying to be the next Al McInnis and fire a 100 MPH slapshot, it definitely didn’t do your friend or neighbour a favor when you cocked your stick. I dented garage doors, broke a headlight and even fired a slapshot so high that I scored on my basketball hoop. If professionals don’t always have the accuracy to miss a goalie’s head, could you expect little Billy next door to keep shooting low or on net?

If your son or daughter wants to be the neighbourhood goalie, be the nice parent who hooks them up with a mask! Franklin Masks come in a variety of different color schemes and grow with them for a few years. It’s highly recommended to prevent bloody lips, bruised cheekbones and more. They’re also available paying homage to a variety of different NHL teams, so they can wear their favourite team’s colours proudly. 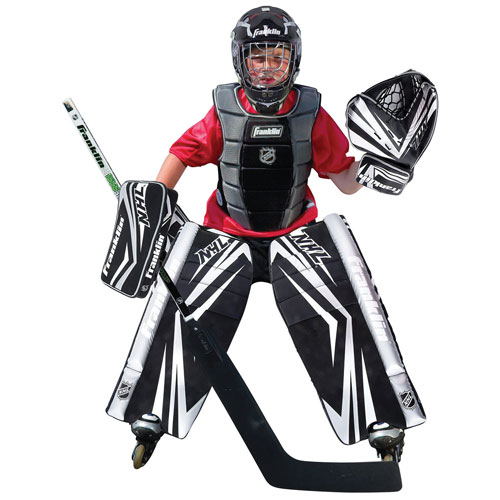 If the lack of goalie mask also reminded you that you don’t have the net or the pads to go with it, Franklin has you covered for that too with sets of street hockey goalie pads. One of the most annoying things I found when I was a street hockey playing kid was that you had to piece all your street hockey kits together. You’d have to buy the leg pads and then the blocker and trapper separately. I don’t know why it had to be so complicated. Thankfully, kids 20 years after I grew up will never have to experience the injustice of bruised hands or knees because they were missing half the equipment. Let Franklin take the guesswork out of the equation and pick up a full set right away. Chest protectors are optional, but you can still stuff yourself with a pillow or old magazines and then tuck your shirt in like we used to. Kids still need to have some ingenuity right?

As for street hockey nets, they make some really cool and sturdy ones now. My childhood hockey net was so rickety that it fell apart like a chair on the set of a Western movie fight scene. The nets nowadays interlock much better and come in much more variable sizes, ranging all the way up to near NHL-size.

My personal favourite is this indoor one with a motion activated light, though judging by its height (approx. 36 inches high,) it’s really meant for the younger players. 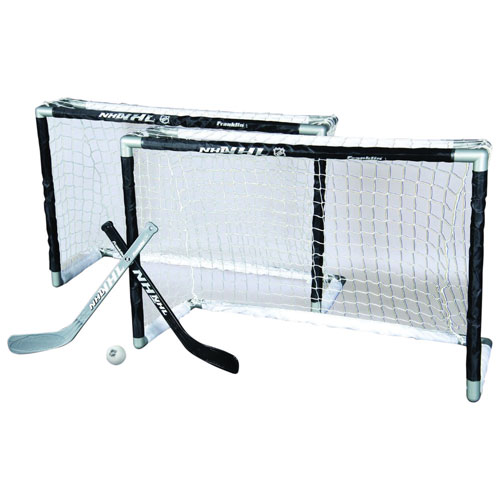 It almost comes second nature to all of us Canadian kids growing up that we want to play hockey all of the time. A little snow never stopped my cousins and I. Somebody always had an indoor hockey game plan, whether it was a tennis ball in the hallway or a mini-hockey set in the garage or basement. For all those post-game itches for hockey or snow days inside, you can keep the games rolling with these mini hockey sets, some of which are available in the colours of your favourite NHL team. You’ll get a couple mini sticks, a net and a ball. I’ve got one of these at home for my daughter and everything is soft. The ball is squishy and the sticks are coated in a thick layer of foam to prevent things from breaking. Still, this is Canadian hockey we’re talking about. Hide the breakables before Hockey Night in Canada begins!

These is the tip of the iceberg. Here’s the full category of Franklin’s hockey selection. You’ll see much more like team hockey sets, passers and more!

Whether your team out in Montreal is headed for the right time of long season, or the team out here in Vancouver is headed for the wrong kind, we’re all bound together by our enjoyment of hockey coast to coast. Hopefully I’ve provided you with a few ideas to keep your budding hockey superstar happy for months and years to come!