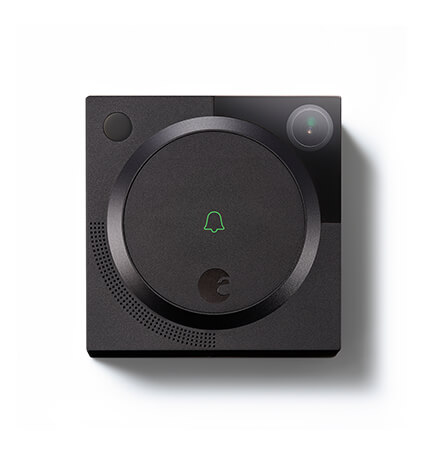 Who hasn’t wondered who was at your front door when your doorbell was ringing. Not ever visitor is expected, and although some of us have security cameras that will cover our yard, those cameras won’t show you who is ringing your doorbell.

With the August Doorbell Camera you can see who is ringing your doorbell even when you aren’t home, and what’s even better, you get a live video and audio stream so you can talk to that person via the August app to see what it is that they want.

I find this type of technology pretty amazing. I’ve always been someone who has an alarm system in my houses, and I knew when I moved to acreage I knew I would definitely be installing another. With no neighbors nearby and a constant stream of contractors, delivery people, and break ins around here, I wanted to make be sure my family was safe with door and window sensors.

But as I discovered last week when I installed the August Smart Door Lock and the August Smart Keypad there is security that gives you a feeling that’s goes beyond safe. Having a log of who has come in and out of my house, being able to pop the door open from anywhere, and being able to give people a key code to enter has given me peace of mind I can’t say I’ve ever achieved with a simple security system.

Now that I’ve added the August Doorbell Camera to my system, I feel as though I live in a little farmhouse fortress. It’s a good feeling, let me tell you.

Here’s my take on installing and using the August Doorbell Camera and how it works with the August Home Kit-enabled Smart Lock and Smart Keypad. 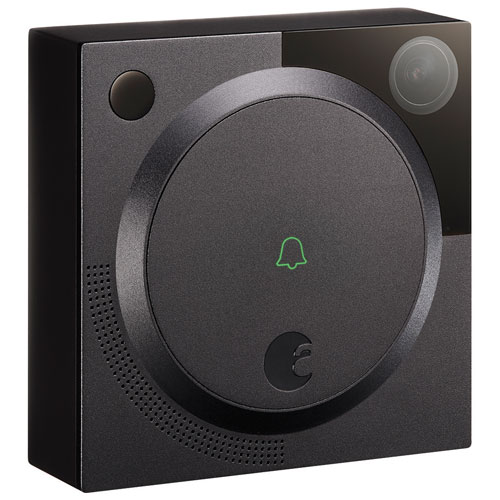 The August Doorbell Camera is a small disc shaped camera with a sensor plate. It has the same esthetic as the August Smart Lock; round with the indicator light in the middle. Although it’s lightweight and made of plastic, it feels durable and will able to stand up to temperatures from -17º to 45ºC.

Features on the August Doorbell Camera 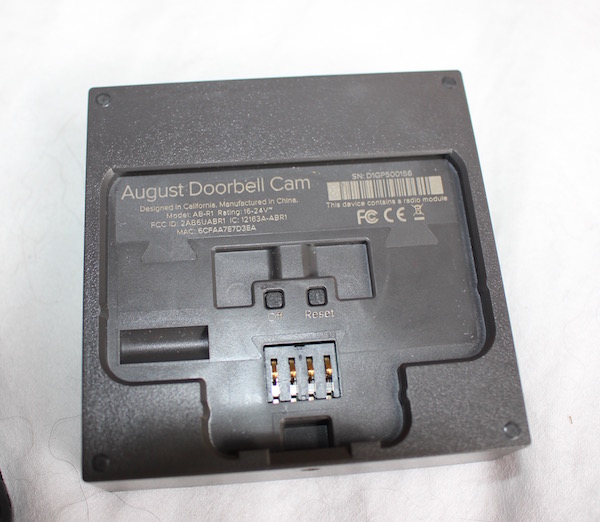 Both the August Smart Lock and the August Smart Keypad are battery operated, so when it was time for me to install the August Doorbell Camera, I assumed it was battery operated too. Not so; the doorbell camera replaces your doorbell and mounts into your existing wiring. You don’t need to be an electrician to do it, knowing how to hard-wire a light fixture will probably be enough of a reference point for you.

That being said, some of us don’t have hardwired doorbells. There was no doorbell in this house when we bought it, and when we replaced the existing wiring in the house we didn’t really consider hard-wiring one. I knew that the doorbells you can buy in home stores are now wireless, so if I wanted one I could just pop one up no problem.

Because the August Doorbell Camera was something I definitely wanted on my front door, I went out and picked up a wired doorbell set. Our house is not quite finished and it was simple to plug it into power and set up a doorbell. As you’ll be able to see in the video below, we have to finish the exterior before we find a permanent place for our doorbell so I’ve demonstrated with visible wiring.

Beyond having to install a doorbell yourself like I did, installing the August Doorbell Camera is really fairly simple. Turn off the power, remove the existing doorbell, and connect the August Doorbell Cam wires to the exiting two wires via the included blue connectors. This is an important step, because if the two connectors aren’t properly connecting, your doorbell cam won’t get enough power and it won’t work.

You have to crimp the two connectors to your existing wires to ensure a connection, then mount the base plate with a drill. The August Doorbell Camera comes with two base plates: flat and a wedge. You can use the wedge to angle the doorbell camera toward your door, and that way if someone rings the bell you can see them right away. 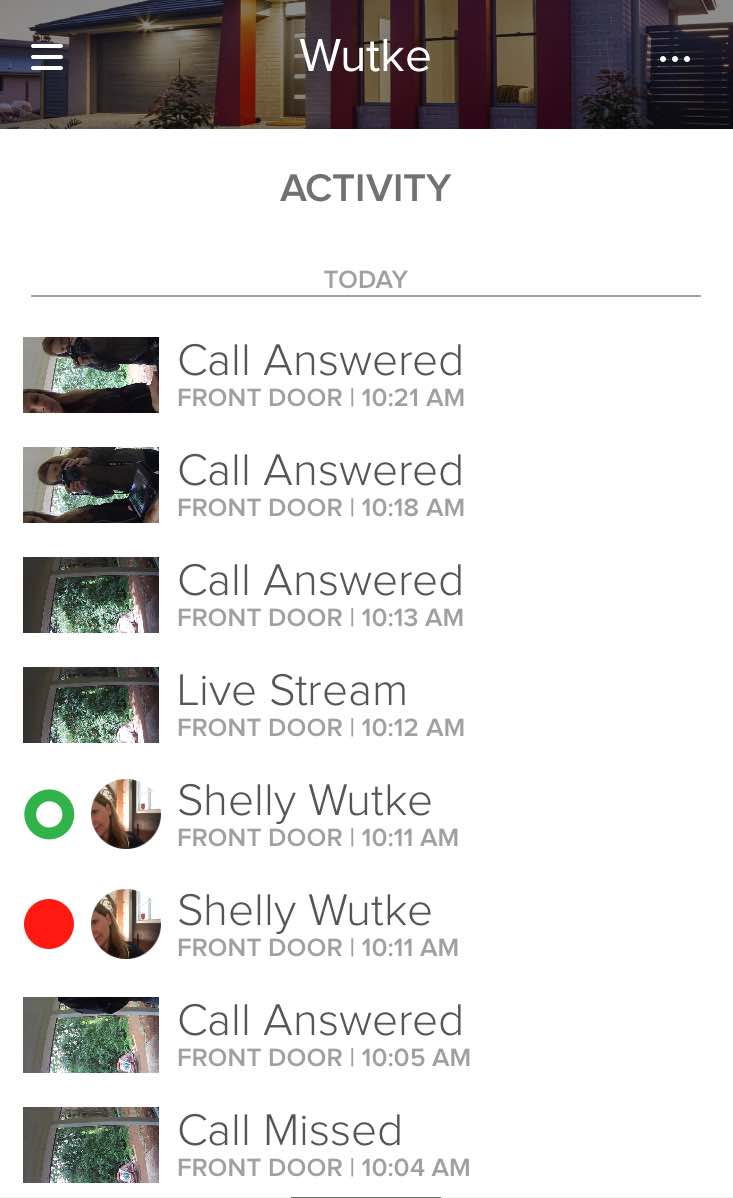 We ran into a few small problems when installing the camera and they knowing them might help you when you’re installing. First, the screw that connects the doorbell camera to the mounting plate must be all the way in. You have to use a hex key to do so, and you might be turning a while and wondering if it’s in the proper spot.

The reason why this screw is important is that once your doorbell camera is set up and getting power, you have to wait half hour for it to charge. Then you remove the camera and take it to your router to sync it. This is important. I took my camera off to sync it before it was fully charged and it wouldn’t sync with my home network, so I took it back to the doorbell, used the hex key again to reinsert the screw, and tried again in ½ hour.

One I confirmed that my Doorbell Camera was fully charged and had a green steady LED light, I thought I’d try to sync it from where I was at the front door. My router is about 10 feet away from the door, and it synced in seconds without my having to remove the doorbell camera again. If you’re router is nearby, you might just want to leave the doorbell camera outside, because I feel as though that one tiny screw was the most difficult part of the install process.

Everything else about installing was simple, and if you ever have trouble with your doorbell camera and you want to do a reset, just take it off and hit the reset button on the back of the camera. You can also turn it off via the back of the camera, just in case you don’t want it running for a period of time.

Just a note: you can install the doorbell camera any way you’d like. I turned mine on its side to get a large scope of the side porch as that’s where people tend to show up. I also prefer landscape view when watching video, but you can put yours in portrait or have it flat to show straight out to the street. 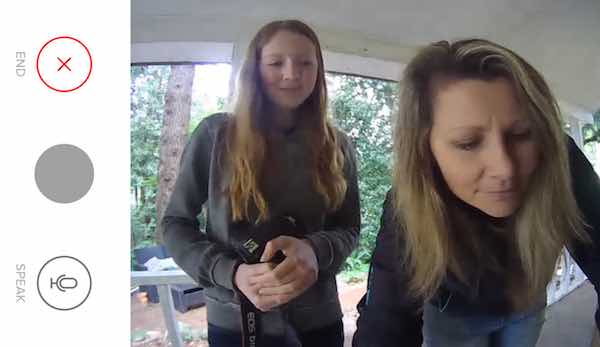 Some things are worth installing a doorbell for, and the August Doorbell Camera is the only reason I would want one here. Once it was up and running we all took turns pushing the doorbell, and it works like a charm.

You receive a notification when someone rings your doorbell, and when tapped that notification opens up the August app and brings you to the screen with your doorbell camera. It’s a wide-angle lens so you can see what’s going on all around your front door, and that’s a nice feature considering that it’s a security device. You don’t want to let someone in when someone else is lurking in the bushes.

The August Doorbell Camera works with the August Smart Lock perfectly, and it’s an amazing home security set that gives you both eyes and ears on your front door. If someone shows up at your front door and rings the doorbell, you can open the app and see who it is. You can talk to them via the two-way audio, and the feed is crystal clear.

If you decide you want to let them in for whatever reason, you can hit the door lock button and let them in. I’m not sure why, but I experienced a bit of a glitch when attempting to open the door via the Doorbell Camera. My August Smart Lock was appearing on my app screen but when I tried to touch it to open while in the Doorbell Cam, it wouldn’t open right away. There was about a 30 second delay before it did open.

Other than that minor issue, the entire system was seamless and easy to use.Take a look at the video to see how we installed and used the August Doorbell Camera.

Updates to the August Doorbell Camera

August has just come out with some amazing updates for their doorbell camera. There’s a new Hindsight feature now available that records motion at your door for a few seconds prior to an incident. That eliminates the issue of missing out on what the motion was that triggered the recording in the first place.

There’s also a free 24 hour content plan, giving you access to all of your videos within a 24 hour period for free. If you’d like to save them beyond that 24 hour period, you only need to pay $5 per month for 30 days of video history.

When I un-boxed the August Doorbell Camera I was wondering why I would want one, but now I can’t imagine why anyone with a front door and a doorbell wouldn’t. It eliminates the entire peep hole experience, and if someone knocks on your door while you’re away, you can see exactly who it is and what they might want.

I would have absolutely loved this Doorbell Camera when I lived on a busy residential street. Sometimes the doorbell would ring after dark and it would be someone trying to sell us something. With the Doorbell Camera I could have checked who it was and even talked to them without leaving my living room. Because it’s able to stream in low light, you can still see whomever is there in the dark too.

The entire August Home Kit-enabled system was well worth the small amount of time it took to install, and now that I have everything up and running, I’m a lot more relaxed about who is coming to my door when I’m home and when I’m not.

This system isn’t just about convenience, it’s about peace of mind. I’ve had a break in on my property and I like knowing that if someone was at my door, I definitely don’t have to open it. If I want to open it, I can without even being there.

Take a look at the August Doorbell Camera and the other Home Kit-enabled August devices available now on Bestbuy.ca.