Think smart locks are only for detached homeowners? Not a bit of it! Join me today as I review the August Wi-Fi Smart Lock Pro + Connect from the perspective of someone living in an apartment. I don’t really even have an outside door, but that doesn’t mean that I don’t have a door at all. My door, like most people that live in an apartment, opens to another interior space. For most, that’s going to be a hallway; for me, it’s a garage. Either way, I need that door to lock to keep the inhabitants in and the outsiders out. If you’ve been thinking of adding a smart lock to your apartment living setup, today’s review is just for you. Read on!

The August Smart Lock Pro + Connect is chock full of useful features. These include the ability to easily lock and unlock your door via your smart phone and Bluetooth (as well as both Wi-Fi and Z-Wave Plus), complete control over who enters your home (as in you can give family, friends, housekeepers, etc. easy keyless access), and voice control via both the Google Assistant and Siri (if you have them). It also happens to work both with Apple HomeKit (hence the Siri control, but also iPhone, iPad, and even iPod Touch) and be Nest friendly, so you’re good to go if you use either of these popular smart home ecosystems.

There’s also the option to just keep on using your old-fashioned key as this smart lock replaces the interior portion of your lock only (the thumb turn assembly). This means that if your smart phone occasionally dies while you’re out, you’ll still be able to unlock the door when you get home (just keep your house key on your vehicle’s key ring and you’ll be fine). Of course, you can always just have the August lock itself automatically when you leave the house (provided your phone doesn’t die on you). This feature is called DoorSense Technology, and it locks the door automatically behind you, so you don’t even have to think about it.

The August Smart Lock Pro + Connect is also very quick and easy to install, and you can do the entire installation yourself in just minutes (without the help of any costly professionals). More on that below.

I got the chance to try this lock out recently, and I was initially struck by just how little there was in the box. In the image above, you can see the lock portion of the kit in the lower righthand corner, and just above that is the Connect device, which simply plugs into any wall outlet and gives you worldwide access to your lock via Wi-Fi and the Internet.

There are a few other bits and pieces that also come in the kit, but most of them are hardly worth mentioning. For instance, one is merely a piece of masking tape that you’ll use to keep the portion of your lock on the outside of your door from falling off while you install the inner section (see photo below). Note: For many living in apartments or condos, changing your exterior door lock is a big no no due to aesthetic uniformity rules and/or other bureaucracy, but this is not a problem with the August Smart Lock Pro, which leaves the external portion of your lock exactly as is.

Another (more important piece) is a simple metal plate that screws onto the lock using the same screws you will have removed from the lock when taking off the old thumb turn. This piece gives the August Smart Lock Pro something to attach onto and holds the outer portion of the lock firmly in place as well. The only really important pieces other than that are 3 tiny adaptors (shown below) that work with various types of door locks. You will only need to use one of these—whichever one fits your lock.

The August App itself actually walks you all the way through the 13 step installation process (it sounds like a lot of steps, but at least half of them are less than nothing). During the install, you’ll have the opportunity to choose the manufacturer of your door’s lock, which theoretically should help you to choose the correct adaptor (the adaptor is what connects the existing lock’s internal tumblers to the August Smart Lock Pro).

Sadly for me, the company that made my lock (Beaver—the lock is shown below) did not make the list, so I had to figure out which adaptor to use myself. Luckily, this was as easy as eyeballing my lock and the 3 included adaptors to see which one had the proper shape to fit. Evidently even locks not on August’s list of existing manufacturers still use one of the 3 shapes that are provided in the kit.

I’ll leave most of the details of the installation for the video portion of this review (since they’re easier to show than to explain). Suffice to say, utterly zero expertise of any kind is required to install this lock. Anyone can do it!

In just about 10 minutes I had the entire thing up and running (including the Connect portion of the kit—shown below, which simply plugs into any wall outlet and is then paired to your home’s Wi-Fi network), and that was with trying to film and photograph the whole process. The Connect linked to my home Wi-Fi network in just seconds, and I’ve been using the lock with my Samsung phone ever since. Note that the app is both Android and iOS compatible.

As for using the August Smart Lock Pro + Connect, I have only experienced one slight issue thus far. Whenever I press the large icon to lock or unlock my door, no matter where I may be, it always works perfectly. The only thing that doesn’t work perfectly is the feature that uses my phone’s location services to know when I am at home or not and lock the door accordingly. I believe that this issue is, however, more a problem with my phone’s location services than with the Smart Lock Pro itself.

I have noticed on various occasions in the past that my phone will sometimes think that I am in one location when I am in fact in another. I have witnessed it thinking I was at home when I was all the way across town, and vice versa, so obviously my phone is just plain crazy. For this reason, I had to disable the feature in question as it would sometimes unlock my locked door when I was miles away from home—very annoying to say the least, but I certainly don’t blame it on the lock!

Please take a minute or two to check out my brief video overview of the August Smart Lock Pro + Connect. In it, I show up close footage of everything that comes in the box as well as most of the very easy installation process:

I was most impressed with the August Smart Lock Pro + Connect right from the get go. Not only was the installation quick and simple, but practically anybody can do it and feel like an absolute pro in just minutes. Once installed, it connected to my phone almost instantly, and it always locked or unlocked when I tapped the command icon. The only issue I had was the location services one (regarding my Samsung phone) discussed above. That issue, I have concluded, was more a problem with my phone than the lock. Aside from that, I have enjoyed the conveniences of this lock considerably, and I plan to keep on enjoying it for as long as we live in this apartment.

If you live in an apartment—or even if you don’t, this smart lock can certainly work for you. Find yours now in the smart home section of BestBuy.ca. 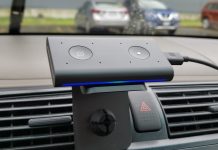 Amazon Echo Auto with hands-free Alexa in the car review 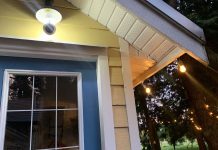 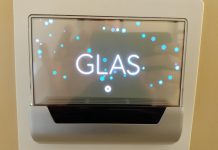