Best Buy Blog
Home Wearable Technology Review: The Microsoft Band 2 is a cut above the rest

Ever since the Microsoft Band 2 came out, I’ve been increasingly excited to get my hands on it and test it out. Microsoft’s launch announcement showed off an impressive arsenal of features for something that sits on your wrist all day. At a glance, the Microsoft Band 2 is without a doubt the most comprehensive wearable in its class. It has a laundry list of features which include the basics (step counting, sleep tracking, heartrate monitoring) but include a whack of other features too including elevation monitoring and oxygen monitoring. In addition. Microsoft’s using band in partnership with a whack of different major brand names. Here is a screenshot of some of those from the launch announcement, including Starbucks and Subway. The only catch is many of these partnerships have not been finalized and may only be available in the US, so your mileage will vary long term. 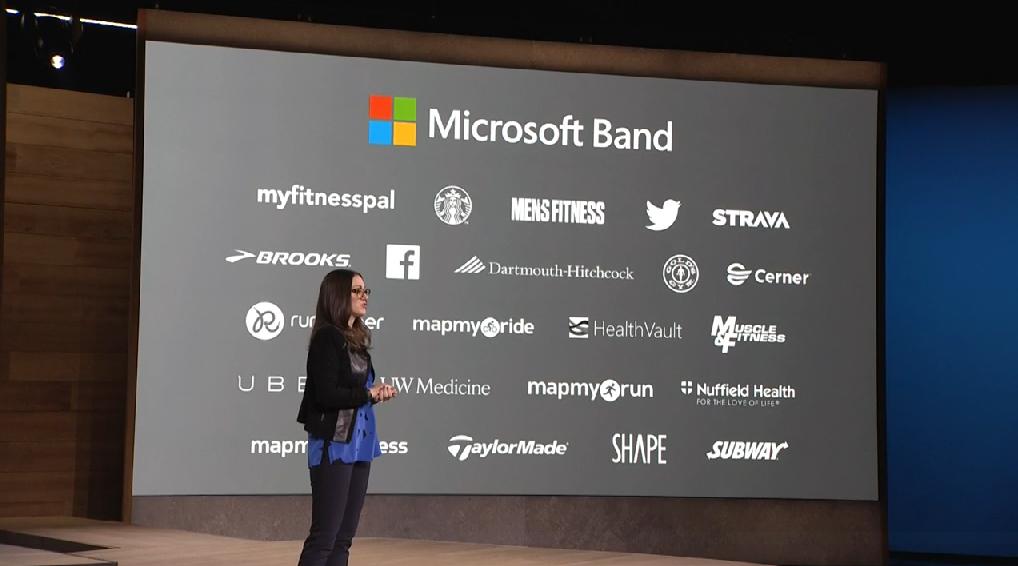 Without further adieu, let’s talk about whether the Microsoft Band 2 lives up to the hype.

Setting up your Band

Setting your Microsoft Band up is very easy and requires very little effort. All you have to do is download the Microsoft Health app and charge your Band. One of the best selling features comes before you’ve even got it on your wrist. The Microsoft Band 2 has a 2 day battery life (assuming you’re not using the GPS non-stop) and is up and running in approximately 90 minutes. Considering that the fully comprehensive Band experience requires you to wear it 24 hours (in order to track your sleep,) this is great. You’ll be able to stick it on the charger while you’re in the shower or a business meeting and it’ll get you through the entire day.

The initial setup is a simple process requiring you to simply follow the steps on the app, find your Band and sync it. Realistically, you’ll have it from the charger to your wrist ready to go in about 5-10 minutes.

It still functions like a smartwatch if you want it to

Despite all of the new features, the Band 2 still retains many of its old features. Your phone still functions like a fairly decent smartwatch. It’ll still tell you the time and it will also push texts, phone calls and useful notifications to you. I can often spend 4+ hours a day in meetings and with texts, tweets and phone calls coming my way all day, Band did a great job to help me sort out when to action all of these without having to excuse myself to look at my phone constantly. The bright AMOLED interface also meant that I never had to squint or play around with features to get my basic information.

The onboard software is fairly intuitive and is very easy to sort through the various options it offers up. You can switch back and forth between different modes and display options with the push of a couple buttons. For whatever you don’t feel you can do through the Band itself, you can modify with the help of Microsoft Health. 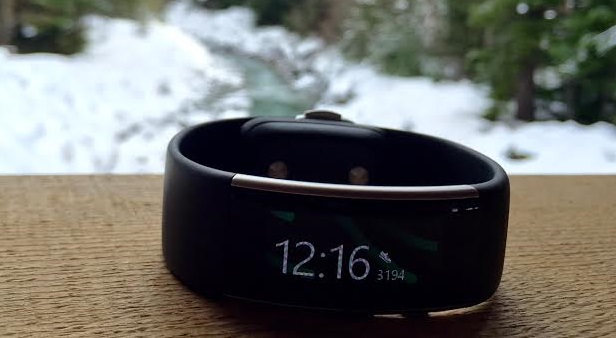 How to wear and how not to wear

One of the only problems I had with the initial setup of the Band 2 was how it fit my wrist. I had a really hard time getting it to sit comfortably on my wrist to properly track and measure my heartbeat and steps. In fact, at one time every afternoon on the first few days, part of my left wrist fell asleep and went numb and I couldn’t tell whether it was because Band was on too tight or if it just wasn’t used to wearing something. As I’d mentioned earlier, I have not worn a watch regularly since I was in grade school.  I realized that I had been pressing it on a vein and eventually adjusted a bit until I was wearing it comfortably and it didn’t have any impact on me at all.

Since the entire Band itself is sweat resistant, you don’t have to make any adjustments for your workouts at all. In fact, all you’ll really have to do is make sure you give it a quick wipe after any workout and put it back on. 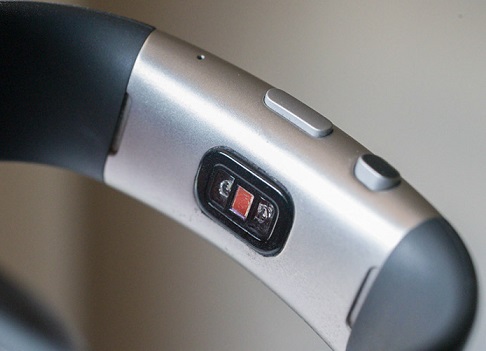 One of the best parts about the Microsoft Band 2 is that it basically records and outputs your step count in real time. While I wouldn’t really recommend walking around the streets with your head down looking at your tracker, you’ll notice as you walk that Band refreshes with your steps and keeps count as you walk. It doesn’t cache steps to memory and then output at the end, leaving less margin for error.

Band also wants you to remain as active as possible. If you aren’t active enough for its liking, it will remind you that it hasn’t tracked your activity for a little while and encourage you to get up and walk. This can be a little more annoying than it sounds but if it gets you to add a couple hundred steps per day with extra walks to the water cooler or photocopier, then so be it.

Be careful about double tracking

One of the things to be really conscious of is accidentally tracking your footsteps twice. This is possible if you have both your Band and your phone measuring your step counts through your motions. The Band gives you the most accurate readout but for the first few days, I realized that my phone was skewing my data and I’d realized that Microsoft Health was tracking some of my steps when I had my phone in my pocket. That was quickly cleaned up and my data was accurate once again. 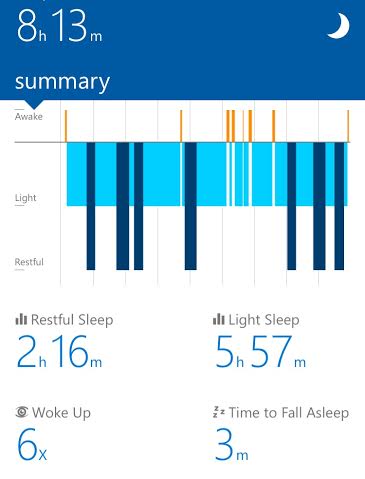 All of the data and measurables are tracked through Microsoft Health. You can deep dive into all of your workout, walking and sleep stats there. For those of you just interested in step counts, heartrate and calories burned, you can get those readouts from the wearable itself. For all else, the app will give you that information in much more depth.

You may have read this in a previous blog of mine, but the biggest expectation and curiosity I had about the Microsoft Band was whether it could help my sleep (or lack thereof.) Prior to reviewing the band, I was having a lot of problems sleeping and staying asleep at night. After a couple nights of sleep tracking, Band told me a few things. First off, I was actually getting more sleep at night than I thought and I was not awake as long throughout as I thought. My problem was that I was not getting enough DEEP sleep. At a time where you should be splitting your light and deep sleep approximately 50/50, mine was anywhere from 75/25 to 85/15. That’s why I would wake up in a zombified state and would feel like I never slept a minute. After tweaking a few things in my sleep routine (including finding ways to shut my mind off better beforehand and adjusting the temperature in my bedroom,) my sleep issues were basically fixed. It made other adjustments in my daily routine too. I cut back from 2-3 cups of coffee a day to 2-3 cups a week.

You can read more about this in this blog about using wearables to help solve sleep problems.

Other features of the Microsoft Band 2 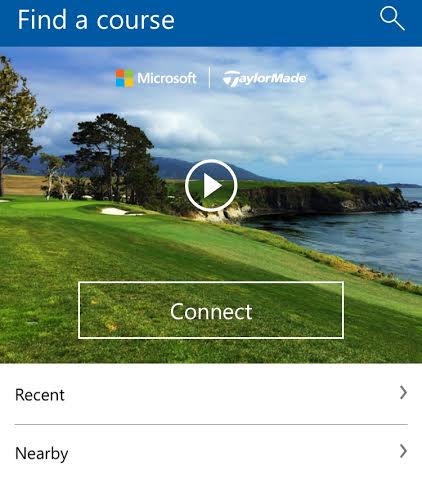 There are many other features of the Microsoft Band 2 that I have not discussed yet and would make this review far too long. These features include:

Why you need a Microsoft Band 2

Quite simply put, this is a best in show. The Band does so many things and it does it all right. It does things that I never thought something that sits on your wrist can do and it does it with very little input on your part. You get more out of the Band than you put into it and if you put more effort into understanding each and every little detail, it gives you more. With its sturdy casing and allowance for a rough and tumble lifestyle, you won’t have to worry much about breakage or cracks and the (eventually) comfortable fit on your wrist will make it so that you will hardly notice it is there. I was able to wear this nonstop and it didn’t even affect my sleep at all.

Why you may not need a Microsoft Band 2

While I’ve been hard at work singing the praises of the Microsoft Band, the truth is that it isn’t necessarily a wearable for everybody. It’s not cost prohibitive by any means, but it does cost more than the average wearable. The extra features it offers up make it worth the sticker price alone but they aren’t features for everybody. For example, my Fitbit owning mother wouldn’t make the leap to the Band because she’ll never use the majority of the exclusive features that it comes equipped with. I’ve seen my mom swing a golf club. Believe me, she’ll never use the golf tracking. She doesn’t do any hikes and will never use the elevation features. She doesn’t like wearing her Fitbit to sleep and won’t use the comprehensive sleep tracking. Despite being a superb wearable and one that I recommend 100%, it’s not for everybody. 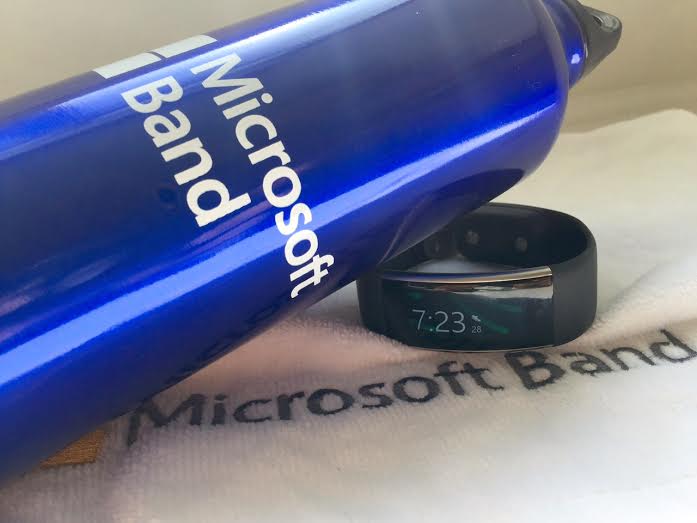 Regardless, if the extra features appeal to you and you can make the best of Band, it’s a no brainer and one of the most bang for the buck pieces of technology I’ve reviewed this year. Band 2 is a great addition for any member of the family looking for a wearable.

Microsoft Band 2 is now available at Best Buy and online at BestBuy.ca