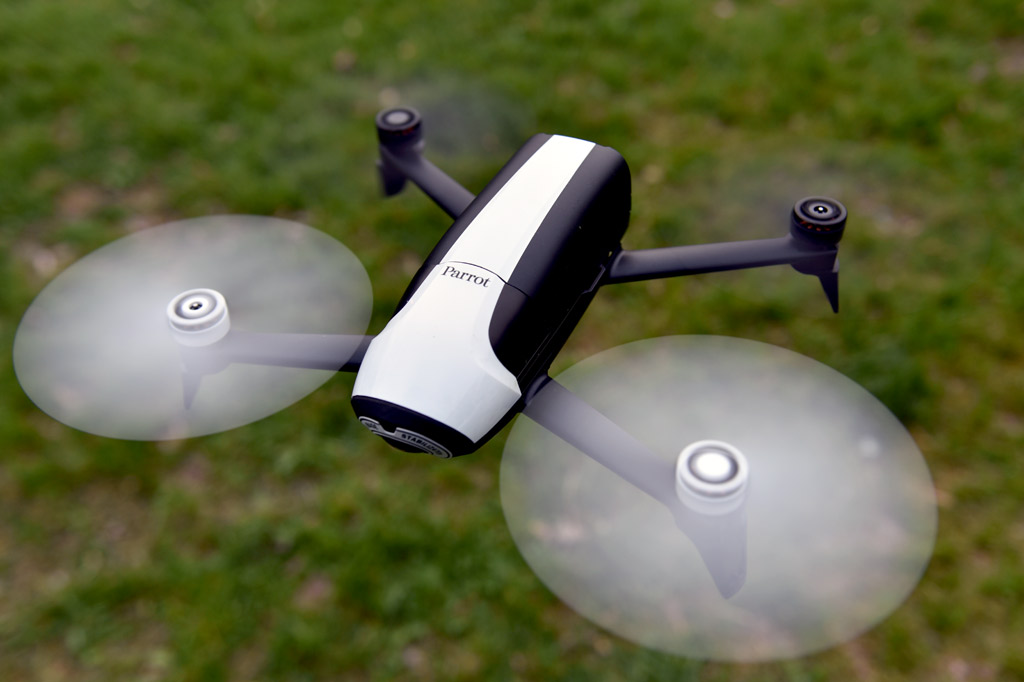 It’s hard not to like flying a drone, or even watching one being flown. The novelty of drones, in general, is still fresh, and as awareness grows, so do their capabilities. The Parrot Bebop 2 is one of the easiest to get acclimated with, maintaining the simple look and feel of its predecessor without changing a great deal about its performance.

To be clear, the Bebop 2 is not a leap forward from the original model. There are some iterative improvements, particularly with battery life, but many of the basic elements that forged the first Bebop’s abilities and features remain very much in place. That makes the Bebop 2 more ideal for consumers who like the idea of flying a drone more than taking amazing photos and video.

Like its predecessor, the Bebop 2 is a mix of lightweight materials with a deceptively rugged design. Weighing in at 500 grams, it’s quite light to carry, yet is heavier than before because of the larger 2700mAh battery, which now slides into place instead of having to be fastened with a Velcro strap. The body has a reinforced glass fibre to add more durability, along with plastic propellers that can withstand a fair bit of contact. Parrot engineered them to stop spinning on contact, thereby saving them from chopping themselves off by repeated contact with a hard surface. I noted this myself when a friend accidentally flew the drone into tree branches.

The quadcopter comes with a set of replacement propellers in the box, which is a nice way to add some peace of mind, in case one breaks from a crash. One thing I didn’t have in my review unit was side bumpers for indoor flight. Parrot doesn’t include them anymore, and it’s not clear if the ones that came with the original Bebop would fit the same way on the Bebop 2. Indoor flight therefore becomes riskier with exposed propellers.

The camera is the same as before, with 14-megapixel stills and 1080p HD video at 30fps (frames per second). It’s a 180-degree wide angle with a slight fisheye effect and a dustproof lens, digital image stabilization to keep footage from shaking too much. While this was pretty good a year ago, it’s not in line with where other drones have gone since.

Being able to fly up to 1,000 feet away while paired with an iOS or Android smartphone or tablet over Wi-Fi is decent, though it can go further when paired with the SkyController.

The Bebop 2 benefits from a more stable frame, leading to more stable flight. It’s still susceptible to strong wind gusts and can’t be flown in rain or snow, but it holds up nicely in any case. There isn’t a huge change to what the drone can do while in the air. The flips are essentially the same, though sliders now offer more customization in how high or how far you want to go.

Since the camera is placed at the front of the drone, it doesn’t angle quite as well as others that have a camera gimbal that tilts more. The Bebop’s camera does move, so it can tilt downward or upward, except going too far clips the corners, indicating the limits of the wide-angle onboard. More than that, image quality is decent, but not outstanding. Detail wasn’t as crisp as I would’ve liked, with flat highlights and shadows that also affect colour balance. This doesn’t happen as much when shooting in bright daylight or capturing vistas that are further away, yet is still prevalent throughout.

Time of day does matter, too. In bright daylight, output is noticeably better, whereas dusk, dawn or nighttime presents some of the issues noted above. If you’re not a stickler for the best possible quality, and care more about flight and shooting video from above, you will likely be fine with the results.

The 8GB of internal storage unfortunately has no expansion option through a microSD card. That’s not as many photos and clips as you may think, and so, transferring the content over to the mobile device and or a computer (by plugging in the Bebop 2 directly) will have to be done regularly to keep the internal storage open.

For $20 through the app, you can buy the Flight Plan add-on that brings in some smarter flying features to the Bebop 2. This includes setting multiple waypoints to give the drone a flight path it can follow before returning to you, along with something called Scenario Mode, where a flight path be mixed with changing altitudes, flips, photos, video and which way the camera should face. A small HUD screen embeds onto the map to provide a live view of what the drone is capturing. 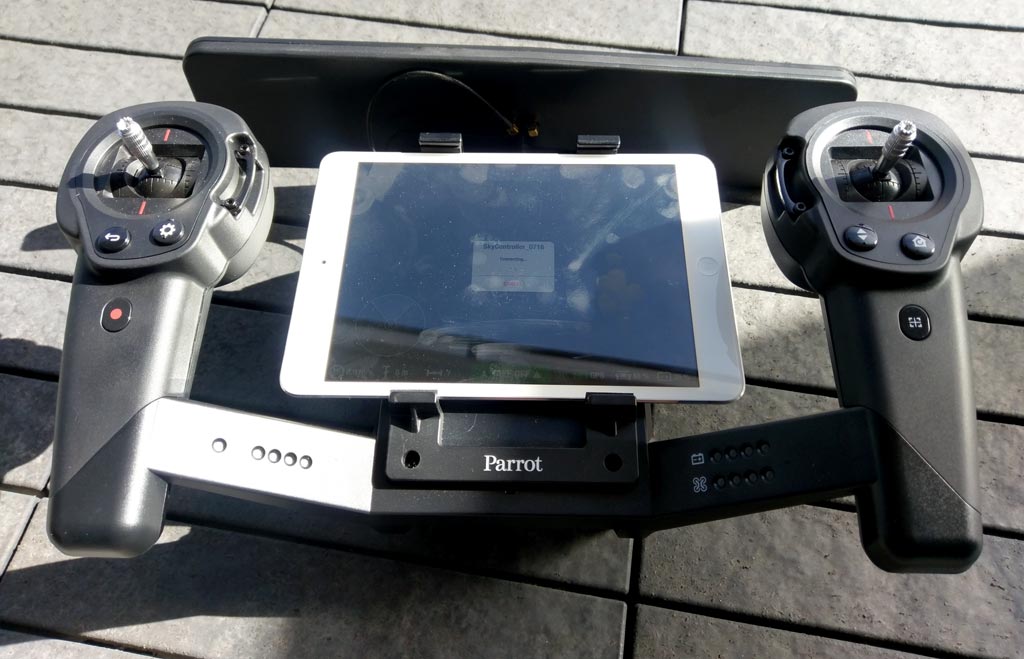 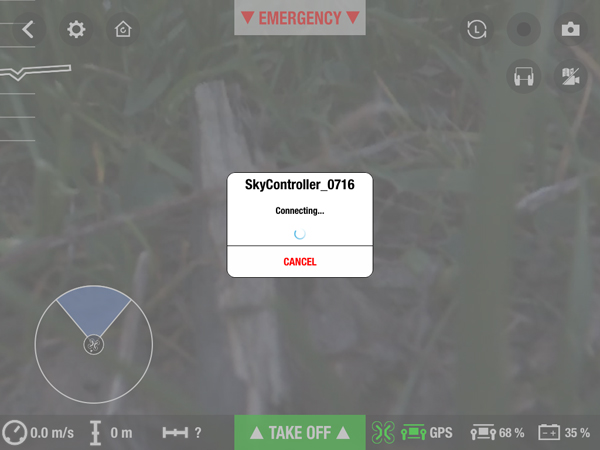 There is a major difference between flying the Bebop 2 with the free FreeFlight 3 app (iOS and Android) and the SkyController. This has always been a key distinction, and it really boils down to the lack of tactile feel in touching the screen to maneuver the drone. The SkyController has joysticks and shortcut buttons with a neck strap and holder for tablets or smartphones that makes piloting far easier.

I could look at the drone almost the entire time I was flying it with the SkyController, whereas the app forced me to keep looking down to make sure I was touching the right controls. This has been the case in the past with Parrot’s drones, so nothing new there. With practice, it does become easier, though it can’t match having physical controls.

The controller does use the same type of battery the drone does. Light indicators on the controller show battery levels for both.

A recent update to the app opened up the option to set a specific Wi-Fi password between the drone and smartphone, plus Banked Turn Mode, which tilts the drone more when turning to make aerial shots a little smoother during that process. The Flight Plan features do make the Bebop 2 more autonomous because it can be programmed in advance to fly certain ways. It would’ve been nice if Parrot simply included them out of the box, given what drones cost, but it’s the only way to expand on what is already there.

The Bebop 2 is really a mid-range drone in that it doesn’t fly as far or as fast as others do. It also doesn’t shoot as high-resolution as others do. Despite those limitations, it is a fun thing to play with, and pretty easy to get used to. If serious photography or videography is what you’re after, this isn’t the drone for you. If you are fine with decent photos and video that aren’t the best out there, then this drone could be for you. And if flying a drone is all the fun you’re looking for, you can’t go wrong here.

The Parrot Bebop 2 is available now, with or without the SkyController.