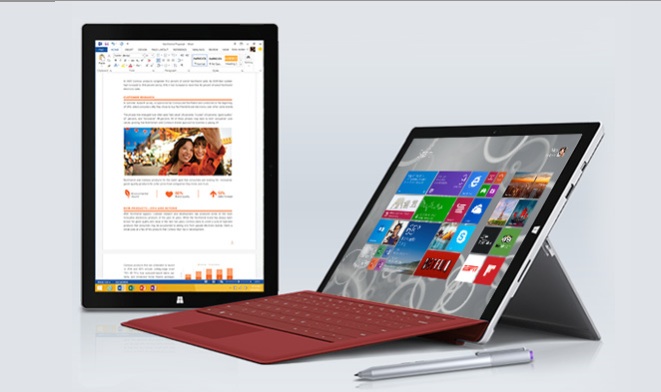 I recently took the time to visit Microsoft’s first ever Surface Café on Toronto’s Queen Street West. You can read about the session I attended where DC comic book artist (and the guy who currently draws Batman) Francis Manapul showed how Microsoft’s new tablet has become an integral part of his digital workflow. But I wasn’t just at the Surface Café for demonstrations and to see how the Surface Pro 3 went over with an audience largely comprised of creative professionals. This was my chance to get my hands on a Surface Pro 3 to see if it lives up to Microsoft’s claims of being the tablet that can replace your laptop. Here’s what I thought of it.

There’s no getting past the fact that the Surface Pro 3 is a very large tablet. At 29 cm x 20 cm, 9.1 mm thick and 798 grams, it’s significantly bigger than consumer tablets. The funny thing is, the new Microsoft tablet actually feels pretty svelte. 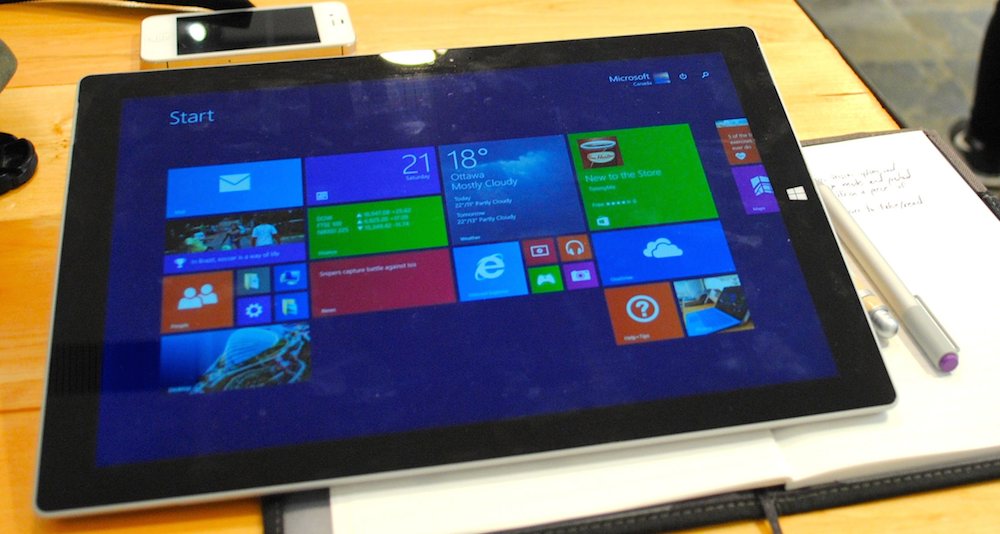 I suspect that’s partially because I approached it thinking this is really an ultra-compact PC (it uses an Intel Core CPU just like a laptop), which changes your perception from “bulky tablet” to “fantastically thin PC.” And I think that’s how Microsoft wants you to think of it too.

was the 16:9 aspect ratio display which made the device feel ridiculously narrow when holding them in portrait mode —the way I naturally do for reading or surfing the web. The Surface Pro 3 uses a 3:2 aspect ratio screen; this makes for a much more balanced tablet and is well worth any penalty in making the device slightly wider.

The large size pays off when it comes to the display, as you would expect with a tablet. At 12-inches and 2160 x 1440 resolution, the Surface Pro 3’s display is both larger and crisper than my laptop’s. It’s pretty bright, too.

As an added bonus (although Ultrabooks now have this feature too), the Surface Pro 3’s display is a 10 point multi-touch model.

I’ve always felt the kickstand was one of the Surface tablet’s best engineered features. It manages to get discretely out of the way when not in use, is surprisingly sturdy and the friction hinge was always solid.

On the Surface Pro 3, the kickstand is even better, allowing for far more flexible positioning while maintaining that solid feel. The downside to the kickstand —at least if you are looking at the tablet as a laptop replacement— is that it doesn’t work as well on your lap. The solid bottom of a notebook PC is more comfortable and more stable. 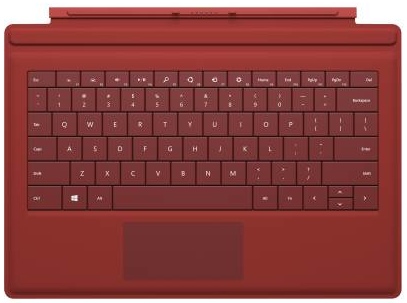 Microsoft had the Surface Pro 3s on display outfitted with the new and improved Type Cover.

Always one of the marquee features of the Surface tablets, the Type Cover is extremely thin, yet offers a full-sized mechanical key typing experience while doubling as a protective cover. On something this thin, the mechanical travel of the keys isn’t quite as good as with most laptop keyboards, but it’s still very usable. I can type pretty much at full speed using one of these. The Type Cover is also backlit, which is a feature I can’t live without in a laptop keyboard.

The new version boasts additional magnets in an attempt to make the assembled Surface Pro 3 and cover feel as close to a laptop as possible. The results are definitely better than previous versions —I really had to pull at the cover for it to slip off its attachment point on the tablet.

I found the trackpad wasn’t as responsive as I’d like, especially when clicking. Finally, a pet peeve: if Microsoft is going to market the Surface Pro 3 as a laptop replacement, they really should bundle the Type Cover with the tablet instead of making it an optional add-on.

All was good on this front. The combination of a Core i5 CPU with 4GB of RAM (Core i7 versions of the Surface Pro 3 will be shipping eventually) and an SSD made for speedy operation. I was running Photoshop and playing with a handful of Windows apps like Word and Excel, while running Internet Explorer with multiple windows open and Halo Spartan Assault and they were no moments when I wished the tablet had more horsepower.

However, if I were approaching this as a laptop purchase, I’d opt for the speediest CPU, biggest SSD and most RAM possible —you don’t have the same options for opening up a tablet for future upgrades that you do with a notebook PC.

When you cram a Core i5 processor into a case that’s only 9 mm thick, heat is going to be an issue. Microsoft somehow manages to put a fan in there too and one edge of the Surface Pro 3 is marked by cooling vents.

There was a lot of background noise in the Surface Café, so I couldn’t hear if the fan ever came on. If it did, I never heard it. But none of the Surface Pro 3 tablets I used were ever overly warm to the touch.

Microsoft makes a big deal about the new Surface Pen —included with the Surface Pro 3. It figured prominently in the Surface Café workshop I was part of and I found the stylus itself to be easy to use, nicely balanced and easy to keep track of thanks to its ability to magnetically clip onto the side of the tablet. 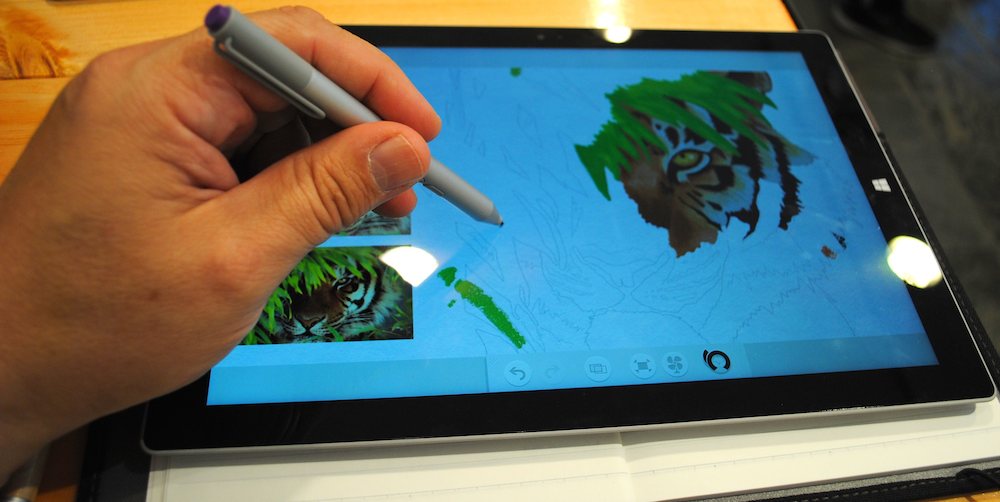 However, I found when using the Surface Pen to jot notes or draw, the crosshair pointer on the display was distracting (I know where the tip of the pen is) and made using it seem laggier than I’d expected. I couldn’t find a setting to shut it off. I spoke to the Microsoft reps and while the cursor can be changed to a different shape, there’s no option at the moment to turn it off. Fortunately that could easily be fixed in a future software update and an engineer I spoke with said the request has been heard frequently and escalated to the product development team. 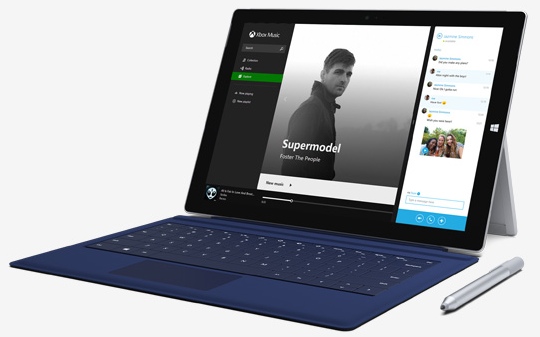 The Surface Pro 3 is not the device for casual tablet users. However, for business, productivity and creative applications, it makes a compelling choice. As a laptop replacement, it’s a relatively expensive proposition —unless you consider it to replace both a laptop and a tablet, in which case it may be a bargain in addition to a space saver.

Despite the clever kickstand/Type Cover combo, it’s not really suited for use as a laptop in the sense of using it on your lap. As a portable PC that sits on a desk all day, absolutely, but it really needs a solid surface to feel completely stable and with the kickstand and keyboard both extended, it takes up a surprising amount of real estate (a laptop base, in comparison, is fairly compact).

How each of us uses a laptop or a tablet can vary tremendously. The various factors I considered when putting the Surface Pro 3 through its paces may have a different weight for you than for me. When in doubt, take advantage of resources at Best Buy like user reviews or better yet, check out the Surface Pro 3 in person to see if it’s the tablet that could also become your next laptop.