If a router could be designated as a tank, the Linksys AC5400 might be it. While already large in physical stature, it’s the power under the hood that makes this unit as robust as it is, even if a good deal of what’s in there can’t be utilized by most devices yet. In many ways, this is a router that is built more for the next year or two than it is for the here and now, and if that appeals to you, the AC5400 is worth a look.

It used to be that a router was like a thermostat. You only really cared to look at it when you needed to confirm that something was working. When it wasn’t, that tended to be the time to troubleshoot an issue. Much of that has since changed because routers are so much easier to administer and manage now, thanks to better web and mobile apps that simplify most functions. The AC5400 does have a learning curve, however, and is primarily aimed at users who want to make the most of a super fast connection coming from their Internet Service Provider (ISP).

On the surface, the AC5400 indicates that it means business. With eight antennas surrounding the base unit, which has a thick and wide frame in itself, it needs room to spread out. This isn’t the sort of router you can easily just stick into a corner on a table somewhere — it needs some planning ahead.

The connections on the back are numerous, particularly the eight Ethernet Gigabit LAN ports — an absolute rarity in any router product. It might seem like overkill to have that many, but I disagree. The emergence of smart home connected devices sometimes requires a hub that plugs directly into the router to “talk” to said devices. The Philips Hue lights, Sonos speakers, Ooma Telo and Netgear Arlo are four examples, but there are several more. I’ll get to all that a little further on.

There are two USB ports, one 3.0 (in blue) and another 2.0 (in white). Usually, the faster 3.0 port is useful for plugging in an external hard drive to stream media, transfer files or as a computer backup, while the slower 2.0 port can be useful for networking a printer (though you can use this port for a second external drive, if you wanted to).

Being a tri-band, quad-stream router, the AC5400 is technically capable of 5.3Gbps per second of total bandwidth, split between two 5GHz bands and one 2.4GHz band. In reality, you won’t hit those numbers because today’s devices simply can’t handle that much bandwidth, and so, the speed and throughput are largely future-proofing features that should reap rewards later on.

This is also related to the Multi-User, Multiple Input, Multiple Output (MU-MIMO), an upcoming standard that will dramatically change how bandwidth flows to the devices connected to it. Except the only way this can work is with the devices supporting the feature, of which only a minute number currently do. Linksys has released USB adapters that work with Windows PCs, and it’s expected that Macs will be compatible in the late summer or early fall as well.

Setting up the AC5400 was really no different than setting up any other Linksys router. The web-based interface is exactly the same, including the step-by-step guide, and I was up and running with new network names and passwords in less than 10 minutes.

The interface is no different, either. All the various aspects of the AC5400 are there to manage and adjust, like the external drive, guest network, parental controls and much more. Advanced users will find deeper functions, like port forwarding, QoS and more, though it’s probably not going to be open enough for the tech-savvy tinkerer who wants to use a different firmware to truly customize the router. 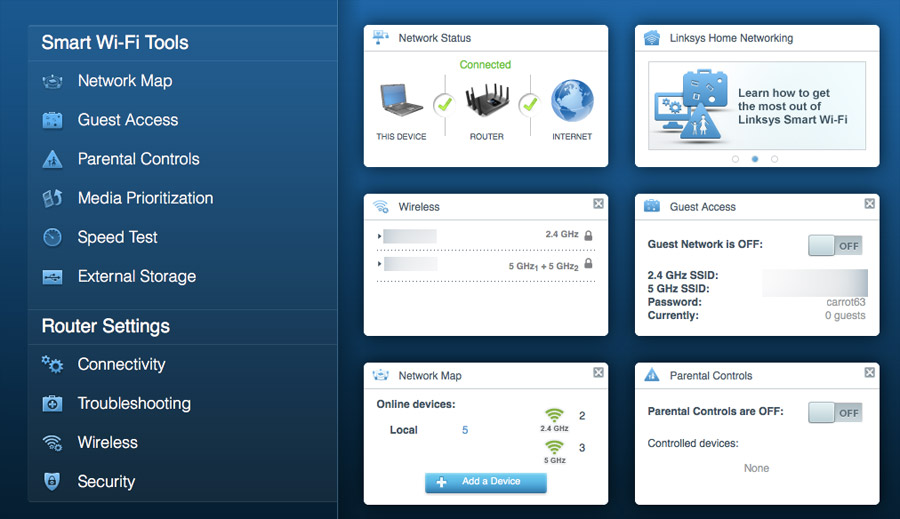 Media Prioritization has been part of Linksys routers for years, and it carries a little more importance here. Essentially, it allows you to set aside devices that would get high or normal priority in bandwidth, thereby ensuring the ones in the High bracket get the fastest speeds.

Linksys has also touted the AC5400 for its support of what’s called “Seamless Roaming”, where a Wi-Fi extender is used to amplify the signal toward weaker areas of a home. The extender part is nothing new, but in the past, it required a transfer of sorts that could momentarily knock out the connection, or you had to log in to the network ID of the extender itself. All that is gone with Seamless Roaming because the virtual handshake that takes place is seamless, so even if you have switched to the extender, you wouldn’t notice it on your device.

Again, that only applies in cases where a Max-Stream extender is being used, not just any extender. Anything that isn’t Linksys Max-Stream will simply default to the old method. The range on this router is already quite good, as it is, but an extender is an option in a home where it’s tough for a strong signal to reach.

Plugging in an external hard drive is great if you want to expand storage on your computer and transfer files back and forth, or even stream media directly from the drive. The content would be readable from a number of apps and devices. Plus, you can periodically back up your Mac through Time Machine, but not through the USB port. Technically, it is possible to do it through a network drive plugged in via one of the Ethernet LAN ports.

In the AC5400, Linksys largely solved two challenges I’ve had in the past. One was range and the other was consistency at further distances. The two are essentially related, so by fixing one, it pretty much fixed the other.

The AC5400 is one impressive piece of consumer networking gear. Not only super fast, but also good at spreading out the connection. The eight antennas certainly help, though not all of them are working at the same time. It will take MU-MIMO going mainstream to start doing that, and we’re at least a year away from that, I would say.

In any case, this router performed splendidly. Strong signals and consistently fast speeds combined for solid connections at further distances. Normally, a router’s signal dissipates across distance and because of obstacles, like walls, and the AC5400 handles all that with aplomb. Even at a 50% loss a few rooms away, I was getting more than enough to stream and surf without incident. Mind you, this is the type of router best suited to really fast connections coming from your ISP. I’m talking anything above above 50Mbps, but especially above 100Mbps and up to 250Mbps or even 1Gbps downstream. Those plans cost more per month, and it’s only right that you get the most out of them. The routers that come from ISPs tend to be terrible at doing so.

The question is how much better will this router be as the technology it supports starts rolling out to consumer devices. Right now, the AC5400 is limited by what’s out there, meaning the potential to be that much better is more than palpable.

In fact, Linksys took the unprecedented step of offering a three-year warranty for it, in part to acknowledge that there is still plenty to add to the unit within that timeframe.

For any user with the need for speed (and throughput), the AC5400 delivers in droves. It’s a monster router, and built for users who need serious power. Think of throttle and torque in a vehicle — this is the router equivalent. Gamers will appreciate the consistent throughput to ensure nothing goes wrong while playing online. And streaming video, music and surfing the web is a breeze. Once MU-MIMO goes mainstream, the way it will distribute the connection to multiple devices simultaneously will be a major leap forward for in-home connectivity.

That being said, if you don’t subscribe to a super fast connection from your ISP, then there’s no real need to go with a router this loaded. Something else, like the Linksys EA7500 would be a better option in that case.