You’ve heard the rumours: Linksys is a releasing monster new Wi-Fi router. The most powerful to hit the market yet, featuring four antennas, a dual-core 1.2GHz CPU, 256MB of DDR3 RAM, Wi-Fi speed of up to 1,900 Mbps, eSATA and USB 3.0 ports, plus support for Linux and open source firmware. The highly anticipated Linksys WRT1900ac is expected to launch on April 11 and you can get it first at Best Buy! You can order the hottest home router ever here. Here’s a quick preview of what you can expect from the iconic black and blue beast —look for a review here in April.

A few weeks ago I reviewed the Linksys AC1900 Smart Wi-Fi router and came away impressed by both the performance of the hardware and the Smart Wi-Fi network management software.

However, Linksys is seriously upping the ante with the WRT1900ac and the tech community has been buzzing in anticipation of what promises to be the most powerful router released for the home and small business markets. The router won a CES 2014 award in the home networking product category, where it was described as being “on the bleeding edge of what is technologically possible.”

Wireless routers have adopted an almost appliance-like appearance, designed to blend in or not be seen. The WRT1900ac throws that approach out the window with a retro style reminiscent of one of the most popular routers of all time: the Linksys WRT54G (first released in 2002). Clad in blue and black with its four antennas prominently visible, this router looks like it means business.

With support for the latest 802.11ac Wi-Fi standard, this router can deliver speeds of 1,300 Mbps on the 5GHz band and 600 Mbps on 4GHz, for a combined speed of up to 1,900 Mbps. Four adjustable antennas offer superior coverage to the three offered by most wireless routers. Performance extends to attached storage too. Besides the expected USB 2.0 and 3.0 ports, the WRT1900ac offers an eSATA port capable of data transfer speeds of up to 3Gb/s.

If you like the Smart Wi-Fi web management tools Linksys offers with routers like the AC 1900 (EA6900) then you’ll be happy to hear the WRT1900ac also supports this monitoring and management option, including the iOS and Android apps.

Besides its own software, the big news is the WRT1900ac supports customized open source firmware from sources such as Tomato and Open WRT.

As mentioned in the intro, Linksys is sending a test unit prior to release, so look for a full review of the router on Plug-in sometime in April. In the meantime there are two dates to keep in mind: 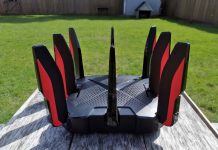 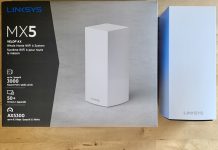 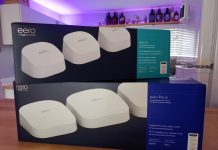