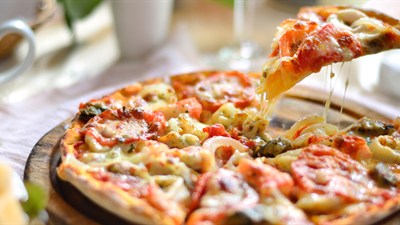 A lot of people do a pizza night at least once a week, and for many of us that night is usually Friday. Having pizza for dinner is a nice, casual start to the weekend and there are so many different varieties you just can’t get bored of eating it.

You might have heard that pizza has its origins in Italy, but it’s actually the word ‘pizza’ that first made its appearance in Italy in 997 AD. Long before that people were adding ingredients to flat bread dough or focaccia, and historians think they can trace pizza type recipes all the way back to Neolithic times.

You have to wonder if they had pizza night way back then? If they did, they probably didn’t have the types of pizza we have now, or the gadgets we can use to make them. I love the Breville Crispy Crust Pizza Maker. It’s like having a real pizza oven in your kitchen. I’m also a fan of the Breville Pizza Stone for extra crispy crust.

There are many different pizza recipes out there, but these are a few of my favourites. 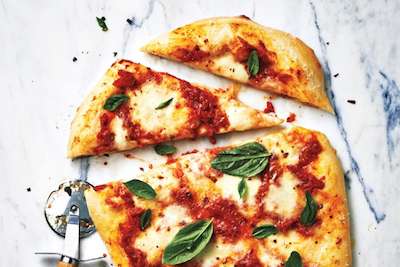 Photo and recipe from CanadianLiving.com.

Any great pizza starts with the perfect pizza crust, and this pizza crust from Canadian Living is definitely one of the best I’ve tried. If you like a gluten free crust, you can sub in 2 cups of Namaste Flour for the all-purpose flour.

In large bowl, whisk together 1-1/2 cups of the flour, yeast and salt. Using wooden spoon, stir in warm water and olive oil until ragged dough forms.

Turn out onto lightly floured surface; knead dough, adding as much of the remaining flour, a little at a time, as needed to make smooth, elastic dough (slightly tacky to the touch, but won’t stick to hands or work surface), about 8 minutes.

Transfer to greased bowl; turn dough to grease all over. Cover with plastic wrap. Refrigerate for 24 hours. (Orlet rise in warm, draft-free place until doubled in bulk, about 1-1/2 hours.) 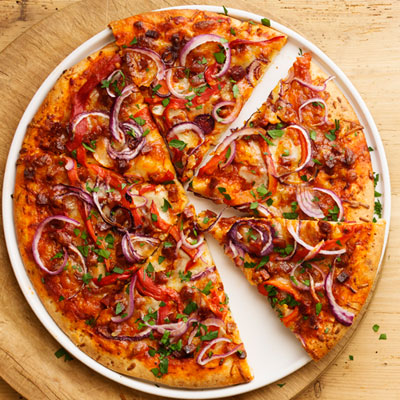 Photo and recipe from Delish.com.

Until I tried this recipe for Spanish Tapas pizza, I’ve only ever had great Spanish pizza in a restaurant. The scent of the chorizo sausage baking in the oven is enough to send your tastebuds into overdrive.

Bake 15 to 20 minutes or until crust is golden brown and cheese has melted. Garnish with chopped parsley. 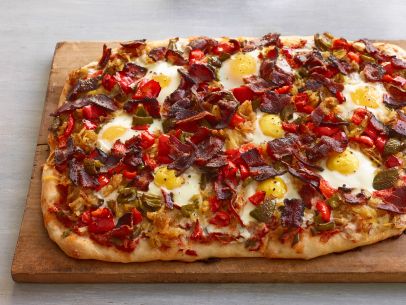 Recipe and photo from the foodnetwork.com.

Did someone say bacon? Mix it up with salsa, add a few eggs, and you have breakfast pizza for dinner. It’s time consuming to make, but This.Is.Delicious.

Make the salsa: Combine the whole tomatoes with their juices, diced tomatoes, cilantro, onion, garlic, jalapeno, sugar, cumin, 1/4 teaspoon salt and the lime juice in a food processor or blender. Pulse several times until it reaches the consistency you like. Set aside.

Prepare the pizza: Place the oven rack in the lowest position and preheat to 475 degrees F. Fry the bacon in a large skillet over medium heat, turning occasionally, until chewy, about 8 minutes; drain on paper towels. Chop into bite-size pieces.

Meanwhile, heat 1 tablespoon vegetable oil in a separate large skillet over medium-high heat; add the frozen hash browns and cook, stirring occasionally, until they just start turning golden brown, about 7 minutes. Remove from the pan and set aside. In the same skillet, fry the red and green peppers in the remaining 1 tablespoon vegetable oil over medium-high heat until they’re nice and brown, about 5 minutes. Set aside.

Roll out the pizza dough on a lightly oiled baking sheet. Spread 1/2 cup salsa over the dough, then evenly distribute the sliced mozzarella over the salsa. Sprinkle with the hash browns, bell peppers and bacon.

Make 8 little wells in the filling here and there all over the surface of the pizza; crack the eggs into the wells. Sprinkle with salt and pepper to taste. Bake until the crust is golden brown and the eggs are set but still slightly soft, about 15 minutes. Cut into large pieces and serve with the remaining salsa. 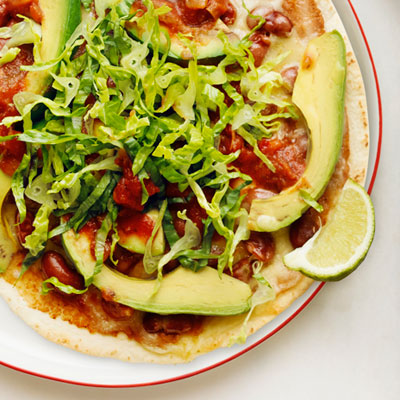 Recipe and photo from
Delish.com.
Contrary to popular belief, you don’t have to go to the lower southern United States to get good Tex Mex. This Tex Mex pizza is made with tortilla shells and has just enough chilli powder to give it a good kick. If you like spicy, I recommend another 1/2 tsp of chilli powder and a dash of Frank’s Red Hot.

Bake 12 minutes or until tortillas are crisp around edges, switching racks halfway through cooking. Top with chunky salsa and shredded romaine lettuce. Serve with lime.

I hope these recipes help you enjoy your weekly pizza night even more than you already do. If you need some pizza making supplies, look no further than Pizza Pan & Serving Pieces on Best Buy right now. Here are some of the pizza accessories I can’t live without.