I remember the first time I tried on a VR headset. I think it may have been at a Google event, but I’m not 100% certain on that. It was a while ago … Virtual reality was interesting, but clearly still at the demo stage. A few years later, I was testing VR headsets with controllers so I could interact with the system. I did a lot of virtual boxing, and some spray painting. The technology was progressing, and content was beginning to catch up to the potential. Today? The sky is the limit. Right now, you can buy an all-in-one VR headset like the Oculus Quest 2 that has no wires, its own integrated processor, 3D positional audio, and lenses with a resolution of 1832 x 1920 pixels per eye.

With the new reality of virtual reality—next generation hardware combined with a rapidly growing base of content developers—the things you can do with VR technology is practically unlimited. Here are some examples of what you can expect to be able to do with a VR headset. Some of it will be surprising if you’re still thinking of those early VR experiences.

Gaming was naturally one of the first applications to be brought to virtual reality headsets. However, early versions were primitive. Blocky graphics, sluggish responsiveness, and motion hindered by painfully slow refresh rates on the headsets of the time.

Today, even the most hardcore gamer would be impressed by VR gaming. Every genre imaginable is represented including sports, first person shooters, battle royale, survival, puzzle, racing, horror, music rhythm games, and more. Multiplayer is increasingly an option. There are even VR versions of popular franchises like Skyrim, and Resident Evil.

Think of the lengths that you go to with a PC gaming rig to make the experience as immersive as possible. Ultra wide-screen, curved monitors to maximize the field of view, surround sound, and more. With the latest VR technology, high resolution, 360-degree views, fast refresh rates, and ultra-precise hand-mapped controls bring games to life like never before.

Over the past two years, many of us have had to put travel plans on hold.

Virtual reality had always shown promise for exploration and the latest generation of virtual reality technology takes that to new levels. You can visit exotic locations with 360-degree views. There are also VR apps that make the experience even more interactive, with options like exploring with a friend, and using a camera to snap virtual photos.

3. Get in the ultimate home workout

Staying in shape has been another challenge for many of us over the past two years. Between lockdowns, gym closures, and the need to maintain physical distancing, the home gym has become the go-to solution. Unfortunately, that introduces many limitations, including boredom.

Virtual reality to the rescue! There are a huge number of fitness apps to choose from. You name an activity, and there’s a VR version of it so you’ll never get bored. Many of these are actually fun in disguise—explore the Grand Canyon or take on your friends in a virtual dance-off and you’ll find yourself building muscle and burning calories without it really registering that you’re exercising.

And yes, you can still box in VR. But with the latest virtual reality technology, the experience is greatly improved with life-like graphics, real-time tracking of your every move, and far more challenging opponents.

4. Binge watch TV with your friends

Binge watching your favourite TV show is always a popular activity. What makes binge watching even more fun is doing it with friends. Virtual reality lets you live the binge watching experience while sitting on the same couch with your friends without any of you having to leave your home. Your avatars are the ones on a virtual couch, but you’re interacting in real-time while watching your real video on a virtual TV—which can be as big as you want.

Virtual reality applications let you watch live events from the comfort of your home. Professional sporting events and games, concerts, conferences, and even standup comedy shows. Next generation VR technology makes you feel like you’re there watching in person. But there’s no inflated parking price to pay, you can bring your own snacks and drinks instead of paying concession prices, there’s no guy dancing in front of you and blocking your view, no line-ups for the bathroom, and no need to wear a mask.

6. Get virtual with your social media

Facebook parent company Meta also owns VR pioneer Oculus, so it should come as no surprise that social media has a big presence in virtual reality. Get closer than ever with your social media friends in VR, including sharing popular content that’s shot in 360-degrees to take full advantage of your VR headset. The next generation of social media just launched in VR with Horizon Worlds delivering Meta’s vision for the metaverse.

Virtual reality is great technology for creative types. There is a huge selection of VR apps focused on creating using the real-time motion controllers in your hands. This can be as simple as “painting” your virtual space, or could tackle the complexity of using a virtual potter’s wheel to create your own masterpieces in digital clay. With VR technology you can be creative in virtually any medium, without having to pay for costly supplies, and without having the mess to clean up afterwards.

Virtual reality isn’t all fun and games. And fitness. With so many people moving to remote or hybrid work and learning, the push is on staying connected. Video conferencing is better than nothing, but it doesn’t really replicate the feeling of sitting in an office with a group of co-workers or classmates. Virtual reality—with avatars, virtual environments to move around in, and the ability to share files—does a much better job of helping people stay connected, even though they may be thousands of kilometres apart.

How do I get in on all these cool VR activities?

Getting set up to take full advantage of virtual reality used to be a question of picking a headset, controllers, and a PC powerful enough to run the apps. Today, the VR headset is the key. You can still buy a connected headset and a gaming PC for the ultimate experience, but there are now headsets that are powerful enough to run virtual apps on their own with no PC needed and no wires.

Note: App images are courtesy of the MetaQuest app store. 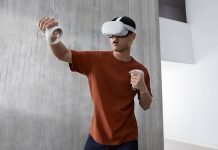 3 accessories you need for your Oculus Quest 2