Best Buy Blog
Home Video Games Review: Kirby Planet Robobot: suit up and get ready to have some... 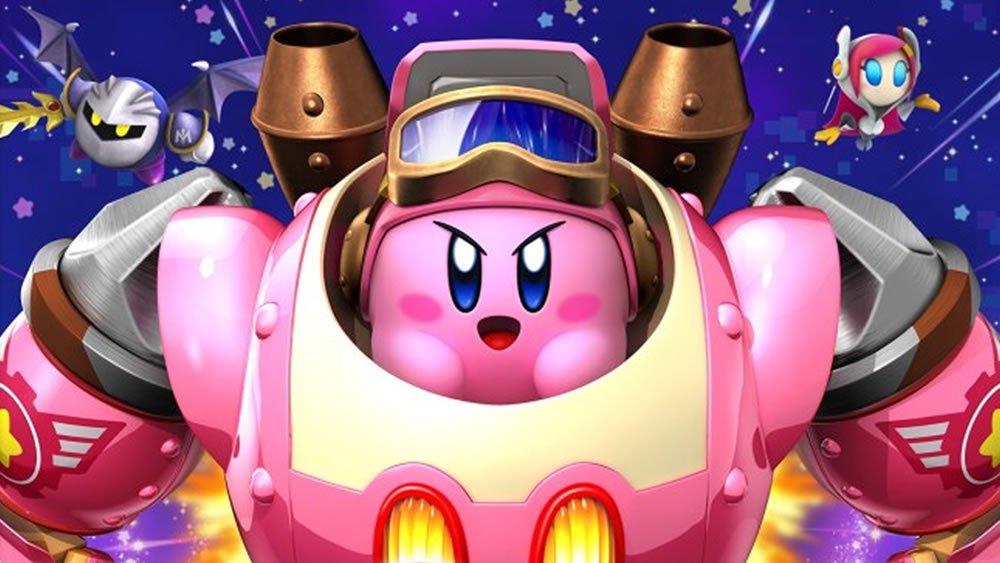 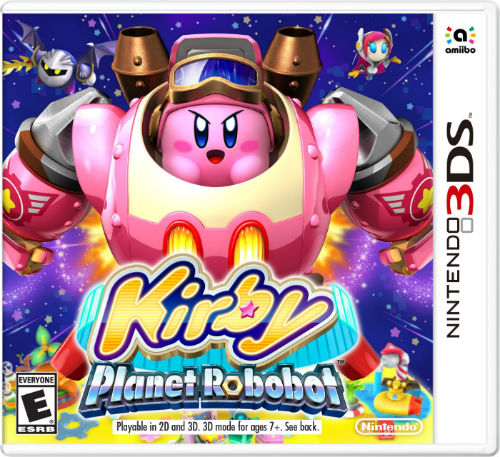 Kirby’s back for another adventure on Nintendo 3DS, and personally, I’m tickled pink. You see, Kirby games are among my favourite that Nintendo produces as they’re all generally very light-hearted, colourful, and just plain fun to play. This easy-breezy, feel-good franchise always seems to deliver solid results, and Kirby: Planet Robobot is no exception.

Using the same graphics engine as 2014’s delightfully charming Kirby: Triple Deluxe, Kirby’s newest game looks just as bright and beautiful as its predecessor, albeit with an all-new Sci-Fi twist. Kirby’s usually lush, green homeworld of Planet Popstar has been remodelled with a futuristic, metallic sheen, due to the machinations of the Haltmann Works Company—an evil organization out to seize Popstar for their own. Fortunately, Kirby discovers he can use Haltmann’s own technology against them, giving him the power to once again save the day. 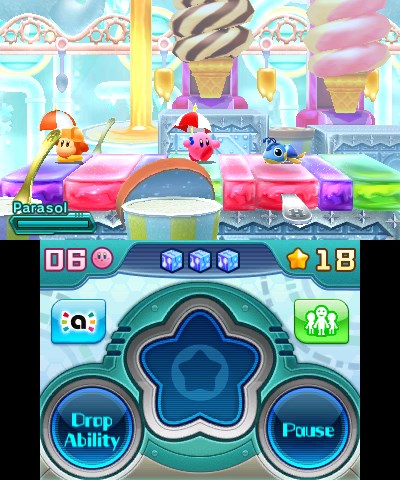 A peaceful day on Planet Popstar, when…

Planet Robobot begins on a normal, serene day on Planet Popstar when suddenly and without warning, the nefarious Haltmann Works Company descends from the skies of Dream Land and overruns Kirby’s homeworld with machinery. After futile attempts to stop HWC by King Dedede and Meta Knight, the story shifts to our plucky pink puffball—whom to the surprise of no one who played any of this past games—is dozing off under a tree, completing unaware his land has been invaded. After waking up and realizing Popstar is being transformed into a steely nightmare, Kirby bravely sets out to the rescue, yet again. 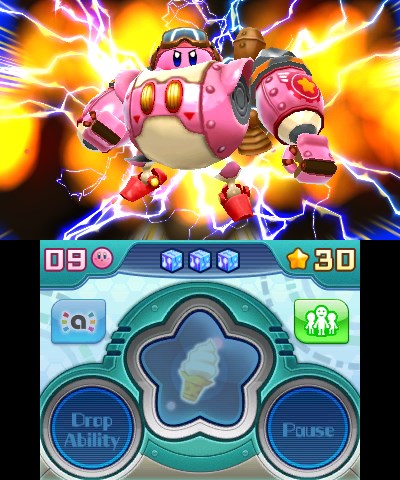 Very early into Kirby’s journey he encounters one of Haltmann’s invading soldiers piloting a large mech suit (called Invader Armour), which turns out to be a blessing in disguise. After defeating the robotic enemy, its pilot pops out, prompting Kirby to hop into the cockpit and commandeer the machine, transforming him into the game’s signature “Robobot Armour.”

This powerful, shape-shifting mech suit gives Kirby a whole new offensive arsenal that changes the core Kirby gameplay in many exciting ways. To begin with, he can now literally destroy most objects in this path, including formerly unbreakable steel blocks (that often reveal secret paths), dangerous hazards like oversized swinging mallets, and oncoming traffic consisting of buses and cars. Kirby’s ability to alter environments is essentially on par with his Triple Deluxe Hypernova Kirby form, only in this game, the Robobot Armour is much more plentiful—you can find it in nearly every stage. 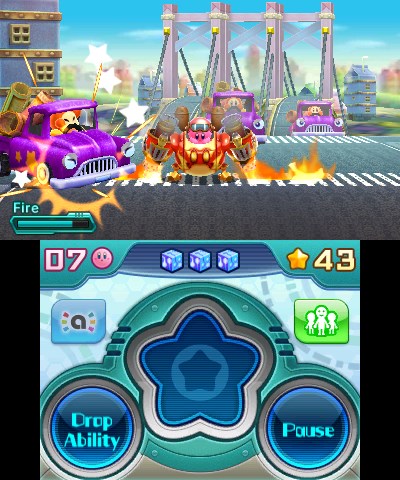 Like Kirby himself, the Robobot Armour can copy the abilities of enemies, in this case using the suit’s scanner tech. There are 13 different robot “modes” you can transform into, each with their own cool new powers and uses. For instance, in Bomb Mode, Kirby can unleash miniature walking bombs that can walk up walls (great for taking up enemies above or triggering hard-to-reach switches), while in Cutter Mode, the suit can fire huge spinning buzz saws capable of obliterating enemies and bosses alike.

There are two special forms—Wheel Mode and Jet Mode—that mix up the gameplay significantly, converting stages (or parts of them) into a fast-paced racer or side-scrolling shooter, respectively. These are my favourite modes in the whole game, since the action turns fast and furious; a big departure from the usual slow and methodical (though still enjoyable) pacing of the game. Of the two, Wheel Mode is the most interesting since you can “flip” between the foreground and background planes, and a lot of the racing stage puzzles require you to deduce the best path to take.

It’s worth pointing out that you can’t use the Robobot Armour anywhere you please, but rather the level designers have created designated areas where you play as Kirby, and other spots where you can hop inside his armour. The way this is controlled is through the size of doors that connect stage areas together: only Kirby can walk through small, standard-sized doors, and only in his Robobot Armour can he lift the heavy, large steel doors. This creates a nifty, unpredictable flow to the gameplay, as you never know whether a much-desired Robobot suit is awaiting you behind the next door. 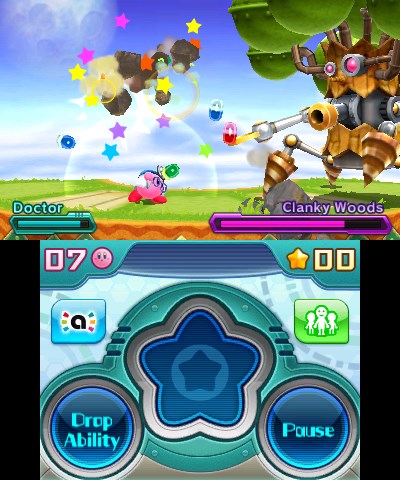 Copy abilities are back, new ones too

Planet Robobot features a hefty 27 different copy abilities that Kirby can acquire by inhaling enemies and mimicking their moves. Fan-favourites like Archer, Beam, Circus, and Fire are back, but you’ll also want to try out the three brand new ones: Poison, ESP, and Doctor.

In Poison form, Kirby becomes a noxious menace capable of spitting purple poison on the ground, gush poison upward out his head, and blowing out a puff of deadly air. ESP imbues Kirby with psychic powers, including teleportation attacks, but the most useful ability in this form is creating bubbles of psychic energy that can be moved anywhere on the screen, even through walls. Finally, Doctor gives Kirby a super cute doc’s outfit to wear and lets him toss pill capsules, mix potions, and dash at enemies using a medical clipboard.

With more than two dozen different copy abilities in Planet Robobot—including these super fun new additions—you’ll have a blast experimenting with different abilities, figuring out which one(s) you need need to solve the game’s many puzzles, and figuring the most effective ways to defeat enemies and bosses. 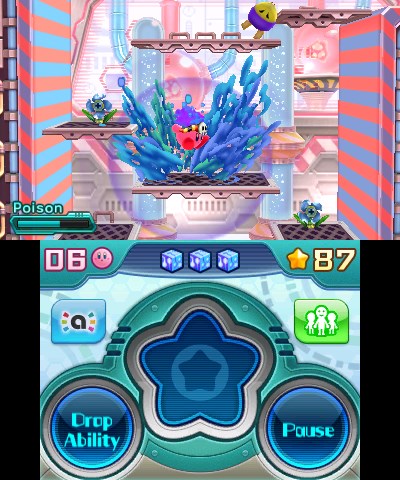 The presentation of Planet Robobot is par for the course for the Kirby franchise: colourful graphics, cute aesthetics, and a very catchy soundtrack. There’s an superb variety of scenery, perhaps more so than in Triple Deluxe, such as grassy plains, underwater caverns, bustling city streets, robotic lairs, and some surprisingly treacherous casinos. The graphics certainly don’t push the Nintendo 3DS to its limits, but the pleasing art style and dazzling vibrancy will surely bring a smile to your face. As for the soundtrack, it’s typical upbeat fair that adds to the game’s joyous, happy-go-lucky atmosphere.

On top of the game’s Story Mode, there are four additional modes, two of which are accessible from the start, and two that unlock after you complete the story. Playable right away are Team Kirby Clash, an action RPG sub-game for up to four players, and Kirby 3D Rumble, a 3D isometric sub-game where your goal is to strategically take out enemies to maximize points. In Team Kirby Clash, my preferred mode of the two, you can choose from four different hero types (one healer, one mage, and two different types of fighters) and challenge increasingly more difficult enemy bosses. This mode is awesome if you have friends with Nintendo 3DS systems, as only one game cartridge is needed with everyone connecting via Download Play. On the other hand, Kirby 3D Rumble is a single-player only mode that’s fun to play through once, but only lasts about 30 minutes. 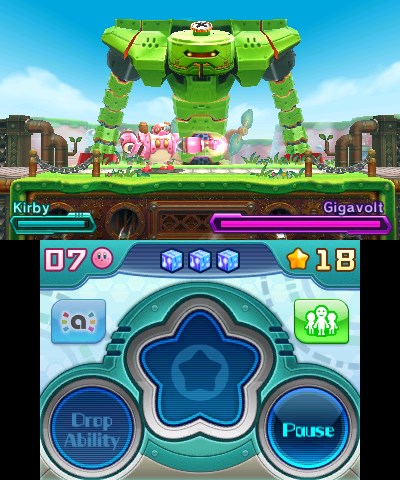 Once you complete the Story mode, you’ll unlock two new game modes: The Arena and Meta Knightmare Returns. In the Arena, you need to battle your way through 11 bosses in a row, only stopping briefly in between matches to pick up a new Copy ability and perhaps some food to restore a bit of health. Kirby games in general aren’t very difficult, but this particular mode is pretty demanding considering you’re only given one life. The best new game mode by far though is Meta Knightmare Returns, a compact speedrun mode that whisks you through all six worlds and challenges you to complete them as fast as you can. As the name implies, you play as Meta Knight, who is naturally much more powerful than Kirby (nearly as strong as him in the Robobot Armour) and can also let loose strong special attacks, as well as boost his speed or heal himself. You can spend hours playing this mode to try and improve your overall time, extending the game’s longevity significantly.

Kirby: Planet Robobot is a wonderful adventure that Kirby and platforming fans are sure to love. The graphics are charming and inviting, the sound is upbeat and soothing, and the story is every bit as cute as you’d imagine. Kirby’s all-new Robobot Armour is an excellent addition and opens up a wealth of fun, interesting new gameplay options to the tried and true Kirby mechanics. Throw in an abundance of game modes to give this game extend life, and you have tons of value packed into this tiny Nintendo 3DS cartridge.

+ Robobot Armour is tons of fun

– More of an evolution of the franchise, than a revolution