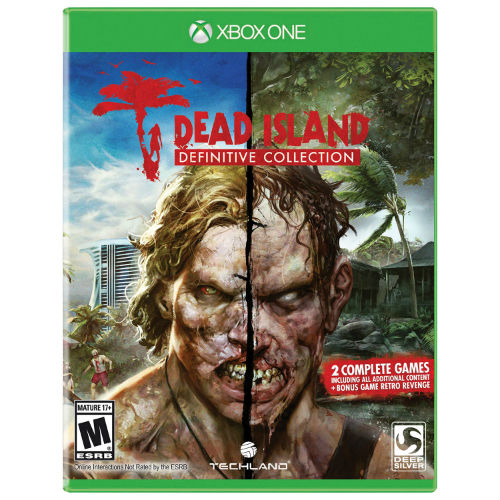 Return to the tropical island para-die-se

Techland and Deep Silver’s open-world zombie survival franchise Dead Island is shambling its way onto PS4 and Xbox One in glorious, grisly high-definition with the Dead Island: Definitive Collection. This “ultimate” collection contains the original Dead Island and its undead successor Dead Island: Riptide, both fully remastered in 1080p resolution and containing all previously released DLC and patches. If you’ve never experienced these immersive, horrifying action RPG games before—or want to revisit them in stunning HD—then this compilation is simply to die for. 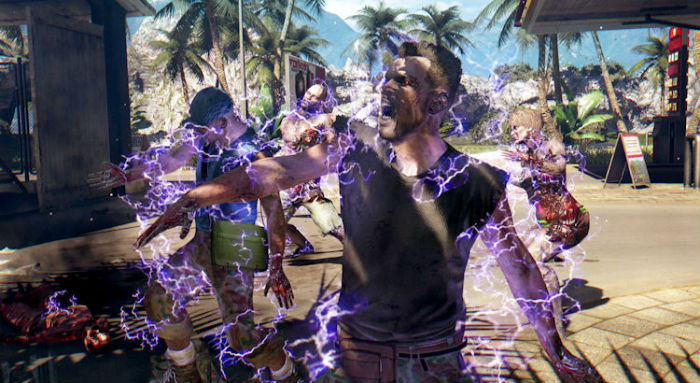 To this day, the original Dead Island stands as one of the industry’s most vivid cases of what can happen when a game’s development and its marketing are fundamentally misaligned. I still remember watching the jaw-dropping, slow-motion debut trailer, which quite provocatively presented a zombie survival game full of dramatic moments with strong emotional overtones, and practically salivating in my seat. Of course the final game was a far cry from this carefully orchestrated cinematic, containing virtually no emotional spark whatsoever, and instead shifting the focus entirely on brutal zombie hack-n-slash combat and open-world island exploration.

Truthfully, Dead Island attempts to reel you in emotionally, but the waxwork characters and hit-or-miss voice acting coalesce to create an utterly risible, ham-fisted story that’s as quirky as SEGA’s House of the Dead, with none of the self-depreciating satire or rib-tickling, B-movie shticks. However, once you set aside Dead Island’s deadpan story, what’s left is a meaty adventure full of nail-biting zombie slaying action, addictively deep RPG elements, and a vast, gorgeous island to discover. 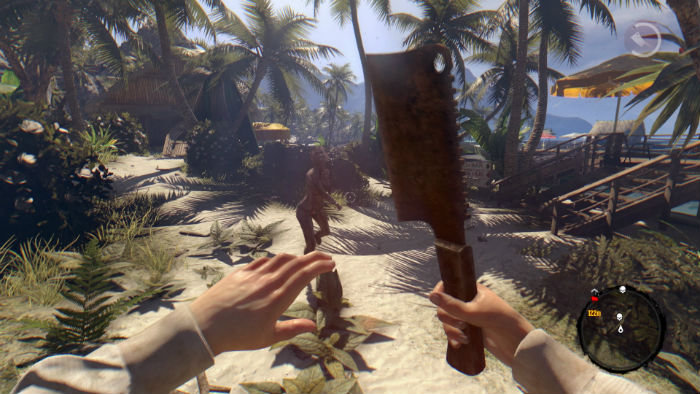 Being a “remastered” collection, the first thing you’d expect from Dead Island: Definitive Collection are improved graphics, and in this area, it certainly delivers. Immediately upon stepping onto the lush, tropical resort islands of Banoi and Palanai (the settings of Dead Island and Riptide, respectively), it’s apparent how huge the graphical improvements are in these upgraded versions. Techland developed both games using their latest, proprietary Chrome Engine 6, the same 3D game engine that powered last year’s visually stunning Dying Light. With these being remastered editions of games that released in 2011 (Dead Island) and 2013 (Riptide), expect to see a few lingering rough edges, but overall this is a huge visual step forward for the franchise. 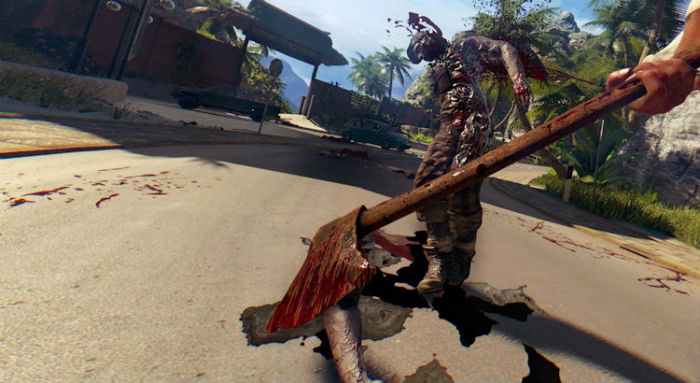 On the technical side, graphical updates include a new photorealistic lighting system, crisper images via improved anti-aliasing, more realistic shading techniques, enhanced character models, and brand new motion blur effects for a more cinematic feel to the game experience. All of these advancements result in a much cleaner, sharper, and more vibrant presentation for both games—easily living up to the title’s “definitive” moniker.

For me, the superior lighting effects were the most noticeable change, illuminating the resort islands with renewed luster and making the dense, tropical greenery pop even more. The lighting is perhaps at its most gorgeous moment though when you exit dimly lit buildings and get struck with a brilliant, blinding flash of sunlight reflecting off the island paradises’ smooth, sandy beaches. As well, I really enjoyed the new motion blur effects that occur when running, which amplifies the feeling that you’re moving extremely fast, and also heightens the fear quotient during moments of frantic zombie-fleeing panic. 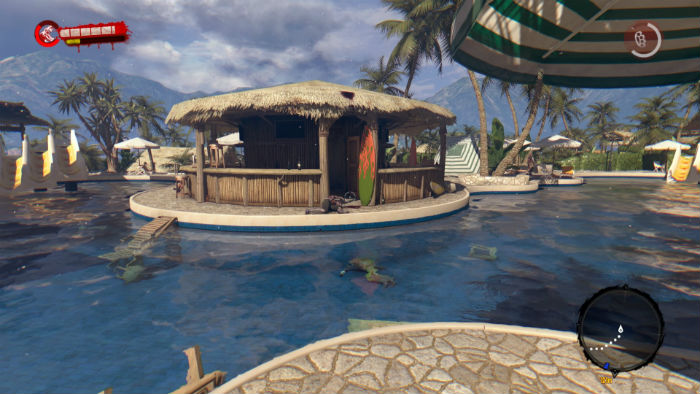 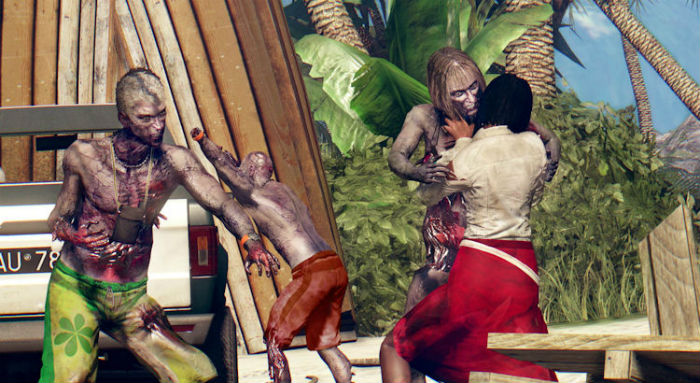 A craftable weapon system that nails it

The deep, fun to explore weapon crafting system is back in Dead Island and Riptide, this time bolstered b 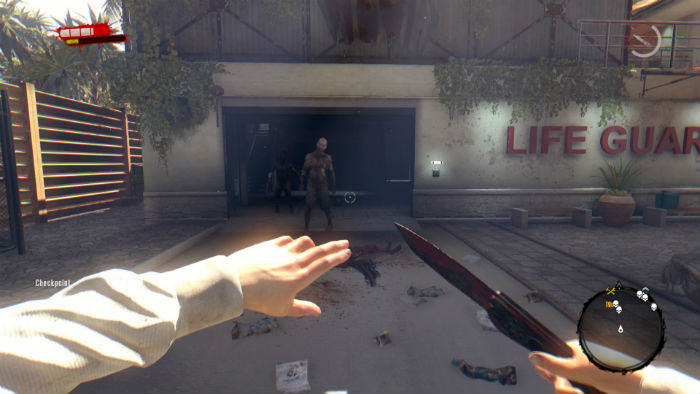 y a slew of DLC weapon mods and all-new weapon blueprints. In both games you’ll start out with access to weak, fragile weapons like rowing paddles or broom sticks, but in no time flat you’ll be acquiring stronger weapons like baseball bats, kitchen knives, hammers, and later on, firearms. By finding workbenches you can spend money to upgrade weapons, increasing their damage per second, durability, and more, or by discovering blueprints you can craft all kinds of nasty tools to send zombies back to the grave. 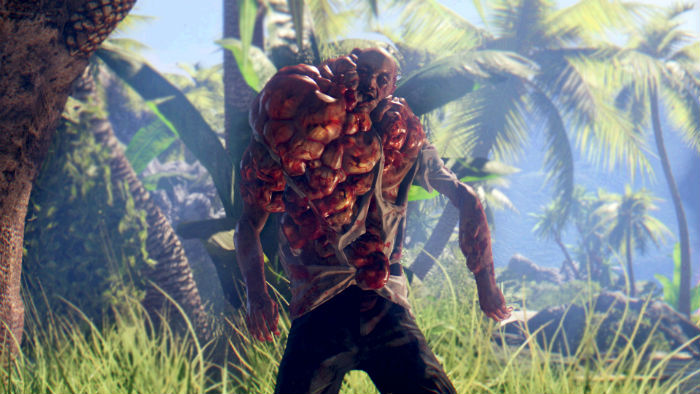 Some of my favourite craftable weapon mods include the classic baseball with nails (Nail’d Mod), the flaming hot machete (Hot Rod Mod), and the awesome baseball bat and buzz saw combo (Ripper Mod) that was previously a pre-order exclusive and is included in the Definitive Collection. Most mods imbue weapons with special properties, like adding a sizzling electric current to a blade or covering your police baton with fire, giving you fun, devastating new ways to fry, burn, or smash the undead to a pulp.

As fun as the weapon mod system is, it’s disappointing that Techland hasn’t improved the combat mechanics, which still comes off as awkward and underdeveloped. It’s tough to gauge the exact distance you need to be to hit incoming zombies with your weapons, so the default tactic always boils down to kicking your attackers to momentarily stun them, then rush in for the beat down. Using this same maneuver for hours on end gets repetitive, with the only saving grace being how enticing it is to butcher zombies in new and novel ways using your ever expanding repertoire of weapons. If you’re in the mood for some serious fun, make sure to flick on “One Punch Mode,” a silly and amusing formerly PC-only modification that sends enemies flying from a single punch, now officially part of the game. 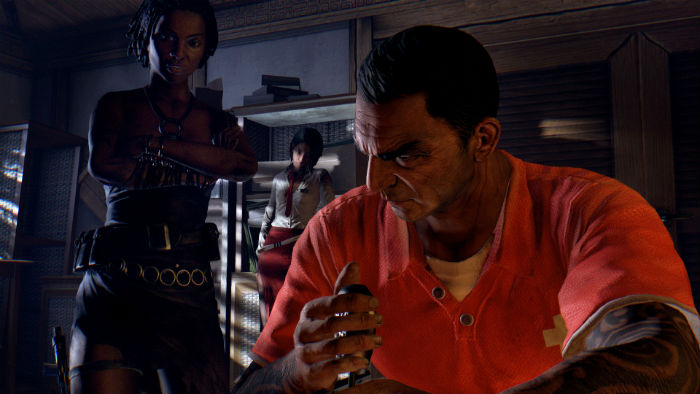 Increasing your survival odds with friends

Online 4-player co-operative returns in Dead Island: Definitive Collection, letting you play with your friends or players from around the world, over Xbox Live or PlayStation Network. Playing both Dead Island games with other people is definitely more fun, so if you have friends also picking up the Definitive Collection, you’ll want to find out what platform they’re getting it for. When your friends are unavailable, don’t worry—from my experience online, there are enough players logged in to always find a game to join.

PS4 gamers may also be happy to know that Dead Island and Riptide are also compatible with PS Vita Remote-Play and Share-Play, and both platforms support game streaming and recording. Another subtle, but welcome change is the harmonization of the user interfaces, providing a more consistent look between Dead Island and Riptide, and allowing for a seamless transition between each game experience. 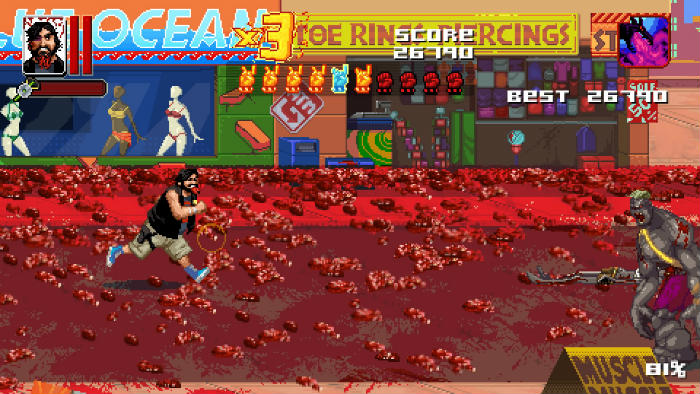 To sweeten the pot ever further, Deep Silver has included a third, all-new video game on disc called Dead Island: Retro Revenge. This 16-bit inspired side-scrolling beat ‘em up is set in the Dead Island universe (California, to be exact) and stars a Jack Black wannabe named Max out to exact revenge on kidnappers who stole his beloved cat. Unlike traditional games in the genre, Retro Rampage forces your character to continuously run forward, and as you do so, you need to switch between three different lanes. The neat thing about this game is that it essentially plays like a music rhythm game (think Guitar Hero), requiring you to use the right attack from four possible options, and shift tracks as required, while the level automatically moves forward. Retro Rampage is a surprisingly addictive bonus in the collection, despite its rather monotonous level design. 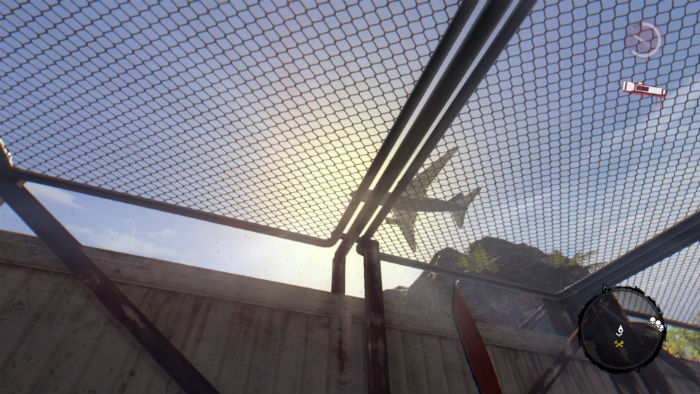 No bones about it, Dead Island: Definitive Collection contains the greatest versions of Dead Island and Dead Island: Riptide on the market. If you love action role-playing games and haven’t played these games, then no question, you should definitely pick this collection up. If you have enjoyed these games in the past, the inclusion of all the previously released DLC and vastly improved graphics is certainly very tempting. This summer, instead of taking a vacation in a lush, tropical island resort, I think I’ll be spending a lot of my time in Techland’s virtual, zombie-infested version.

+ Includes all the DLC

Get Dead Island: Definitive Collection for Xbox One