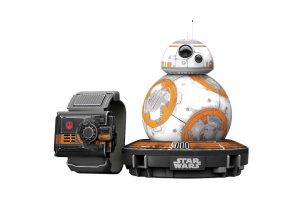 Step right up and witness the amazing power of the Force! With the Sphero BB-8 App-Enabled Droid with Star Wars Force Band, the power is all yours! (Note that BB-8 is not the same as last year’s version, and also that the Force Band itself is an all new Sphero accessory that allows users to control their BB-8 via gesture based commands.) 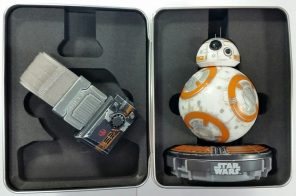 The BB-8 App-Enabled Droid with Star Wars Force Band mixes existing Sphero technology with an all-new concept that enhances the user’s ability to control, and thus interact with, the original toy. The droid itself first appeared in 2015 to coincide with the massive hit film, Star Wars: The Force Awakens. What’s new this time around is BB-8’s colour scheme and the seemingly magical Force Band device, which allows you to control your BB unit purely through “Force” gestures. BB-8 itself features a “dirty” colour deco, with mud (or possibly sand?) showing up in various places all over the droid (evidently BB-8 has recently been rolling around in the mud). When paired with the wrist-worn Force Band device, new control options such as Force Push, Force Pull, & Drive are opened up, and all it takes is a simple flick of the wrist to send your BB-8 in whatever direction you wish. It’s a very cool concept that Sphero has pulled off brilliantly. 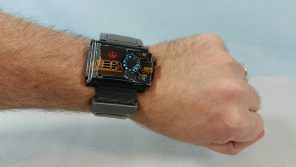 The Force Band device itself is super light and feels a whole lot like a wrist watch on the arm. Both the Force Band and BB-8 require charging before play, and each comes with its own USB charging cord, though BB-8’s cord plugs into an inductive charging cradle that you then place BB-8 into for charging (see photo in image gallery below). Both units charge within a fairly short time, though the Force Band itself seems to be the quickest. BB-8 is meant to take about 3 hours to charge, but the Force Band was ready to go in less than an hour, and even BB-8 was fully charged well ahead of the 3 hour projected time. In any case, it’s not a long time to wait before you can begin enjoying your brand new BB unit, and the droid itself should provide about an hour’s play time on a full tank of fuel.

The Force Band device itself works via Bluetooth to transmit signals to BB-8 that communicate your movements to the droid. These movements in turn direct BB-8 where to go. For instance, you can use a Force Push to make BB-8 move away from you, or a Force Pull to make BB-8 come toward you. There’s also a Drive Mode in which you can make BB-8 go just about anywhere by moving your arm all around. It’s a fairly innovative, and truly neat, system. Unfortunately, I had a bit of trouble getting my BB-8 to cooperate with me, so I’m not sure if the system is a bit buggy or if I simply don’t have much Jedi prowess. The connection was definitely there, but my BB-8 would run a little wild most of the time. Possibly my unit was just demonstrating a stubborn streak… You just never know with droids! Still, it’s a lot of fun to try and make BB-8 obey, and overall I’m pretty impressed at Sphero’s ingenuity. 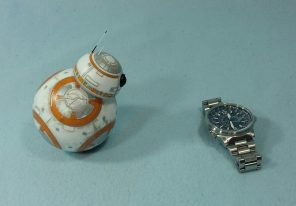 The BB-8 pack-in has all of the same abilities as last year’s clean version, including a cool “Patrol Mode” wherein he/she independently explores your home & sends back informative progress reports to the app. For example, BB-8 can send you a tracking report in the form of a graph that shows his/her recent whereabouts (i.e., recent path of travel). BB-8 also features special lights & sounds, as well as a number of cute personality traits. For instance, when you select the appropriate icons within the app, BB-8 can do things like nod its head for “yes” or even say an emphatic “No, no, no.” The extremely cool hologram projection gimmick is also fully intact, so you can record an important message that BB-8 will then play back on a loop. Alternatively, you can play pre-existing messages from infamous Star Wars characters like C-3PO & Captain Phasma. Another new feature that I don’t remember from last year’s app is onme in which you can draw a path for BB-8 with your finget on your smart device’s screen, and BB-8 will then follow the path. It’s a really neat feature that I’ve been having lots of fun with. Finally, there’s a new app feature wherein BB-8 can watch Star Wars: The Force Awakens with you and react to what’s happening on the screen. I couldn’t test this one out as I don’t have the film on DVD yet, but it certainly sounds like fun! All up, this year’s BB-8 is every bit as cool as last year’s version!

Please take a look at my brief video overview of the BB-8 App-Enabled Droid & Force Band: 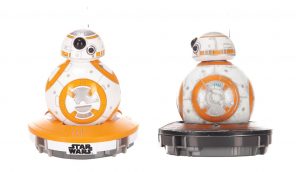 I loved the original Sphero BB-8 App-Enabled Droid when I had the opportunity to review it last year, and I like the newly updated version nearly just as much! The outer shell feels somewhat different this time around, though I certainly can’t say if there’s a qualitative difference in the plastic used. This one feels a bit more dull to the touch, though, whereas last year’s model felt more glossy. However, the “dirty” colour scheme gives this year’s BB-8 an entirely new personality, and the plastic quality doesn’t feel poor by any means. Add to that the all-new Force Band enhancing the overall play value, and once again Sphero has a winner!

Of course, if you’ve already got last year’s version of BB-8 and do not wish to purchase another (though I suspect many Star Wars collectors will be all over this “variant”), you’ll be happy to learn that the Sphero Star Wars Force Band is also available separately. Similarly, the original Sphero BB-8 is also still around, and, as the Force Band is 100% backwards compatible, you’re fully capable of using it with either BB-8 variant (the 2 different versions are shown side-by-side above for comparison). With the next Star Wars film right around the corner, it’s almost time to get Star Wars fever all over again!! Enjoy your BB-8 & Force Band, and may the Force be with you!