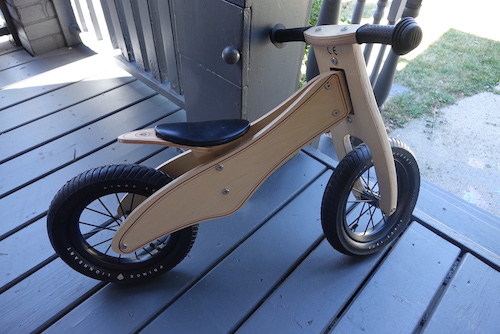 I found myself in the perfect position to try out the Prince Lionheart Balance Bike. Well, not me personally, but my son. Now 4, he has become quite comfortable on his bicycle with training wheels. So we’re approaching time to finally try him out on a two-wheeled bike. Naturally, however, he’s afraid. Needless to say, when he saw this bicycle arrive at the front door, he was intrigued.

Made of plantation-grown environmental renewable birch wood, this bicycle looks traditional, but also like a premium product. It looks like the kind of bike your grandparents might have had when they were kids, lovingly built by grandpa himself. While older kids like mine might not appreciate that more traditional design (where are the super hero logos or princess tassles?) it is great for toddlers who aren’t dead-set on that Spiderman or Frozen bike. 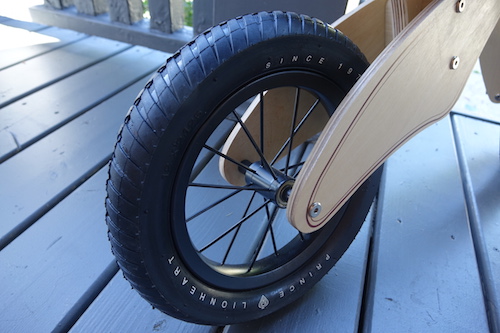 The rubber tires are clearly high quality. They’re strong and sturdy, and grip to the road or sidewalk to ensure a stable base for your child as he zooms along.

Also included are comfortable handlebars, and an adjustable seat. And, as is the premise of the balance bike, there are no pedals. Your child is meant to walk around, holding and rolling the bike upright as he steers with his hands, and pushes with his feet on the ground.

I’m not really one for putting things together unless they come with detailed, step-by-step instructions, including both words and pictures. So I had a bit of trouble in assembling this bicycle. The instructions leave much to be desired, and I was not able to find more detailed assembly instructions online. Even without the need for any additional tools.

While there aren’t many pieces: just the frame, tires, handlebars, and a few screws and bolts to put them together, plus two Allen keys, the photos were confusing. I couldn’t figure out which screws went where, and which piece needed to go on before another. 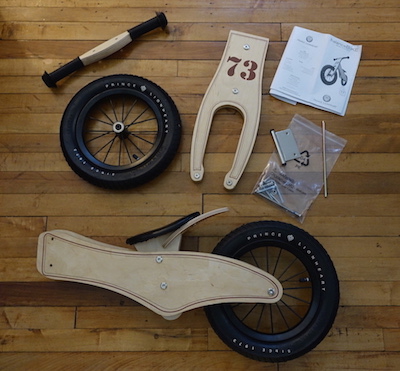 After some trial and error, however, and a bit of help from my significant other, I was able to figure it out. That said, for someone better versed in simple product assemblies, setup should be a breeze. Still, it could save the less handy a ton of frustration if the instruction booklet added a legend for each screw and bolt, and more detailed step-by-step instructions on how to put it together.

Once the bike was set up, however, it was smooth sailing. You can adjust the seat from a minimum 14” up to 16” by removing the four screws and selecting from one of the three holed positions. At just under 40”, my son would fit best at the middle position to allow him to still keep his feet comfortably on the ground.

His first comment, after never having yet tried a two-wheeled bike, was that it was “too wobbly” for him. But once he got the hang of it, he quite enjoyed strolling along the sidewalk and balancing himself. I believe that with more time, he would have gotten more comfortable on it. But every child is, of course, different.

The idea of the bike is to help kids keeps their balance, steer better, and develop overall better coordination. Kids will hopefully gain greater confidence and independence before actually hopping onto a two-wheeled bike with pedals by using one like this.

Since my son already knows how to pedal, the idea of stepping onto a bike that didn’t have any seemed weird to him. This leads me to believe that the bicycle, which is meant for kids aged 2-5, would be better suited to younger kids who haven’t even yet tried a bike with training wheels, or mastered the concept of pedaling. Indeed, in our travels around the neighbourhood, we caught sight of a little boy, probably about 3, motoring along on a balance bike of his own. 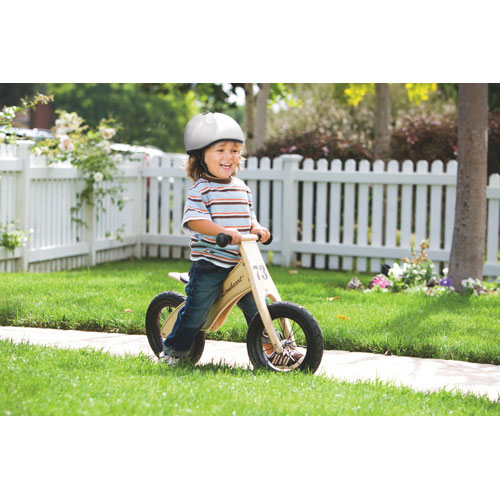 I’d highly suggest getting the optional bike stand. Since there are no training wheels nor brakes, the bike simply falls flat onto the ground when you’re not using it. For a standard bicycle with a metal frame, this might be OK. But one can’t help but feel that a bike made of such premium materials shouldn’t be thrown to the ground. You feel like you need to be more delicate with it even though you don’t.

That said, having the stand will also help kids learn to put it away neatly, versus plopping it down, or resting it against a wall. The bike is, however, relatively lightweight at under 10 lbs.

I’m still a bit sceptical as to whether it makes sense for kids to use a transition bike like this one, or just pop off those training wheels and go cold turkey. But it’s a matter of preference and personality for both the parents and the kids. It can be likened to the great Pull-Up debate: do you transition your child from diapers to Pull-Ups before going full-on underwear? Or skip the Pull-Up stage altogether?

Judging from my son’s reaction, I would introduce a bike like this early on, perhaps even before opting for a training bike. If your child seems ready, and is particularly active and into outdoor activities, he might take to this. And it could help him jump aboard a two-wheeled bike sooner than he would have without having used a balance bike to help boost his confidence and balance skills. But while balance is a key part of bike riding, keep in mind that learning to pedal is also a skill your child needs to master. And only a true, two-wheeled bike can do that.

Bottom line: it all depends on your child’s needs and desires, and your comfort level. But for parents looking for a classy-looking bike that can help their child learn to balance, develop good coordination, and get some practice before hopping onto a “big boy’s bike,” this may fit the bill.