It took a while, but Philips has finally extended its vaunted Hue line of smart lights outside of a home with the Philips Hue Smart LED Outdoor Light Strip.

For me, Philips’ indoor Light Strip is undeniably cool. The level of creativity you can apply wherever you install it is part of the appeal. Indeed, Philips has a lot of the inside of a home covered, given the variety of bulbs and lights in the lineup. Taking it outside has long been the one major omission—and Philips’ first attempt at an outdoor Light Strip is promising.

Like with most Hue lights, the Smart LED Outdoor Light Strip doesn’t come with a Hue Bridge included in the box. You can buy one separately if it’s your first foray into the product line, but if you have one already, the second part of the setup is very easy.

The Outdoor Light Strip comes in two distinct lengths: a 6.5-ft. (two metres) and 16.4-ft. (five metres) version. There’s no difference between them outside of the length disparity. I got to test the shorter of the two, which is not particularly long, as I soon realized.

Unlike the indoor strip, this one is thicker with a more translucent plastic cover clearly designed to withstand the elements. Philips says the Outdoor Light Strip can handle temperatures ranging from –20 to 45 degrees Celsius. It also has an IP67 rating for water-resistance, but I highly recommend avoiding areas where puddles might form around it. Rain and snow shouldn’t affect it, but because it needs a constant power source, you need to really think about where to put it.

The LEDs inside are like other Hue products, with 16 million colours and a range of 740 to 900 lumens of brightness. Colour accuracy is what you would expect from a current Hue light, with vivid reds, greens, blues, oranges, and purples, plus warm and cool whites.

Whereas the indoor version sticks onto whatever surface you put it on, there’s nothing like that here. Philips includes U-shaped clip holders and plenty of screws in the box. The idea is to screw in the clips and then place the strip to hold it in place.

There are some things to consider when installing this. First, you need a weatherproof outdoor power outlet. The cable and power adapter for the strip are both quite long, so you do have some leeway with placement. Second, the screws will do fine with wood, but brick or concrete is another story. You can always substitute those for proper screws at a hardware store, but it’s something to bear in mind. Third, your home Wi-Fi needs to be strong enough for the Outdoor Light Strip to communicate with the Bridge.

Truthfully, there’s no real right or wrong way as far as how you lay the strip down. As long as you avoid it submerging in water, you should be fine. But I do wonder about colder temperatures. Canadian winters are harsher in some places than others, so going below –20 isn’t unusual. Whether the strip can handle routine frigid temperatures is hard for me to predict.

The software side of the equation is much easier. My Hue Bridge quickly found the Outdoor Strip, and within minutes, I had created a new “room” for it and started adjusting colours.

There is a real distinction here that I think is worth noting. You naturally have more flexibility and choice with a house, whereas a balcony or terrace in a building is more limiting. Condos and apartment buildings may also have rules about drilling holes, which makes the clips less useful in such scenarios.

I considered weatherproof double-sided tape as an alternative, but even then, it’s meant to be permanent and could leave residue after taking it off down the line. The clips have an advantage in that the strip itself isn’t stuck to anything. So, I thought maybe I could combine the two: use small pieces of the tape to stick the clips on and then put in the strip.

It’s something I would’ve attempted if I had the longer version. It felt like overkill for the shorter length I had to work with unless I wanted to put it above ground somewhere. Being in a condo, I opted to lay it flat along the edge, where my sliding door was. Though I did have to contend with some snaking at the tip, the effect was still nice.

I just wish I had the opportunity to do all this in the spring or summer. It’s too cold to sit outside and enjoy what the strip can do, but I imagine using the lights in a backyard with winter activity, like kids playing in the snow, would look really nice. In the summertime, however, I see a lot of benefits to playing around with different lighting combinations.

Doing more with the Outdoor Strip

Dig deep with any Hue light and you’ll find that the whole line is pretty prolific. For example, you can add the strip to a schedule so that it turns on or off based on your parameters. Use IFTTT, the popular automator app, to have the strip act on a trigger of some sort, like you arriving home, for instance.

I also mentioned these apps in other Hue reviews, but Ambee, OnScreen, and ThorLight are three of the best third-party ones available. If you want some dynamism in the strip, those are worth checking out.

Then there’s Alexa and Google Home. By adding the strip to a Routine in the Alexa App, it can be part of whatever lighting setup you’ve created. With either platform, you can control the strip by voice, too. The same goes for iOS users who use Siri.

Choosing a length is important because the Outdoor Strip doesn’t work with extensions like the indoor one does. There is an extension cord for the power supply, but not the light strip itself. The longer length definitely offers some interesting options on what you can do. Light a path or illuminate a deck. Snake it around a patio area, or line a railing. No matter what you do, the ambient effect will probably look good.

If you’ve already used the indoor light strip, then you know what the effect can look like. With more Hue products working outside, LED lighting for your home can now literally flow out from inside. Combining the two, especially in summer months when entertaining people, is always fun, too.

I would advise thinking over where you could put it and taking some measurements beforehand. You want to be sure you get it right the first time. 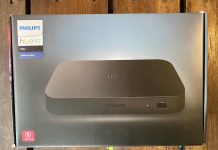 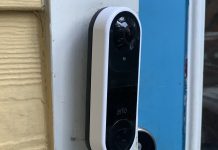 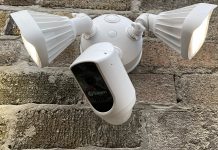