I’ve been using Philips Hue smart lights for 5 years, and I love them just as much now as I did when I first set them up. I have them in my kitchen, living room, and out on my front porch, and they always provide bright, white light, or a range of beautiful colours when I turn them on. The only thing I regret is that I have only been controlling them via the Hue App on my phone. After using the Lutron Aurora Smart Bulb Dimmer Switch, I wish I had installed a smart bulb dimmer switch a lot sooner.

Lutron Aurora Smart Bulb Dimmer is available for paddle switches and toggle switches. It’s an easy installation, it pairs with your Hue bulbs instantly, and you’re ready to dim or turn your Hue lights off and on.

The Lutron Aurora Smart Bulb Dimmer is the same size as any standard light switch cover. This dimmer switch is available for paddle (rocker) switches and toggle switches, so there is a type for every home.

When you press it three times, the light inside the dimmer knob will start to pulse, your Hue App will locate it, and it will be added to your account. At that point, you choose which Hue lights you will control with it. The dimmer switch should be working, and to test it you can toggle it off and on while it’s still in your hand.

If you want to mount the dimmer switch over an existing switch, you’ll need to disconnect the wiring to your existing switch. That means turning off your power, disconnecting the wires to the light switch, and using a twist on wire-connector to safely close off the connections inside your switch.

Once that’s done, you place the base of the Lutron Aurora Smart Bulb Dimmer over the switch and attach it with the included screws. Lock the grey mount over the switch first, and then add the dimmer knob. Everything should be up and running seamlessly, and you can control your Hue lights via the switch.

Do you need to mount Lutron Aurora Smart Bulb Dimmer over a switch?

Mounting your Lutron Aurora Smart Bulb Dimmer over an existing switch reduces wall clutter and gives you a seamless look, but you don’t have to mount it over a switch at all. As long as your Hue lights are turned on and you pair the dimmer switch with your Hue App, you can put the switch anywhere on your wall.

The only thing to keep in mind is unless you know someone won’t turn off the existing switch to your smart lights, mounting the switch elsewhere still leaves you open for someone to turn off the power to them. If you aren’t going to mount over an existing switch, you’ll need to make sure your lights are always turned on.

I know it’s not difficult to pull out your phone to control your lights. I also use the scheduling and rules in the Hue App, but I really love having the Lutron Aurora Smart Bulb Dimmer Switch right on the wall. It takes control of the lights so easily.

I never experienced lag in my connection to the lights. They instantly turned on and off, and the dimmer was a nice, gradual dim and brighten. The switch is versatile, so you can add one set of lights or all of your lights. It can control 50 Philips Hue bulbs connected to a Philips Hue Bridge. If you have lights that aren’t connected to a bridge, it can control up to 12.

If you have Philips Hue Colour Smart Lights, you can assign a different scene or colour to your Lutron Aurora and it will turn off and on when you tap or dim your lights.

Having the switch on your wall will also prevent someone from cutting power to your lights, and that’s a solution to a real problem I’ve always had with my lights. Someone will flip the switch off so that the lights are no longer accessible, and until I get home and switch it back on, I can’t use my lights.

There have been so many times I’ve been out and wanted to turn a light on for my dogs. I open the Hue App, and the lights aren’t accessible, so I know someone switched them off. With the Lutron Aurora Smart Bulb Dimmer Switch, I don’t have to worry about that.

Lutron Aurora Smart Bulb Dimmer works with your Google Assistant or Alexa. You can add it to the Google Home App, and it should appear under your devices. Once it’s there, you can just say “OK Google, dim my kitchen lights.”

Should you choose the Lutron Aurora Smart Bulb Dimmer Switch?

Smart lights are great on their own, but it’s really nice to have a permanent switch on the wall to connect to them. The Lutron Aurora gives you easy access to turning them off and on, easy dimming, and your lights will always be on. If you have toggle switches in your house, it’s a 2-minute install and you’re ready to go.

The only downside for me is how you have to disconnect the wiring in the existing switch to install the rocker switch over the panel. I’m good with wiring, so I didn’t mind doing it, but someone else might feel like the install suddenly become complicated. It really isn’t, and you get to use the existing switch for a seamless install. 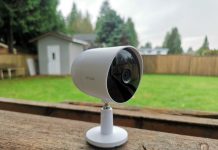 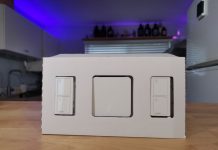 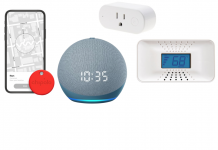