In my decade reviewing tech gadgets, I’ve seen a lot. So much so that I’m rarely impressed. Still, every once in a while, a new tech product comes out that catches my attention. In the world of TV and Home Theatre, that product just arrived: it’s the Samsung Freestyle smart portable projector. It’s a swiss army knife of an entertainment device—portable projector, smart speaker, and ambient lighting device in one.

Virtually any flat surface becomes an HD screen. It has Smart TV features built-in, responds to voice commands, and can produce a 1080p screen up to 100” diagonally. When not in use, it turns into a mood light. In short, this device reimagines how, where, and when we view content. Before we dive deep into the features and use-cases for the Freestyle, let’s take a close look at the design. Design of the Samsung Freestyle

The first thing you notice about the Freestyle is how incredibly compact and portable it is. The dimensions are approximately 4”x6”x4” (WHD) and it weighs only 830 grams. The Freestyle itself sits in this cradle that can be rotated up to 180 degrees. It can project on walls, ceilings, and even floors. In other words, by adjusting the angle of the Freestyle, virtually any flat surface becomes a projector screen. Let that sink in. Better yet, watch my video review to see it in action.

On the front, the projector lens sits squarely in the center. It is incredibly small, about the size of a fingertip. On each side are what looks to be sensors that auto-adjust the keystone, level, and focus. Above it are touch controls for the power and volume buttons. There is also a pairing button for a phone and the remote.  On the side is the USB-C charging port, micro HDMI, and a mic-off switch. Like most smart speakers, this is to disable the microphone for voice commands.

Included with the Freestyle is a translucent lens cap. This does more than just protect the lens. It provides mood lighting when not in use. Also included is a remote control with dedicated buttons for Netflix, Amazon Video Prime, Disney+, and Samsung TV. The Samsung Freestyle is also a 360-degree speaker

If most people saw it from the side, they would likely assume it’s a speaker in a cradle. They would be right. In addition to being a smart projector, the Freestyle is also a 360-degree speaker. A speaker grille is located around the top and bottom that delivers sound in all directions. A 5-watt woofer on the back provides powerful bass for a well-balanced sound profile.

Users do get the option to connect an external Bluetooth speaker to the Freestyle. This is great for Bluetooth sound bars or surround sound systems that support Bluetooth connectivity. Either way, I think a lot of people will be happy with the internal speaker. I was certainly impressed and I’m an audio nerd.

Connectivity options for the the Samsung Freestyle

Samsung is well known for its televisions. The Freestyle comes with Samsung’s Smart TV operating system built-in allowing mirroring and casting. It’s compatible with both Android and iOS mobile devices. Imagine casting content from your smartphone to the wall. That’s actually a thing now!

It’s also the first projector to include far-field voice control for hands-free control. It’s never been easier to watch content wherever you want and find it via voice. Actually, I take that back. It could be better. I have some ideas below.

The Freestlye can also be connected to gaming consoles and other devices like laptops that support HDMI. However, it connects with micro HDMI and I doubt most people have that. You may need to purchase an HDMI to micro-HDMI cable if you don’t already have one. Setting up the Samsung Freestyle

Getting the Freestyle up and running was incredibly easy. After turning it on, I watched in amazement as it auto-adjusted the keystone, level, and focus. It then presented a giant QR code on the screen. As one does, I scanned it on my smartphone. It directed me to download the SmartThings app. From there, I entered pin codes shown on the screen and added my Wi-Fi network. Users also get to choose their preferred voice assistant. The choices were between Bixby and Amazon Alexa. Sadly, Google Assistant was not an option. Expect a little rant about that later.

From here users have the option of linking accounts such as Netflix and Spotify to the projector. After doing this once, you’ll have instant access to it every time you turn it on. The entire setup took between 5-10 minutes. It’s incredibly simple, a kid could set it up. In fact, I think many will do just that. The Freestyle uses LED display technology to deliver 1080p HD resolution. The potential screen size is 30” to a whopping 100”. That is an incredible range. It has 230 lumens of white brightness and 230 lumens of colour brightness. This tells you that it’s ideally suited for darker environments. The smaller the screen size, the brighter the image. The colour temperature can also be adjusted to suit the viewer’s preference.

The big thing to remember is that it auto-adjusts the screen size, keystone, and focus. If you’ve used a projector before, you know this is usually done by turning knobs and dials. Not with the Samsung Freestyle. Point it to a wall, turn it on, and bam! You got a screen that’s level and in focus. Normally I do projector reviews in my high-tech, smart-home, themed Airbnb suite. However, it’s booked solid so I took it to my parent’s house. Growing up, my brother and I had our own Entertainment room. Now, it’s become my mom’s new room which I recently painted.

It’s a big room with large walls and no TV. Buying and installing one has been on my to-do list. I tested the Freestyle on all the walls at night. All I can say is, wow. Within seconds, it auto-adjusts and a massive projector screen is now on the wall. With dim light, the colour is bright and the 360-degree built-in speaker fills the room.

There is one big wall in this room and I was absolutely blown away by both the size and image quality. Kids are going to lose themselves. I’m actually dumbfounded that something this small could produce an image that large. What a time to be alive. Tips and tricks for using the Samsung Freestyle

There’s a couple of tips I want to recommend. This is to ensure you get the most out of the Samsung Freestyle.

My sources tell me that there will also be an optional travel pack. If and when that comes out, get it. Take this with you wherever you go. Vacation, a friend’s birthday, take it everywhere. The travel pack will ensure it’s protected no matter where you take it. Final thoughts on the Freestyle by Samsung

The Freestyle is ushering in a new way to consume content. Got Wi-Fi and a wall? Any surface instantly becomes a screen. If my gut intuition is right, this product will be embraced by young people. They will take this everywhere.

The missing piece is native Google Assistant voice integration. Samsung has yet to give up on Bixby. The fact is, most Samsung users don’t use Bixby, they use Google or Alexa. In the YouTube app, using voice search requires a lot of unnecessary steps. I tried teaching my mom, but it was too many steps for her. Make it easier Samsung!

Whatever the case, the debate between televisions and projectors is getting really interesting. I’m convinced this product will completely disrupt the TV and projector industry. Home entertainment will never be the same. Everyone and anyone can have a huge screen virtually anywhere they have Wi-Fi. Again, let that sink in.

After showing this to my mom in her new entertainment room, she no longer wants a TV. She wants the Samsung Freestyle smart portable projector. After watching my video review, it’s hard to blame her. Seeing is believing! 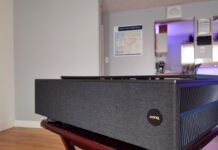 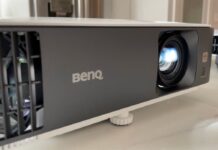