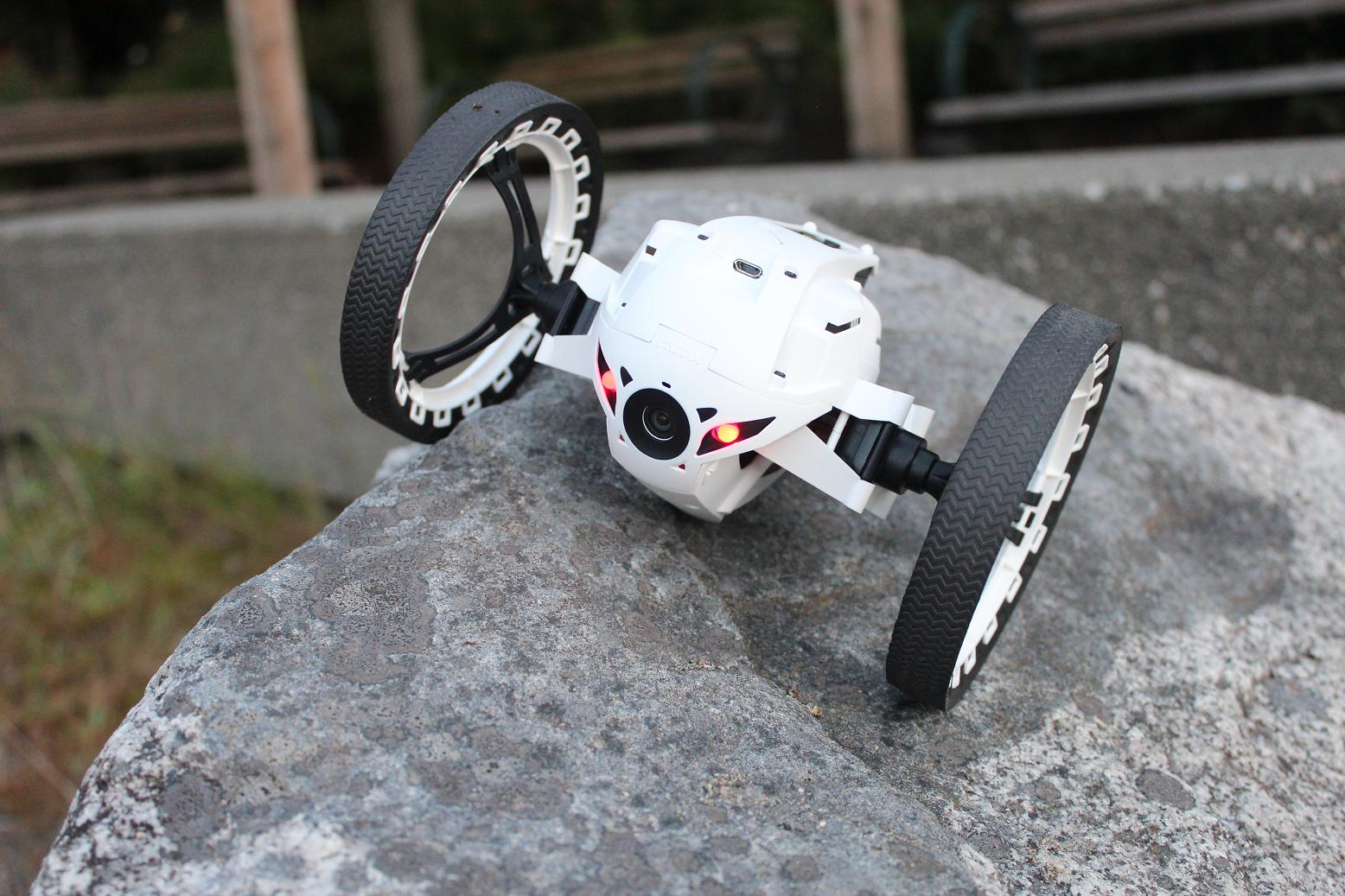 Remote control toys nowadays are way more sophisticated than the ones I used to play with, that’s for sure.  No longer do the toys have to be so big that they can house the number of disposable batteries you need to run them at minimum. I remember having a monster truck as a kid that took 6 D Batteries for the car and 3 C Batteries for the remote. In return, you DID get a few hours of playtime out of it, but it still wasn’t all that great for the investment (we were talking about $10-15 worth of batteries per shot.)

Nowadays, we’ve got rechargeable lithium-ion type batteries and remotes are way smaller, or have been replaced altogether by our smartphones.  Such is the case with Parrot’s two newest minidrones, available at Best Buy for reasonable prices considering everything it can output. We’ll be looking at the second one shortly, but today we’re looking at the Parrot Jumping Sumo, a small drone with big foam wheels and a curious sense of exploration. A camera is housed on board to take pictures or videos of the action, which store locally to a micro USB card (not included.) The Sumo also emotes its current state with you through noises and its own on-board actions, and can do stunts at the push of a button.  It wouldn’t be a “jumping” sumo without the ability to jump.  This it does with a quick windup. It can jump upwards of 80 cm. 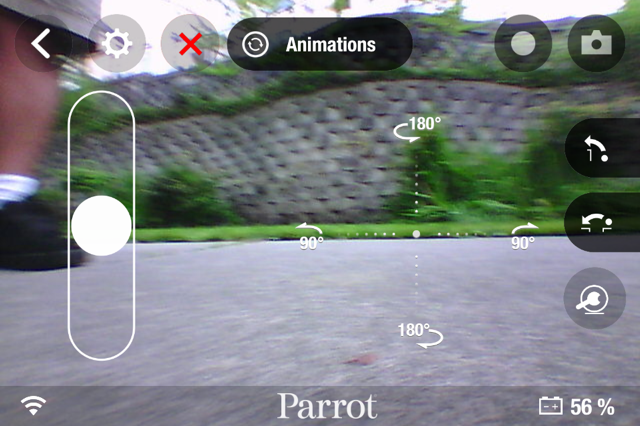 One of the things I’ve never been a fan of with these “smarter” vehicles is the fact that the battery life is terrible. There are vehicles out there that require you to charge literally for hours in order to get a 10-15 minute battery life in return. The Parrot Jumping Sumo’s battery life is 20 minutes, which doesn’t sound great on paper until you realize it only takes 40 minutes to charge. At a 2:1 ratio, it’s probably one of the most efficient out there.

Setting the Sumo is up pretty easy.  You go download the “Freeflight 3” app from your applicable App Store (note: iPhone users have to have the latest version of iOS installed.) From there, slot in the battery on the unit and charge it. The directions tell you to hook it up and charge it from your computer, but it’s your standard USB to mini USB connection, so you can even just plug it into a wall charger if need be if you have, say, a Samsung Galaxy phone.

Once you get everything going in that regard, the fun begins. Have you smartphone find the local wifi signal the drone emits, and connect to it through the app.  You can also upload the latest firmware updates to it this way as well.  It should be noted here that you’re going to be connected to the drone, it takes your Wifi signal while you’re connected to it, so if you’re trying to access the internet off your phone while playing with it, you’re using your data.
I had trouble getting the Sumo to configure with my phone, and it took numerous attempts before it finally did connect, which I assume is directly due to the number of competing WiFi devices and signals I have in our home (it was a bit easier outside.)

Once it does connect, the whole system is pretty straight forward. You have a virtual forward/backwards command off your app, and you steer by tilting your phone. You will also see numerous other commands, like the ability to turn the drone 90 degrees or 180 degrees.  The drone basically does this on the fly and turns on a dime when you ask it to.  It also has a fair few “stunts” built in that you can utilize while it goes.  You can have it spin in circles, or tilt, or do some odd combinations of things.  Then there’s the jumping.  Jumping is also done with a push of the button off the app.  You simply tell it to jump and it cocks itself into position and jumps with a loud shot. It was a fair bit louder than I was expecting, I admit, and it scared my cat into oblivion when I tested it indoors.  Either way, this is pretty easy to use.  The tilted motion steering is a bit sensitive, but you’ll get used to it.  Just keep in mind that the Sumo doesn’t transmit its pictures and video to your smartphone.  While the app allows you to take pictures and record video from there, you have to have installed your own Micro USB in the vehicle for the latter to occur. There’s a bit of internal memory available for you to capture images though.
I did find this all a bit odd though considering it’s taking up your WiFi spot, so you’d think there’d be the possibility to wirelessly send back the images and videos to the phone.  Maybe that’ll be a future firmware update because that would make things a lot easier! 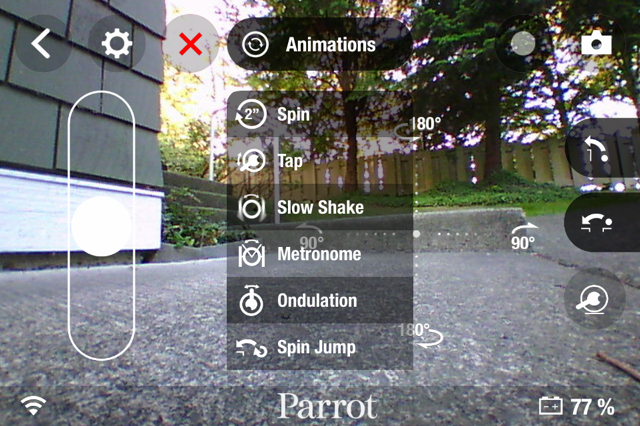 The Jumping Sumo seems to be the kind of vehicle that would be up to snuff and perfectly capable of traversing all sorts of terrains outside. With a camera onboard, and very simple recording abilities, you’d think it would be the perfect little outdoor vehicle.  I guess to a certain point, it is.  It’s pretty easy to get going, easy enough to steer and easy to maneuver. The trouble is, it’s not all-terrain. Since the wheels are made of that soft foam and the treads are basically for show, it doesn’t like anything but hard surfaces.  If you accidently drive the Jumping Sumo into the grass, you’ve got to go get it unless you somehow can jump back onto the pavement, which is another issue I had.

The Parrot Jumping Sumo lives up to its name.  It jumps like nobody’s business after it rears up and launches itself. The landing isn’t the most graceful, however. In fact, I damaged the undercarriage of the review model landing it on the pavement outside. That was the other reason I questioned whether it was really good for the outdoors.  It’d be tough to find a body type that wouldn’t get scuffed up sooner or later, but I was surprised at how easily it got scratched and dinged.  Here’s a picture of the damage.  I stopped jumping it outside after this.  If you end up breaking something this way, it’s not a big deal.  Parrot has replacement parts available which you can search for right from the app itself.

I guess one of the oddest things for me is that I don’t quite understand what the ideal terrain for the Jumping Sumo is. It doesn’t seem like an indoor vehicle to me since it needs a fair bit of space to get up to speed and traverse the landscape (and taking pictures and videos of the Sumo rolling around your dog and bedroom aren’t really exciting) but it’s tough to fathom it as an outdoor vehicle too, given the issues I mentioned above.

But that aside, it’s still fun to play with, and its a steal when you consider its recording capabilities. You’d usually expect to pay as much for something like this without a camera, let alone one that can do it the way the Parrot Jumping Sumo does.

It’s a neat toy for sure.  You’ll find the Parrot Jumping Sumo at Best Buy

You can find many other great toys too, online at Best Buy