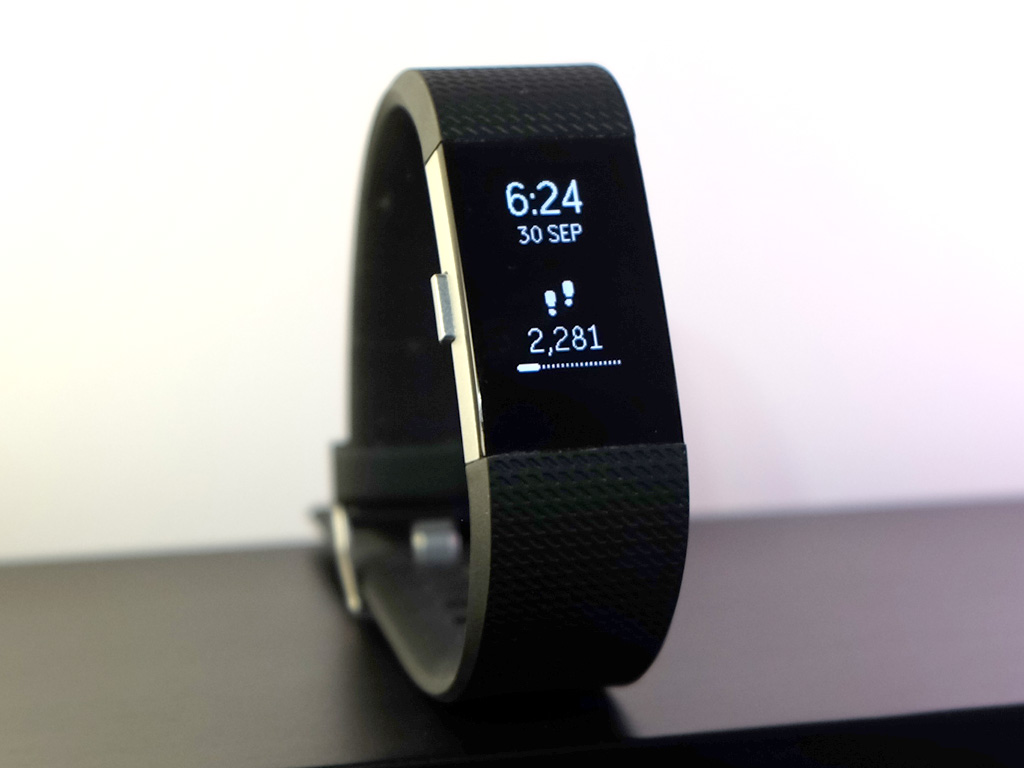 Fitness bands are a pretty personal product. Ask anyone who has one, and you will either get a rave review or a depressing story of feeling letdown by what the device promised. Fitbit has emerged as a category leader in this area, and what it does can set the tone for others, which in turn, sets the bar higher for the Charge 2.

Fitbit is off to a good start with it for a number of reasons that I will get to, but the primary one is because it is effectively a combination of previous Fitbit models, particularly the Charge and Charge HR. With some extra functionality that is somewhat similar to the Blaze, the Charge 2 feels like a band that strikes the right chords. 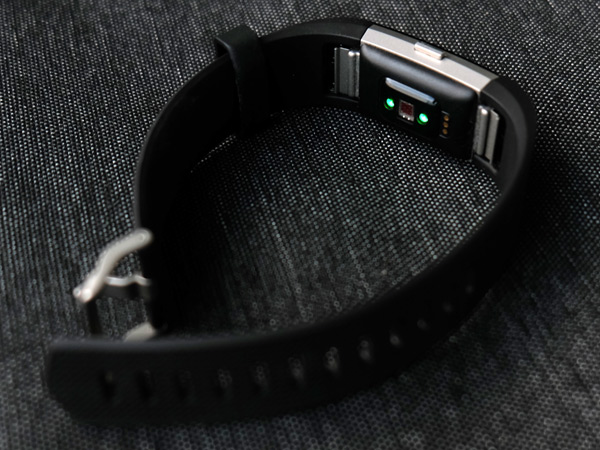 The rubberized band has a slightly different aesthetic, but basically feels the same. I was comfortable with the previous one in the Charge HR, and felt no major step forward with the Charge 2 in that regard. The same clasp was also brought back with a very minor design change. If it’s not broken, don’t fix it, as they say.

With a heart rate monitor and 4x larger OLED touch-sensitive display (than the Charge HR), this band is more or less a merger of the previous two Charge bands. That gives the Charge 2 a thicker profile on the face, elevating it slightly — a tweak that may be unlikely to bother men, but could be an issue for women. It’s entirely subjective, mind you, so to each their own on that point.

Moving on, the silver trim along the sides is one of those small details that makes a bigger difference. It added a little extra flair to the black version I tested. There’s only one button on the side, and it needs to be used in tandem with the touchscreen to navigate the various menus and features the Charge 2 has. For example, pressing the button cycles through the different options, while tapping on an option then cycles through the choices within it.

Fitbit pops up hints and instructions at key points after first starting up the band, but they soon disappear after some usage, leading to trial and error in learning it all again. Without a back button and a larger display, I found I spent more time with the menus than I probably should have. It’s not so much that the interface is unintuitive, it’s that it takes time to learn and master it.

Motion-sensitivity is built-in so that the display would light up when raising or flicking one’s wrist, then turning off again once the arm fell. I found it useful for looking at the time or how many steps I had accumulated. The band vibrates for inactivity reminders and incoming calls or texts, making it an active device in that sense.

Pairing with the Fitbit app on iOS or Android is easy, and doesn’t take long. If a software update is needed, it’s a simple tap to push it over to the device. Keeping an eye on new updates is important because new and improved features could be rolled into them. 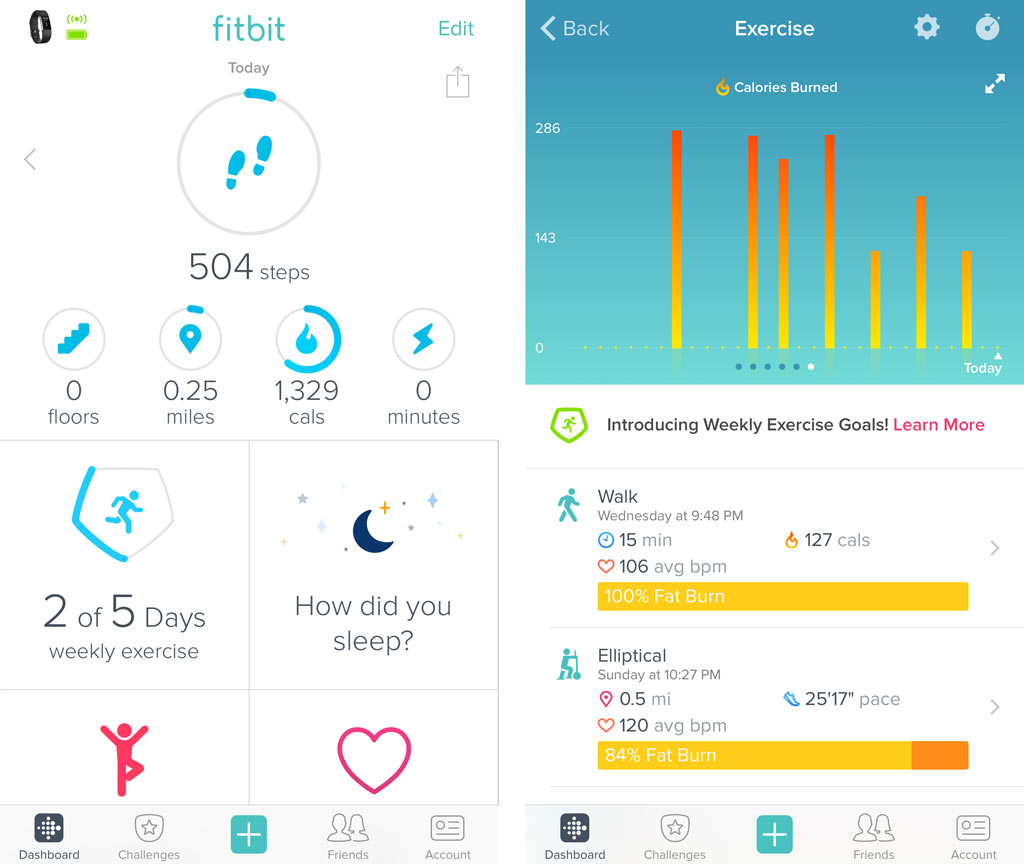 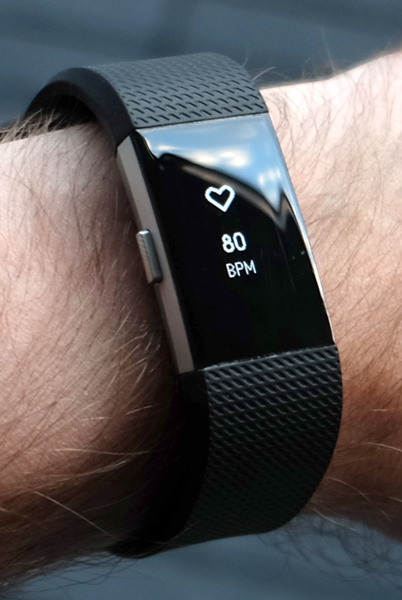 By incorporating SmartTrack into the band, Fitbit has tried to automate tracking certain activities based on movement. In theory, it’s supposed to recognize when you go running, cycling, walking or a few other activities, but I noticed it didn’t always happen. One time, I did 15 minutes each on the bike and elliptical, but it only recorded the later of the two. Had I been riding a bicycle with my phone in tow, it would have worked immediately because of distance tracking.

So, I generally started workouts manually by clicking the side button to the exercise menu, tapping until I saw bike or elliptical, holding down the side button to start the timer, and then holding it down again when I was done with the machine. At first, I found the process a little cumbersome, but over time, it became second nature. I just had to remember to stop the timer when I was finished. The stats shown after that are nicely laid out, though I could only see them once on the Charge 2’s display. Any second look would require opening the app.

Step tracking is good, albeit with a tendency to inflate the numbers a little. There were instances where I was sure I hadn’t walked in my home as much as the numbers indicated. It’s not a pervasive problem, so I don’t dock the Charge 2 much for that because this is something that affects many wearables. A pedometer is always going to be the best form of step-tracking in my opinion.

If tracking stair steps is important to you, I would caution that the Charge 2 — like other wearables — doesn’t notice them when the arm wearing the band isn’t lowered enough. I tested this by holding objects in front of me or a phone to my ear while going up and down stairs, and the results were mixed. It simply didn’t count all the steps I had taken, but again, I could understand that because wearable manufacturers still haven’t fully figured it out yet.

The band relies heavily on the GPS connection from the phone to measure distance and pace, while the heart rate monitor maintains a steady reading throughout the day to calculate an average. I found the readings to be fairly accurate, though I have yet to use a wrist wearable that can match a chest strap. Makes sense, given the strap is situated right in front of the heart and is less likely to move out of place, but at least the discrepancy isn’t ridiculous. What I saw on the Charge 2 gave me a good idea of how hard my heart was working at any given time.

The Charge 2 isn’t waterproof, so swimming is out of the question. It is pretty durable in fighting off sweat though, and I made a point of cleaning the band with rubbing alcohol to remove any latent bacteria that might fester in it. 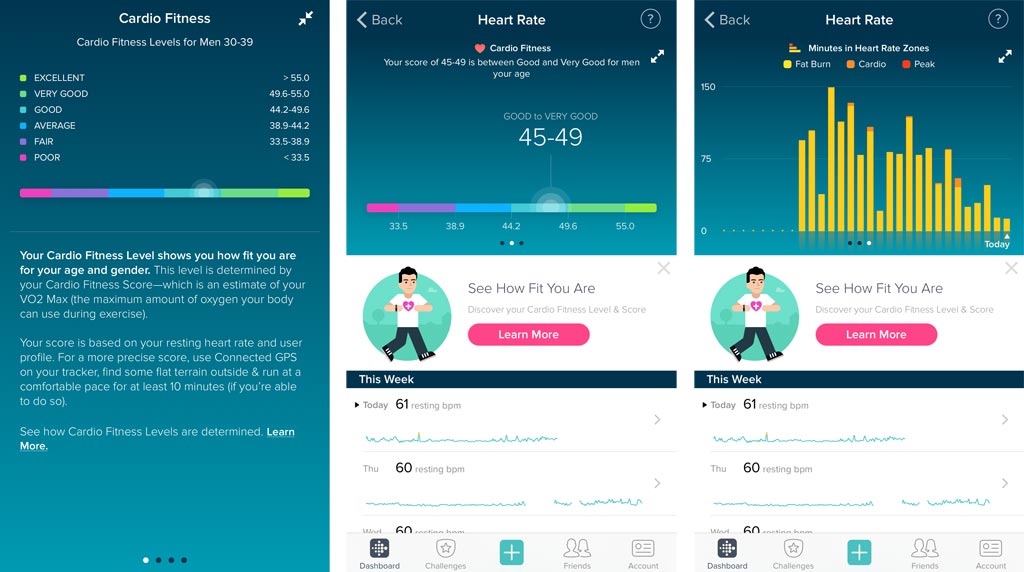 This deserves its own section because it’s not only new, but also tailored to a more hardcore user. It’s generally known as VO2 Max, the maximum amount of oxygen intake while pushing your body hardest. It’s a built-in feature found in the heart rate portion of the dashboard in the app, and kicks in by wearing the Charge 2 to sleep for a resting heart rate, matching it with your user profile to come up with an overall number. Going for a comfortable run (at least 10 minutes) with GPS will yield more precise results. I scored between 46-50, which is between good and very good.

To me, having this in the app helps complete the circle. The other metrics are certainly very helpful in establishing a sense of progress, but the Cardio Fitness Level establishes a precedent that’s hard to ignore. Hitting 10,000 steps a day is great, but being on the poor side of the cardio fitness spectrum puts things in perspective. Weight is a factor in that, and Fitbit wisely adds some useful information on how you can raise your score.

I liked the sleep tracking. The Charge 2 was fairly accurate at recognizing when I passed out and when I woke up, even noting short naps I might have taken during the day. I would get a star if I slept more than seven hours (of which I rarely do these days), giving me yet another visual reminder that I need to get some more shut-eye.

Relax is a breathing exercise that is also new to the band, and I personally found it useful. That may stem from my penchant for yoga, but in any case, it’s a two-minute exercise of taking deep breaths, following a circle that expands and retracts on the display. It’s a worthwhile thing to do during a stressful day or after a workout, and smart of Fitbit to include it.

Phone notifications are somewhat of a mixed bag, depending on how you look at it. I could see who was calling, but I couldn’t accept or reject the call. Same with incoming text messages, where there was no way to respond. Only part of the first line could be read, which was fine for very short messages confirming something, for example, but in most cases, I had to look to my phone to understand the context.

Calendar entries do show up, too, but not other apps. So, if I got a WhatsApp message along with a Twitter DM, I wouldn’t see either. Plus, notifications of any kind wouldn’t appear unless the phone was within Bluetooth range. Not a big deal, only clear that the Charge 2 isn’t going to show much on its own.

Fitbit rates the battery at between 5-7 days, and I would say that’s about right. Heavier daily usage will skew it down, along with all the incoming notifications. As with any device, the more you use its features, the less the battery lasts. At least charging it up again doesn’t take long.

The various features offered in the Fitbit Charge 2 place it in somewhat of an unusual distinction. It’s a fitness band that happens to do a few things you tend to see in a smartwatch, except it doesn’t straddle that line as much as the Samsung Gear Fit2 does.

It’s the kind of product fitness and health enthusiasts will find offers plenty, and if Fitbit’s ability to add more through subsequent updates can do more, then there’s a lot to like about what the Charge 2 can do. If you’re looking for more of a smartwatch experience a la Fitbit, I would recommend the Blaze. If a band is what you have in mind, this one is worth considering.

The Fitbit Charge 2 is available now in black, blue, plum and teal, and they each come in large or small.