Monster has became synonymous with high quality and high performance audio/video cables that revolutionized consumer audio products. The company has branched out with its SuperStar speaker offering great wireless sound in a compact design.

Have slim design will travel 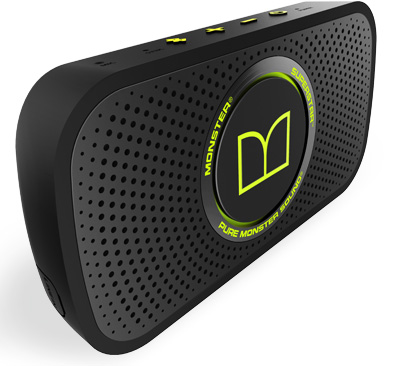 Billed as the “the world’s smallest audiophile Bluetooth speaker,” the SuperStar is small enough to fit into your pocket, purse or backpack. At 11.98 cm (4.72 in) long and 18 cm (7.09 in), the SuperStar is slightly larger than a smartphone. It’s relatively light at just under a kilogram (7.04 ounces) but thicker than a smartphone at 5 cm (1.97 in).

It’s covered with an IPX-4 rated splash resistant cover with built in buttons and a back cut out for the speaker. There is a front lip on the cover that clicks into the front groove for a tight fit. The cover is available in a variety of colours: Silver, blue, lime green, fuschia, burgundy and black.

The SuperStar top buttons are as streamlined as the unit itself. There are four controls on top; on the far left is the Bluetooth Sync button and on the far right is the power button with volume controls in the middle. The plus button increases the sound while the minus button decreases sound. There is no shuffling forward/back options for playing soundtracks – you’ll need to control this through your connected device. Monster did say you can play and pause your music using the Bluetooth button but I couldn’t get this option working. 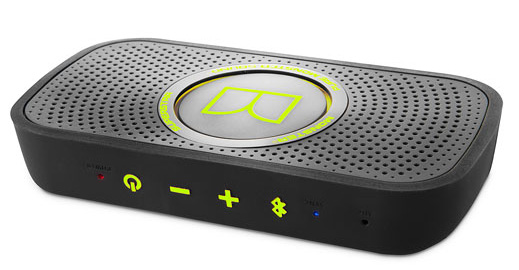 To start, the power button doesn’t kick in right away. I had to press it down for at least five seconds until the friendly computer voice says “Power on.” The pinhole Power Indicator LED light beside the power button lights up red.  A slow red flash indicates the SuperStar is charging while a fast flash indicates a low battery. A solid red light means the unit is fully charged. The Power Indicator LED also rapidly flashes red when the maximum or minimum volume has been reached.

Monster has fitted the SuperStar with its proprietary Pure Monster Sound technology that includes a two full-range drivers and two bass radiators (one on the front and one at the rear.) The sound was good with low to mid volume levels with some distorting at higher volumes particularly bass-heavy tracks. Acoustic tracks sounded the best while more electronic tracks started to get crunchy at higher volumes. I had some concerns over the back speaker with its soft touch material being not completely waterproof and perhaps pulling away from the speaker body too easily.

SuperStar has a slight tilt is in design so there is an angle when it stands up. It gives the best sound with standing upright due to the vibrating speaker at the back and while it still functions lying down, the sound is a muffled. Upright you get the best sound from the unit and this is directly connected to location of the bass radiators. 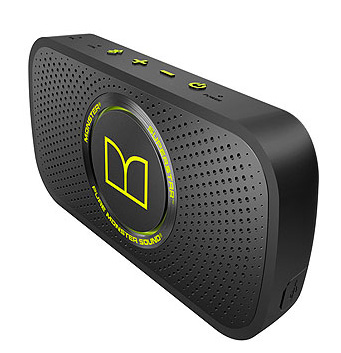 Bluetooth connectivity was also easy to set up. I started pairing it with my MacBook. Hold the Bluetooth button so the blue Sync LED started blinking indicating it’s in pairing mode. In less than three seconds I heard, “Your device is connected” and Monster SuperStar showed up in my computer’s Bluetooth listings.

When the Bluetooth LED indicator was a steady blue, it took less than two seconds for the sound started feeding through the Superstar speaker and it was LOUD. I figured out the default setting must be on maximum. While lowering the volume worked through the speaker itself, I found controlling the sound from the computer quicker and more effective. (Monster does recommend using your playback device when you are directly connected to playback via the USB cable.)

SuperStar promised a Bluetooth range of 9.14 metres (30 feet) and it did deliver as long as there was open space. The sound was clean and articulate. There was some signal distortion as I approached the 9.14 metre mark. The signal was lost between rooms but worked well on my terrace as long as the doors were left open and delivered great sound. If there is no Bluetooth available, you can use connect the SuperStar directly to your audio source using a stereo cable with male 3.5mm connection on both ends. (This cable is not included.) 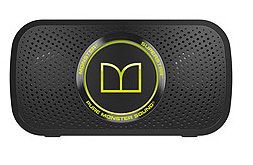 Connecting to my Smartphone was equally smooth. I paired the SuperStar easily to both my Xperia and iPhone with no issues, except I had to turn off Bluetooth in the device already connected. I found the sound not as crystal clear but it got the job done. During calls, it worked much better to control the volume through the SuperStar as the response time was quicker. The built-in mic does have advanced noise cancellation for clear wireless hands-free calling and conferencing. I tested the mic by calling my home phone and leaving on the answering service. There wasn’t any difference in the sound quality. Listening to the playback message from my phone there was some distortion.

You can’t have the SuperStar connected to more than one wireless device at a time. You’ll need to disconnect the last connected device in order to reconnect another device. After being turned off, SuperStar automatically searches for its last paired device when turned back on so you don’t need to keep re-pairing devices. To reset all the Bluetooth pairing information, hold the Bluetooth button down for six seconds to delete all previous pairing information.

The SuperStar charges via micro USB connected to your laptop. The plug in is found on the right hand side of the speaker in a cut out of the cover. With five hours of battery life, you’ll need to connect the speaker at least once a week depending on how often you are using it. The unit will keep playing as long as you are playing music or using the phone. However after 60 minutes with no charging cable attached, SuperStar does go into Auto off mode. (It will let you know with a cheery “Goodbye.”)

SuperStar lightweight and compact design makes it the perfect travelling companion. It does deliver big sound from a small speaker that should satisfy most audiophiles.

Find out more about Monster Speakers at Best Buy.