Today I’m reviewing the Fujifilm X-T200, a 24 megapixel mirrorless camera with an APS-C CMOS sensor capable of shooting up to 8 frames per second, at a maximum ISO of 12800.

Fujifilm has been something of an upstart manufacturer in the mirrorless era, coming almost out of nowhere to carve out a niche as one of the most important mirrorless camera innovators out there. Fujifilm cameras are typically beautiful design objects that hark back to yesteryear with classic ergonomics like manual control dials. These cameras have become firm favorites with photography purists, myself included. Fujifilm cameras are more than just great looking cameras though—they are intuitive to use, carry a host of useful features and, most importantly, produce beautiful images.

So of course I was excited to receive the X-T200 and get another chance to play with a Fujifilm camera.

Unboxing the X-T200 was a strange moment of cognitive dissonance for me, I’m sad to say. I immediately noticed that the build quality was not up to the standard I typically see in Fujifilm cameras. The exterior is mostly plastic, and this gives the camera a certain lack of heft that leaves me a little underwhelmed. I also noted a certain minimalism in the design that you’ll see in the images below that felt to me like a departure from the aesthetic that has worked so well for Fujifilm in the past.

One of the key features of the X-T200 that Fujifilm is touting is ‘copper-wiring structure for better performance’, which I have to say is a first for me. I’ve never come across a manufacturer selling the merits of the wire in their cameras. As to whether the claim regarding performance is valid, I honestly couldn’t say. Fujifilm is also proud of the autofocus performance of the X-T200 which includes updated face and eye detection. I did find the autofocus performance very good, although I found myself in the ‘zone’ mode by default, and I found that I preferred to use the ‘single point’ mode. I often use continuous focus rather than single focus, but I found that X-T200 hunts for it’s focus point a little too frenetically when continuous focusing. A good workaround is to use the Pre-AF feature, which will attempt to focus the camera on the assigned focus point even before you put your finger on the shutter button. It works really smoothly, doesn’t hunt to aggressively and basically gives you a nice head start in getting your shot.

Fujifilm was a relative early-adopter when it came to LCD touchscreens. I’ve always been a big proponent of the touchscreen so I feel like Fujifilm had my back. Of course the X-T200 has a touchscreen and at 3.5 inches it’s a respectable size. One of things I especially appreciate about Fujifilm touchscreens is the fact that you can use them to work through the camera menus. You can also review your images in a really intuitive way. You can scroll through your images by swiping left or right, use two fingers to zoom in, or double tap to zoom all the way in. I love this feature and I’m not aware that any other manufacturer has nailed it like Fujifilm. another great thing about the touchscreen is the ‘rotate-ability’. Being a vari-angle screen you can rotate it up, down or all the way to the front. This is a fantastic feature for shooting video, especially if you’re a vlogger and need to be in front of the camera while you shoot. You can even face the screen inwards to protect it getting scratched or damaged, a great feature to have when you’re traveling or out for a big hike.

Shooting video with the X-T200

The X-T200 has a dedicated video recording mode, and a dedicated video record button beside the shutter button. It can record 4K up to 30fps and full HD at up to 60fps. it is also possible to record in 1:1 square 1080p mode. 4k recording is limited to 15 minutes and full HD to 30 minutes. There is also the option to shoot high speed video too in full HD, giving you up to 120 frames per second, without audio. Being completely honest, I didn’t enjoy the process of shooting video with the XT-200 very much. First of all, I found the on/off record buttons difficult to work with. There were times it seemed the camera started recording on it’s own, and times I had trouble getting it to stop recording. This was another instance where I felt the design of the camera left something to be desired.

Another aspect of video shooting that was troublesome to me was autofocus. I’m used to using a camera where I can simply tap on the touchscreen to move my focus point and the camera will smoothly move to that point in a nice cinematic way. No such luck with the X-T200. Again the autofocus felt aggressive and the effect looks unpleasant on video.

Fujifilm has incorporated image stabilization into the X-T200 with it’s digital gimbal, designed to reduce camera shake. I love stabilization because it helps me to get smoother video footage. However I discovered a problem with the stabilization on the X-T200 that I haven’t come across before. After I recorded a review of another camera with the X-T200 mounted on a tripod, I discovered it was trying to keep me centered in the frame, so anytime I moved the frame would move too, giving a weird sort of hand-held effect. I looked for an option in the menus to turn this off, but all I found was the digital gimbal. I assume that was the problem, although as I said I have never encountered this elsewhere.

Despite my reservations about the X-T200, it does produce the very high quality images I expect to see from a Fujifilm camera. If you are primarily a still photography shooter, who wants to have the option to capture some video now and then, I think you will definitely enjoy the X-T200, provided you take the time to figure out your focus settings. Check out some sample images below that I captured with the X-T200 and the Fujinon XF 35mm f/2 R WR Lens.

Check out the full range of mirrorless cameras available at BestBuy.ca! How to use your Sony camera as a webcam 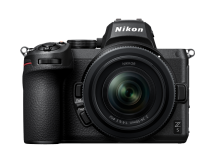