Time is ticking on that most important of holidays —Father’s Day! As the father of three kids, it’s possible that I may have a slight bias toward where the day should fall in the ranking of officially celebrated holidays. However, since Festivus has yet to be recognized and May the Fourth gets snubbed by most major greeting card manufacturers, Father’s Day is definitely up there. If your dad is anything like me (or the dads I know), Best Buy is a pretty solid bet when it comes to finding the perfect gift by June 15th. Here are a few suggestions. Note to my wife and kids: some of these may or may not be hints, but you won’t go wrong with any of them…

Let me present these gift suggestions in the order that I would use them on Father’s Day. A chronological guide, if you will.

Before I even reach for that first cup of coffee or consider breakfast in bed, I want a nice, close shave to start the day. Something that doesn’t involve the mess and endless refills of a disposable razor. Something that won’t result in razor burn or require me to break out the bandages.

An electric shaver is one of those Father’s Days gifts that I would use not just on that special day, but every day.

As a work-from-home dad, I’m the one who usually does the breakfast preparation. So once getting cleaned up and looking respectable is out of the way, breakfast in bed would be most welcome. Do you know what would make it the most awesome meal of all time? Not a shot of something special in the coffee (although that wouldn’t hurt on this special day).

No, I was thinking our bedroom could use something like this 4K Ultra HDTV. If that sounds like a bit much, I promise that if you let me set it up in the room so I can watch a few hours of Battlestar Galactica while eating my bacon and eggs, on Monday I will lug it down to the family room for everyone to enjoy. Because that’s what fathers do.

I try to keep from getting too out of shape, something that can be challenging when you spend most of your day sitting at a desk in front of a computer. So I like to get out and walk whenever I can. Father’s Day is no exception, especially after that big breakfast. And the weather in June is so nice —not too much rain, and not ridiculously hot yet.

What would make my stroll even better would be something like Samsung’s Gear 2 smartwatch.

With this latest generation Samsung smartwatch, built-in fitness apps and an optical heart rate sensor mean I can track my workout, no matter what I’m doing. No more trying to manually keep track of distance or time spent exercising. I can also listen to tunes over Bluetooth headphones right from the Gear 2 without having to bring my smartphone, snap photos if I happen to see something interesting and I can use it as a remote control (that can never be lost in the couch cushions!) for that 4K TV I’ll be setting up in the family room.

Combined with a smartphone, this cool wearable also lets me check notifications like e-mail and texts, make calls and I can use that big, bright OLED display to show off family photos. Plus it’s still pretty cutting edge and gives me something high tech to show off to the other dads…

Everyone needs a hobby, even dads. I’m a huge music fan but never got around to learning how to play a musical instrument. My investment in Rock Band equipment and song downloads has paid off, though. I think I may be ready to take the next step and move from small scale plastic guitars and video games to the real thing.

This Fender Deluxe Stratocaster in Tobacco Sunburst finish looks like it would do quite nicely. It even includes a USB cable and a Lightning cable so once I’m shredding, I can plug it into a Mac, PC or iOS device and start laying down tracks.

Ask any teenager: Is there anything cooler than a dad with a guitar? Dinner in the BBQ Pit

I don’t lay claim to any room in our house. I’m the one who cooks most of the meals, but the kitchen is family space. I love hanging out in the family room but it’s just that —the family’s room. Even my office does double duty as a storage area.

But in the furthest depths of the back yard is a weathered wooden structure that serves no purpose other than to house my grills (one charcoal, one propane). I call it the BBQ pit, although my wife would describe it more as a “beat up Pergola with a roof covering the equipment area.” It’s a little on the rugged side and the decor is a little rough (mostly hanging bottle openers), but it smells like woodsmoke and grilled meat and it’s mine.

My kids know that if there’s one surefire dad-pleaser of a gift for Father’s Day, it isn’t a tie. It’s something for my BBQ pit. Whether that’s a rib rack, a thermometer or even a replacement for the aging propane grill, they can’t miss with BBQ gear.

The best thing about BBQ equipment as a Father’s Day gift is that I will turn around and use that year round, including the winter (that’s where the roof covering the grill comes in) to prepare dinners that the entire family will enjoy. On June 15th, the weather may be nice enough to eat on the deck but if it’s not then the dining room will do.

The important thing is being together as a family and as the dad, being a big part of that. 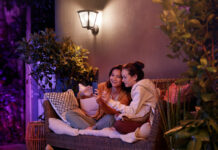 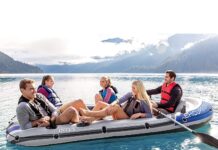