I’ve been a Linksys fan for a long time. The first Wireless G router of theirs I ever owned was so reliable that my wife and I miss it to this day and even considered picking one up again a couple years ago, despite it being only 2.4Ghz single band. When given the opportunity to review the Linksys EA 9500 Max-Stream Wireless AC5400 MU-MIMO Gigabit Tri-Band Router, how I could I pass it up?

The router was tasked to help me with improving my PC gaming connectivity, but I also made sure that my XBox and streaming from it put it through its paces too.

The thing that gave me the biggest chuckle about the EA9500 was the idea of MI-MUMO technology. Saying it our loud sounds a lot like warmup scales for karaoke but it stands for Multi-User, Multiple-Input, Multiple-Output. If that still sounds like a foreign language, the main thing you should know is that it attempts to treat each of your devices as though it is its own dedicated router. This mothership of a device also features a boastful 8 antennas, 8 Ethernet spots and 2 USB ports for external storage. It even has an on/off switch (for you to cut the kids off at any given time?) I’m not really sure why I mentioned that fairly insignificant detail but I don’t know that I’ve ever owned a router that actually had a power switch. That’s why it stuck out to me.

Built into the features of this router is media prioritization. In this feature, you can make certain connected devices a higher priority for coverage than the others. This is where you’d want to denote your heavy gaming or streaming devices.

Linksys has really put this through its paces to see how much it can push out of your WiFi network. In fact, it claims that you can stream up to 20 simultaneous 4K Videos at once without service disruption! Unfortunately, we won’t be doing that in this review but I will be putting it at its stress point in my household far past our needs at any given time. I’ll discuss that further down in the review.

What is this thing?

The first thing you’ll notice is just how big this thing is. Routers have followed a similar trend to cell phones in recent years. It seems like it’s rather blasé now to have those tiny dual band routers that rival your modem’s size. These have now been replaced by behemoth routers with lots of antennas and flashing lights. This one is no exception. It looks like something that should be in a science fiction movies taking aliens back to their home planet. It’s massive to say the least and while not that heavy (4 pounds,) it needs a lot of real estate in your office. It’s even bigger than our existing Tri-Band Netgear router, which I was convinced already had a postal code of its own. Here they are side by side.

Setting up is a breeze

Much like the Almond+ router I reviewed previously, the Linksys EA9500 can stay fairly “hands free” from an ethernet connected computer. There is no more reliance upon having a singular point of contact hard wired to the router to troubleshoot, nor should there be in 2016. With more people ditching the idea of traditional desktops and moving toward tablets and smartphones exclusively (Mom I’m looking at you,) this is a device that gives you flexibility toward that need by operating through the Linksys Smart WiFi app. Instructions are included with the router on how to connect and operate the router wirelessly, though I found it much easier to do the hard wired setup in comparison. It simply connected to the router, grabbed all of the application information and set things up. In all, this manual setup should take less than 5 minutes. I’ll have a video coming soon that walks you through the setup process. 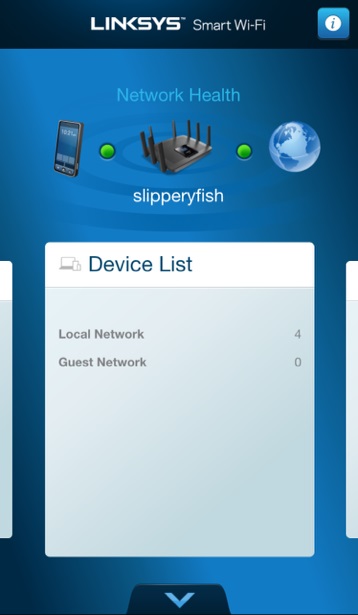 There are a few things you should know about the setup process in advance of getting this all to work, however. The first and most important thing is that it will automatically set up guest accounts and guest logins. As a result, I had 4 available networks to join until I dropped those out. It’s just a toggle in the router settings but might catch you offguard at first.

The second is that you shouldn’t really bother with delving into your Linksys account settings until you know the network is working correctly in your household. The Smart WiFi app isn’t the most intuitive thing in the world and I had to fight with it a bit to even get it to where it would accept my router’s admin password after I had logged in. That’s all you need to do to have the router sync up to your smart device. Just log into your Linksys account, hook up to your Wireless network and then enter the router’s admin password. It does the rest itself.

The Smart app has almost the same features as what you would see on your PC, just condensed into mobile form. You can add and remove guest networks, check in on network status and make administrative changes at your leisure there without ever having to run to your computer. This is all great but be sure to keep your battery charger handy. I found this to be one of the most intensive, battery sucking apps yet. You’ll see a screenshot on the left of the app in action. Yes, I chose to name the network after my daughter’s favourite Charlotte Diamond song!

Dropping nothing but basketball jumpers

I have to admit that I noticed an immediate improvement in my connection speed and even connection drops. On my current tri-band router, my connection would drop for 30-60 seconds at least two or three times in the late evening. That can be catastrophic for gamers that play games that require you to be always online. My wife was getting kicked out of her WoW groups and NBA 2K16’s MyPlayer requires you to be connected at all times (though for what reason I don’t know why) so she’d lose her groups and my game would crash out, dropping all progress.  I lost 3-4 hours worth of progress in the 2 weeks leading up to receiving this router. Nothing since. 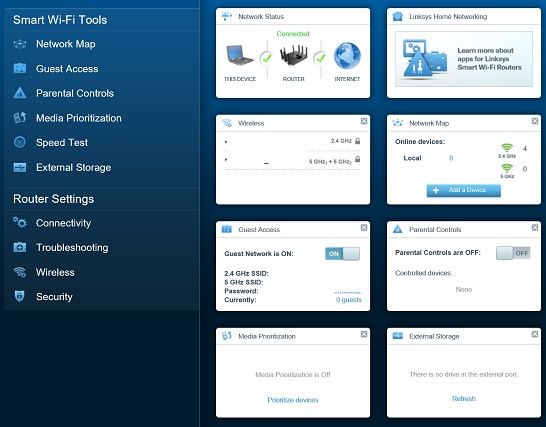 This router has also provided the most stable 5G Connection I’ve ever had. My WiFi upload and download speeds have never been the best in this neighbourhood, but the 5G connections have been so spotty (even through 3 routers and 2 modems) that we don’t even bother with it as a first option. I was a bit concerned when my Xbox ONLY found the 5G network but I wasn’t disappointed at all.

Better yet, I found the native signal from this to be fairly strong. At one point, I had at least 6 devices streaming concurrently without the help of a range extender. My wife was playing World of Warcraft while I was playing SimCity. She was watching Netflix on her old laptop while I had it running on the TV. For kicks, my phone and iPad had YouTube videos running. There were no signal breaks, though you could tell it was struggling a bit which I found odd since the MU-MIMO technology is supposed to ensure that each device connects at the top of its speed range. I fixed those issues however, through Media Prioritization. This feature is fantastic. My wife was talking to me about how reactive, yet sluggish the internet connection seemed to be on her laptop at but after prioritizing it, she had no problems going forward. My laptop is connecting and playing much faster too. This is a feature in some of Linksys’ other routers too, so while it isn’t exclusive to the EA9500, it’s still a powerful ally to have.

A small step forward for technology

The thing I like the most about this router it its flexibility to my needs. Since the router is in the opposite end of the house of where the living room is, it can be a bit of a pain to have to run back and forth making tweaks and checking. The Smart WiFi capabilities are brilliant in this regard, making my life so much easier and giving me the flexibility to see changes and monitor my network’s signal faster than ever.

Whether your home needs something this powerful is up to you. The amount of coverage it provides might be a bit more than your house needs and the price point reflects it. However, I’ve been looking at this router’s capabilities much like the rollover on a mechanical keyboard. You will never be in a place to use a 20+ key rollover but it’s nice to know you have it in your back pocket. Most households will never have the opportunity to maximize what the EA9500 is capable of, but it’s nice to know that this is definitely a long term solution for your home.