2020 is a year for gaming. At a time when we are staying in and playing more than ever, the industry is delivering new consoles, amazing games, and best of all, incredible new hardware and technology. That’s why the hottest gift at the top of the list for any PC gamer is a new graphics card.

Why do they want a new graphics card?

If you are shopping for a PC gamer, you may be wondering just what all the fuss is about when it comes to graphics cards (or “GPU’s”). In short, a GPU is the component responsible for translating strings of data into images your PC monitor can display. While typical PC’s that gear towards day-to-day tasks such as word processing and web browsing may have integrated graphics built into their CPU, gaming PC’s inevitably necessitate dedicated graphics, which means a separate GPU component.

GPU manufacturers are regularly improving technology to allow for their graphics cards to perform at higher levels. Video game developers in turn continually push the boundaries of their games to take advantage of the latest benchmarks. The result is a circle of innovation that leads to better and better gaming experiences every day! A few good reasons to upgrade

The PC gamer in your life may be eager to build a brand new gaming PC, in which case a new graphics card will be among their most sought-after components. Conversely, they may simply be looking to upgrade from an older, less capable card near the end of its optimal performance life. Some may even be curious to get into PC gaming for the first time, and as such wish to upgrade the stock GPU in their non-gaming PC to something that can handle a bigger load.

Regardless, a new GPU is the sure path to getting the most frames out of your gaming library. This is a huge benefit for players looking for the best performance from hot new releases like Cyberpunk 2077 or Microsoft Flight Simulator. Any gamer is sure to love a boost to the GPU power of their rig, which is why they make such a great gift!

NVIDIA or AMD for the holidays

Nearly all graphics cards are built on core architecture from one of two major manufacturers—NVIDIA and AMD. Some PC enthusiasts have a preference or loyalty towards one brand. Others are simply open to the best GPU from either manufacturer that suits their current needs at the right price. The hottest new graphics cards available right now are without a doubt the NVIDIA GeForce RTX 30 series. These cards introduce NVIDIA’s brand new Ampere core architecture. Every aspect of the RTX 30 series is a huge leap forward from the previous RTX 20 series, from overall performance to noise reduction and more.

The RTX 30 series offers three standard models, ranging from the more economical RTX 3070 to the monstrous RTX 3090—like this incredible ASUS ROG Strix NVIDIA GeForce RTX 3090. This powerhouse features features 24GB of video memory that supports resolutions up to 8K.

Many gamers also likely have their sights on the extreme performance and value of the RTX 3080. The EVGA GeForce RTX 3080 XC3 is a great example, which boasts 10GB of GDDR6X video memory that supports VR-ready functionality and immersive 4K gaming. Regardless of preference, you can be sure that the RTX 30 series is on a lot of players’ wish list.

If you want to learn even more about the RTX 30 series, check out this announcement from our very own Brad Moon! AMD fans need not worry. The manufacturer is responding with their own latest line, the AMD Radeon RX 6000 series. These cards will directly compete with the performance and specs of the RTX 3000 series.

The Radeon RX series is just trickling out to consumers right now. As such, it may take a little bit of time for stock to become available. Much like the RTX 3000 series, these cards and their impressive benchmarks are in high demand. In the meantime however there are plenty of other excellent AMD graphics cards available to browse. Another reason to upgrade or purchase a new graphics card is for VR compatibility. If a gamer’s GPU is getting a bit long in the tooth, it’s likely that it can’t quite handle the increase in performance necessary to run virtual reality games and software comfortably.

Many graphics cards will specify in the product description if it is capable of supporting VR on most PC platforms. This makes it easy to shop for the PC gamer who is looking to dip their toes into the amazing world of virtual reality. There are a number of great cards available that are VR ready, such as this MSI NVIDIA GeForce GTX 1660 TI graphics card.

Get ready for ray tracing

If there is a buzz word above all others in the realm of PC gaming right now, it’s “ray tracing”. Ray tracing is a more recent innovation that “traces” the path that light would take to travel to a viewer’s eye in a 3D space.

It’s not surprising that developers are eager to take advantage of this graphical leap in immersion and realism. And of course as a result, many of the latest graphics cards are touting the merits of their capacity to support ray tracing at high settings.

Take for example the EVGA NVIDIA GeForce RTX 3090. This card features second-generation ray tracing cores that generate double the throughput of the previous generation. Any new graphics card that will boost a gamer’s ability to benefit from ray tracing is sure to please. Whether the PC gamer on your list is building a new rig or upgrading a current one, a new graphics card is the gift that’s sure to catch their eye in a big way. There are plenty of options available from entry level cards for those looking for their first PC gaming experience, all the way up to incredible high end cards that deliver the latest in ray tracing, VR compatibility, 8K resolution, and more! 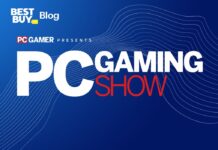