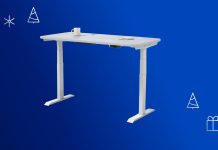 Enter for a chance to win a MotionGrey Adjustable office desk

Find the perfect gift with Sony and enter for a chance...