Gaming is one of the most popular pastimes and has become more commonplace as hardware becomes more powerful. The challenge laptop makers face is balancing power with portability, something that is not easy to do. Gaming laptops are traditionally known for having poor battery life, being bulky, and therefore making them difficult to use as a mobile devices. The 2021 Dell G15 is Dell’s newest mid-tier gaming laptop. Could this gaming laptop be the ideal balance of power, battery life, and portability? Let’s find out in today’s review.

Dell chose to stick with a straightforward, no-nonsense approach to packaging. Inside the pedestrian brown cardboard box you will find the Dell G15 laptop, a 240 watt power brick, documentation, and protective packaging. Upon closer inspection it looks like Dell took a more environmentally friendly approach to their packaging. All packaging used including the plastic was recyclable.

Upon unboxing the Dell G15 I had two immediate initial impressions. The first was of the material used for the body of the laptop. The Dell G15 has an entirely plastic body. Although the body is plastic the Dell G15 feels sturdy and durable. In addition to cost saving, a further benefit of a plastic body is that it reduces the weight of the laptop. In the case of the Dell G15 the total weight with a plastic body is 5.4 lbs. While it won’t win any awards for being the lightest laptop. The 15.6 inch Dell 15 is still light enough to be comfortably carried around in a laptop case or backpack. These days it’s common to hear people talk about that “dongle life”. This is because in an effort to save space laptop makers have reduced connectivity options down to less than a handful of ports. In some cases, laptops only have two USB C ports, meaning that a dongle is needed if you want to use USB A, HDMI, ethernet, memory cards, etc.

Fortunately, the Dell G15 comes with a good variety of connectivity options so that you don’t need to carry extra USB dongles. There are three USB A ports, which is just enough for you to plug in storage options and a mouse. Along the back you’ll find an HDMI 2.0 and USB-C port; both can be used to connect external displays. For productivity keeners like myself this is a great inclusion. With two video output connections you can maximize your desktop space by connecting additional monitors. Finally, there is also a dedicated 3.5mm headphone and microphone jack. I liked this addition as it meant that I had the option of using wireless or wired headphones when listening to music or playing games.

Gaming on the Dell G15

The Dell G15 that I tested came with a 10th gen core i7 CPU and a NVIDIA 3060 6GB GPU. While the 6GB NVIDIA 3060 GPU places the G15 into a mid-tier gaming laptop it’s no slouch when playing games. Testing APEX Legends I was able to hit an average of 150 fps at max settings. However, when playing more graphically intensive games like COD Warzone, the 3060’s 6GB of VRAM became a bottleneck. Because of the limited VRAM I needed to lower the game’s graphic settings, leading to a slight reduction in visual quality. That being said, after some fine tuning I still managed to play COD Warzone at a satisfactory 75fps.

When playing graphically intensive games it’s not uncommon for the graphics card to generate heat. This means that when heat needs to be expelled from the Dell G15’s body the laptop fans will begin to spin. During my testing with the Dell G15 there was a noticeable sound when the laptop’s fans began to ramp up. While the sounds of fans were noticeable, they were not loud enough to distract from my gaming session.

Playing games on the G15’s 15.6 inch screen was enjoyable. With a peak brightness of 250 nits, a resolution of 1920 x 1080, and a 120Hz refresh rate the screen performs well in most circumstances. I found the panel to be fairly bright and kept the brightness at 50% throughout my testing. One downside of the Dell’s G15 display was the viewing angles. Looking at the display from an off centre position would cause the display to become washed out and difficult to read. This is something to keep in mind if you plan to watch movies or play games with friends and family.

Speakers on the Dell G15 were average. While the speakers were able to achieve a high volume, the bass was lacking. When listening to media it’s clear that  the mid and high tones were strong. However when it came to bass this was something that I found myself missing. While playing COD Warzone the lack of bass meant that I would often miss out on important audio queues. Overall, with the strong mid and high tones and lack of bass, the Dell G15 speakers are left sounding tinny and hollow.

Because the Dell G15 is designed for gaming it packs some serious hardware. That hardware also makes the laptop a strong contender for students and productivity professionals. The 512 GB NVMe SSD storage is perfect balance of large storage capacity and fast read/write capabilities. This means that you’ll have more than enough space to store your games along side your work documents.

On the top of the screen you will find the integrated webcam. The camera quality could be improved but is adequate for video calls and meetings. However, if video quality is important, then you may want to look at connecting an external webcam.

On an average day without gaming the Dell G15 lasted seven to eight hours before needing to be charged. This included having multiple browser tabs open, watching YouTube, and using the screen at 50% brightness. With these hours you can comfortably take the G15 with you on the go without having to lug around the large power adapter.

Typing on the G15 took some getting used to. The Dell G15 has a full-sized backlit keyboard. One of downsides of including a full-sized keyboard on a small body is that the keys begin to feel cramped. The inclusion of a number pad also shifts the main typing area over to the left side of the laptop. This takes some time to get used to as your hands will be off centre when typing. That being said the Dell G15’s keyboard was satisfying to type on. During typing and long gaming sessions I did not find my fingers feeling fatigued or needing a break. The Dell G15 is a well rounded powerful laptop for all

After spending some time with the Dell G15 I became more and more fond of the laptop. The ability to play my favourite games and have a productivity powerhouse on the go just can’t be beat. The large 15.6” screen, seven to eight hour battery life, and modest weight make the Dell G15 a well rounded machine that suits all of your gaming and productivity needs. To see what other laptops and computer accessories are available from Dell have a look here. 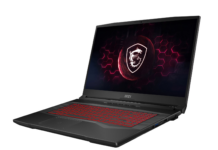