The Scosche 1080p smart dash cam is very unique in its presentation. It has a unique shape, a unique mount, and even unique features that I’ve never seen before. After my experience with the 720p Scosche dash cam left a lot on the table, I was interested to see what their full 1080p offering had in store. There appears to be a lot more here at only double the price. Let’s get started with this review!

The box for this Scosche dash cam is jam packed with items to help with installation. In addition to the camera, the adhesive mount, and the 16GB MicroSD card (which comes with an SD card adapter as well,) you also get cleaning wipes, wire hiding/panel removal tool, rubber wire bands, zip ties, and wire clips. There is even one wire clip that attaches perfectly to the end of the mount in case you need to run the wire longer up toward the top of your vehicle.

The fact that this is an adhesive mount means that I’m expecting an easier time of things than I did with the last Scosche dash cam I reviewed, which took a long time to fully mold to my windshield without falling off due to its suction mount. Right off the bat, there were a lot of features that interested me on this dash cam. A small footprint, a really unique mount that hides wire clips all the way up, a mobile app and local Wi-Fi and Bluetooth, a wide angle camera, and GPS. There’s no in-camera screen, but that’s not a big deal when you have an accompanying app. Yes, there is a mobile app that goes along with this dash cam and it has some interesting features I’ve never seen before. You’ll need the Nexar App to utilize a lot of the features of this camera and you’ll get a lot out of it too.

Right off the bat, you’re going to run into some really confusing wording. You have to turn notifications on for the camera to properly “record your drives.” This isn’t what you think it is, or what I thought really. I had originally thought that to mean that I couldn’t operate the dash cam without turning all notifications on. That’s not true, as the dash cam begins recording right away upon powering your car on. The app “recording your drive” means that it keys into GPS and records the trip you just went on and captures all the videos in one package for you to watch back. You can also get some realtime navigation through the app. Nexar also has some connected city features in places like New York City, but nothing here in Vancouver that I could try. The app does a lot of the setup work automatically too, such as saving individual GPS positioning and calibration of time/date/timestamping. My phone also found the dash cam, calibrated itself, and checked for firmware updates in record time too, so it was efficient to start with. However, my ability to connect to the Nexar App automatically after that was so spotty in my sedan that I gave up after a couple days. Nexar will push notifications to an Apple Watch as well to advise whether it’s connected or not and I was getting a lot of notifications when I was down the road that I wasn’t connected.

Interestingly, the app connected like a charm in my SUV (I wonder if there was some frequency interference with the Bluetooth in my sedan) and I was able to see some really good results when I swapped cars with saved drives. Nexar does drain the phone battery quite a bit (especially when you use its realtime navigational GPS) but my phone is also well past its shelf life, so it had battery problems to begin with.

Outside of that, the customization features on this dash cam are surprisingly minimal. I would’ve expected there to be at least some sort of customization around continuous loops, video quality, and the things you normally expect to see with a dash cam of this nature, but there’s very little. You can basically toggle sound on and off, turn automatic recording on and off, and try to optimize phone battery usage while the app is in operation. There’s also a “Continuous Power Outlet” setting that you can toggle on if your power outlet can provide continuous power even when not in operation.

There are some fabulous safety features on this dash cam. You can utilize your phonebook to create a group of emergency contacts that will be notified if you’re in an accident (currently only available for iPhones,) and Rideshare operators can also sign up for the paid Nexar Rideshare Protect subscription, which may also entitle you to discounts off your insurance (depending on where you are). In addition, there is cloud storage backup available for major incidents in case you need it. These are all really great features to have access to depending on your needs. With there being no customization around recording quality or loop recording, that means that you’ll always be recording in 1080p with one minute loops. Something that I found quite interesting is that the dash cam also appears to be capturing your GPS positioning with footage, so when you look at it on a card reader, you’ll see your video file along with a spreadsheet of what I assume are the longitude/latitude coordinates for that minute’s drive. There’s no LCD screen on this camera, so communication is done through the red light at the top of the main unit. If the red light is blinking, it means it’s in operation

There is also some parking sensor and sensitivity recognition to a certain degree. Unlike the Scosche 720p dash cam I reviewed a couple weeks back, it doesn’t look like these can be altered in any way. You’ll get a really good feel for just how sensitive all of this is if you unplug the camera before starting your car and then drive to see what activates the camera. I did this on a drive home from work to test this, and there were quite a lot of things that triggered it on my drive home.

Video footage is captured at around 123 MB per minute, so the included 16GB memory card can store (give or take) around 2 hours worth of drive time footage. That said, do keep in mind that this dash cam can accept up to a 128GB MicroSD card if you want to expand on memory. Chances are you’ll need to FAT32 partition it to make it work properly in the camera. I don’t think you’re going to be able to just plug and play like you could with a 16GB or 32GB memory card, as I’ve never had a dash cam that could do this and properly format a larger card into its useful format.

Footage is automatically overwritten once the camera exceeds its capacity, which is great. One of the things that I didn’t like about the 720p Scosche camera was the fact that it did not do this, but at least it had an LCD screen that gave that notification. Had this been a feature of this camera, with no LCD screen and a mobile app that wasn’t the most reliable, I would’ve called this a dealbreaker. I have to say that for the most part, the video quality of this camera is really impressive. With the angle of the mount, I would recommend trying to align this camera as close to the windshield as possible (so placing it as far up top as you can) to cut down on any glare. However, I think the recording output is pretty good. The speaker on the dash cam isn’t the greatest, but sound quality in my opinion is secondary to the video quality. I want crisp, clear footage on my dash cam, and this does well. In fact, I’d put the recording quality of this camera up against many cameras I’ve reviewed in the $300 – 400 price range. I’m impressed by the Scosche 1080p dash cam. The number of things in the package, the number of features onboard, and the smaller footprint make this a great choice.

There are some things I’m not a fan of. Despite being really well presented, the Nexar App left a bit to be desired, and while I didn’t see much personal value in the “record your drive” capabilities, I see how useful it would be for commercial users and rideshare drivers. I also wish there were a lot more customization options available, as I’ve never been a fan of one minute loop recording and think that long haul rideshare drivers could probably benefit from the ability to switch to a lower resolution to get the most out of their memory cards.

That said, the recording quality is really solid at both day and night, and does really well for a dash cam at this price range. It’s far more hands off than the budget-friendly Scosche 720p camera and I would absolutely recommend this 1080p dash cam if it falls within your price range and feature requirements.

The Scosche 1080 smart dash cam is now available at Best Buy and online at bestbuy.ca 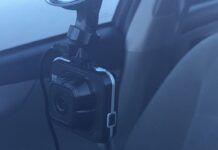