The Garmin Tandem Dash Cam features dual lenses for recording both inside and outside your vehicle. A built-in cabin-facing camera captures what’s happening inside your car while a wide angle lens captures everything going on outside. This is my first experience with a Garmin dash cam, so let’s find out if it lives up to the hype and its brand name.

The first thing you’re going to notice (and yes, that’s the whole thing pictured below in the palm of my hand) is how tiny this camera is. If you remember the movie Zoolander and Derek’s tiny cell phone, this is the dash cam equivalent of that when compared to its competition. This is a really small dual camera package overall.

What I find interesting about the unbox for this product is that everything is basically put together and ready to go. When you open the box, the camera is sitting there attached to an equally tiny adhesive magnetic mount and ready to go. The camera comes with a 16GB MicroSD card pre-formatted and already inserted into the bottom slot. Impressive!

The rest of the contents of the box are minimal. In addition to the instructions, you get your power cable, a dual USB power adapter (which is a first in all of my dash cam reviewing and really should be stock standard with more cameras), and a second magnet for mounting in a second vehicle.

Oddly, this doesn’t come with a MicroSD card adapter, but it comes with an extra data cable to plug the camera into your computer. It’s not really a big deal anyway since if you end up investing in a larger MicroSD card, you’ll get an adapter then anyway. The power cable intended for use with the camera is 14 feet long, so you can definitely hook up and “hide” wiring, as you’d do with most cameras. The wire won’t hang down like it does in the shot above. I was in the process of testing to see if the camera worked and was using the short wire to test and sync it to the app. I’ve since migrated to the longer 14 foot wire.

Installation is as simple as pulling the blue lens coverings and the adhesive coverings off and mounting to your windshield. Do be mindful of where you mount the camera though. Since this is dual lens, you need to be sure that you’re mounting it somewhere that the view back into your car isn’t obstructed. The tiny footprint of this camera means that it won’t obstruct your field of vision as much as most dash cams will.

The tiny nature of this camera means that there is no onboard screen to watch any of your recorded footage. You will have to do this exclusively from the Garmin Drive App or by plugging it into your computer. The Drive App features the ability to shuffle between inside/outside footage as well as download your existing videos and photos. Connection to the App is VERY easy, and you can also run firmware updates from your phone directly to your camera, which is something that not many other cameras offer. There are some features on the Garmin Tandem Dash Cam that I’ve never seen before. The first is that both cameras feature a 180 degree wide field of vision. Most cameras typically stop in the 140-145 degree range. This does give your in-car footage a bit of a fishbowl effect though, as shown here. Footage is recorded in 30 frames per second in 1440p for the front and 720p for the rear. There’s also very high quality in-cabin night vision for the inside camera.

The included 16GB card should net you around 90-120 minutes of footage, so if you need something more, you can get a bigger memory card. Garmin says your card must be FAT32 partitioned though, so you’ll have to keep that in mind. Windows 10 and Apple’s operating systems don’t have native FAT32 partitioning, so you’ll have to find a third party source (or somebody still running Windows 7) to format anything larger than 32GB.

While this camera is solely for the front of your vehicle and inside your cabin (meaning there is no add-on for a dedicated rear camera), the Garmin Drive App allows you to chain up to 4 more cameras together in a localized ecosystem, meaning you can purchase another Garmin camera for that purpose and chain it with this one through the software.

Built-in GPS (piggybacking off the Galileo satellite network) and accelerometers capture your coordinates, speed, and direction traveled. This isn’t a feature exclusive to Garmin by any means, but it’s interesting to see that they’re incorporating all the work they’ve done with the Galileo systems into their dash cams. This also means that your camera will always have the right time and date attached as well, which will be done automatically upon setup. Something that is new to me in the world of dash cams is voice control. Yes, this camera has voice control! With it, you can go through a series of options by entering the trigger phrase “Ok Garmin” followed by what you’d like to do. You do have to be pretty specific because it only recognizes a handful of commands (like “take a picture” or “save a video”), but it works really well.

When you are setting your camera up with the Drive App, you can also have this feature set in multiple languages besides English if you’re setting up for a multilingual speaker (or somebody that doesn’t speak English at all).

In addition to these great features, you can also expect the other standard features you would expect from a camera, like Parking Surveillance, G-Sensors, and automatic recording. There are a couple of features I was surprised not to see with this camera, however.

For a camera of this nature and quality, I was expecting to see more flexible recording options, like continuous loop length choices and even recording in higher frame rates. The camera caps out at 30 frames per second. In addition, there are cameras out there that offer 1080p recording inside the vehicle. While the latter isn’t a big deal, I know that there are dash cam enthusiasts out there that like 60FPS recording and will miss it here.

One big thing you’ll want to make sure of is that you toggle audio on if you’re interested in recording sound while you drive. It’s toggled off by default for some reason. This can be done in a couple of different spots in the app, and recording with audio on or off is one of the voice controls too. Watching footage on your dash cam With the lack of a touch screen or LCD screen onboard, the pressure is high on the Garmin Drive App not to be a dud, and on that note it does not disappoint. Sync is automatic (you don’t have to flip Wi-Fi features on and off to make it work), and footage comes up and plays almost immediately. If I had to guess, footage is streaming directly from the camera to the phone’s localized Wi-Fi feed, which is a big improvement over many cameras that require you to download before you can watch a video. The app itself is very easy to navigate and use.

The second option is to pull the camera off its mount and plug it into your computer with the provided USB cable. This is a fairly straightforward process to obtain and watch your footage, so I won’t spend too much time going over it. Is the Garmin Tandem Dash Cam worth the investment?

The pint sized Garmin Tandem Dash Cam does come with a higher price tag than most of its competition, but it’s easier to swallow when you consider all of the features it comes with. There are dash cams out there that require you to purchase an in-cabin camera separately, and some that don’t come with a memory card either. When you combine all of those together, the price tag makes more sense.

Garmin’s Drive App (and its ease of use) combined with the ability to chain other Garmin cameras together in one system is also something you will not find anywhere else, and the voice controls are really cool too. The small footprint this takes up on your windshield is great, and the fact that you get 180 degree views inside and outside is unparalleled.

The absence of an LCD screen is fine since the Garmin Drive App (and how it works with the camera) is basically best in class. And as long as you have a smartphone with you, you’ll never miss the fact that you can’t watch a video right off the dash cam.

There are other cameras that will do a lot of what this Garmin model does, but they will also take up 2-3x more room on your windshield and won’t provide as easy of an electronic experience as this one. I would definitely say that you should consider this if it fits your budget and needs.

The Garmin Tandem Dash Cam is now available at Best Buy and online at BestBuy.ca. 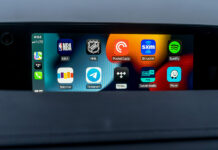 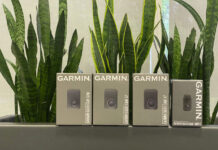