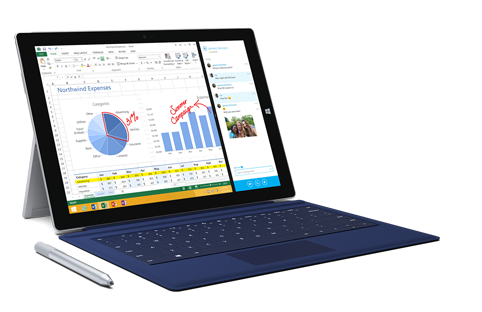 Windows 8 tablets are designed to get work done and Microsoft —the company that makes Windows and Office, the productivity tag team most of us use in the office— has been leading the charge with its Surface Pro tablets.

With the release of the Surface Pro 3 (which you can order now) Microsoft extended its target demographic beyond the office and mobile business user. 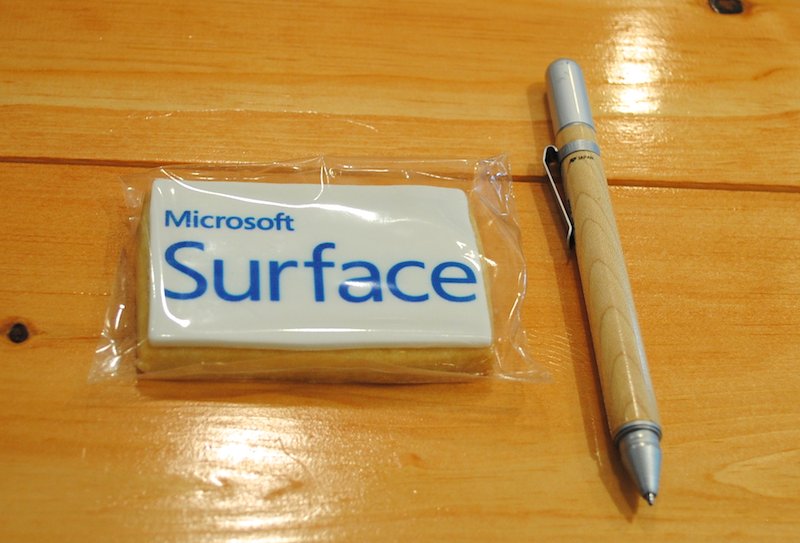 It tweaked the form factor with the Surface Pro 3, giving its professional tablet a bigger display (12-inches), a 3:2 aspect ratio that’s more like a sheet of paper and offering an improved stylus that’s the size and weight of a traditional pen with 256-degrees of pressure sensitivity. All of these changes were aimed at making the Surface Pro 3 appeal not just to business users, but also to the professional creative class.

All of this preamble leads up to the event that I attended on the weekend, the first-ever Microsoft Surface Café. Held at a hip pop-up venue on Toronto’s trendy Queen Street West, the tagline for the event was: “Where creativity comes together.”

The workshop I attended on Saturday was headlined by Francis Manapul. His bio? Pretty impressive:

“A New York Times best-selling writer and award-winning artist, Francis has earned praise from fans and industry professionals alike for his work on The Flash, Adventure Comics, and Superman/Batman. Cryptozoology and reality television fans will also recognize him from Beast Legends, where he travelled the world following stories of mythological monsters.”

That’s right, Microsoft actually had the guy who’s currently drawing Batman onstage, drawing Batman … and the Joker … using nothing but a Surface Pro 3.

But before I get into the details, let’s backtrack a little. 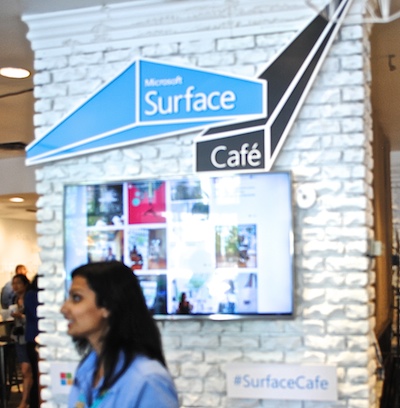 The Surface Café was set up in a funky storefront/restaurant space on Queen Street West in Toronto, just a few blocks from the Much Music studios.

Inside, a full on coffee house/café vibe was happening, with plenty of caffeine being poured, lots of overhead lights and big windows (great for passersby to see in, not so good when it comes to reflections and glare in photographs) long wooden tables and of course, a big selection of Surface Pro 3s set out for people to play with. These were the Core i5 models.

I sat down, spent some time experimenting with the new tablet and kept an eye on the growing crowd.

Plenty of creative professionals, plenty of interest in the tablet itself and the Surface Pro-optimized version of Photoshop Adobe has partnered with Microsoft on. One person who wandered in and sat across from me had plenty of ideas for Bill Gates (I don’t think he realized Gates hasn’t run the company in years), running from the impractical —magnetic levitation on the Surface Pro so dropping it doesn’t mean smashing it— to the intriguing —having multiple Surface Pros together automatically recognize each other to form a single big screen.

That’s one of the cool things about a pop-up event like this, the different sort of crowd you get compared to a formal tech conference.

The main show was a two hour session where DC Comics’ Francis Manapul described how he has been using the Surface Pro 3 and Photoshop for his Batman pre-production artwork. He liked the new pressure sensitive pen and noted how well the Microsoft tablet and its new paper-like aspect ratio makes storyboarding a more intuitive and productive process than his previous digital efforts —using a PC, a graphics tablet and a digital pen. 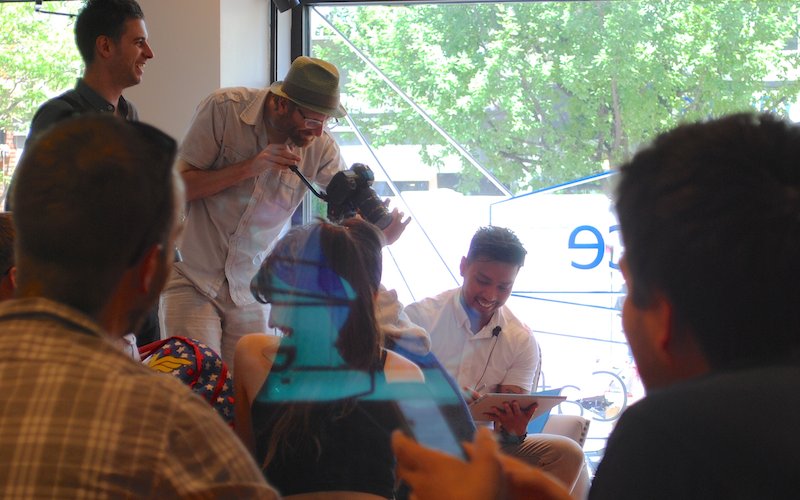 No pressure at all… Francis Manapul drawing using the Surface Pro 3 in front of attendees, cameras and curious passersby

Then Microsoft staff handed out Surface Pro 3s to everyone who had signed up for the session and we had hands on time trying out its graphics applications. As you can see, I stuck pretty much to the paint-by-numbers stuff, but there were some extremely talented artists in the room and the work they were able to produce on the tablet was amazing. Some of the more interesting creations were shown on a big screen where Francis Manapul critiqued them, before picking up his own Surface Pro 3 and proceeding to draw, showing not just how skilled he is, but how well the hardware and software supported what he was doing. He also circulated through the room, helping out and answering questions about his profession, technology and the Surface Pro 3. 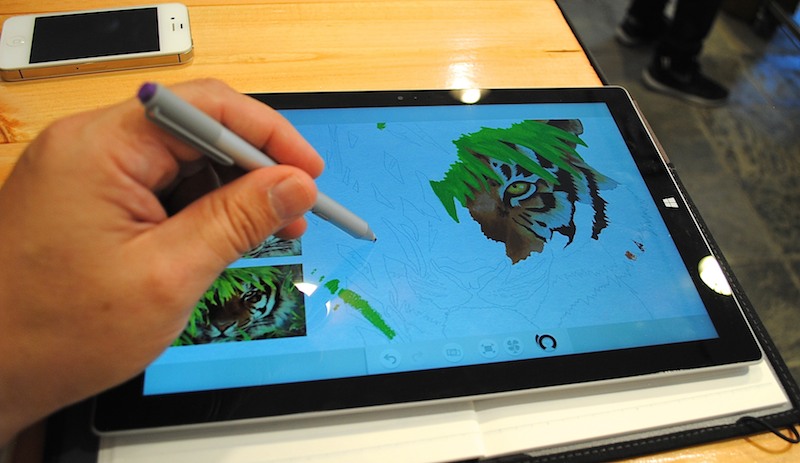 I asked Manapul outright if he had been using the Surface Pro 3 on a minimal basis to satisfy his commitment to Microsoft, rather than actually using it daily. It’s a direct and somewhat awkward question, but one that’s worth asking. Too often, the people promoting products at special events are simply fulfilling a contractual obligation (look no further than the celebrity spokespersons caught tweeting their undying commitment to one smartphone platform from a competing smartphone for a classic example of this in action).

His response was an enthusiastic affirmation that he had indeed been using the tablet and it was proving itself a valuable pre-production tool, not a promotional hoop he was jumping through.

Seeing how adept he was with using the Surface Pro 3 onstage supported that claim. And he was willing to admit that he’d love to draw Spiderman (from DC rival Marvel) and admitted that he preferred reading the finished comic books on paper as opposed to digitally —so clearly he doesn’t have an issue with speaking his mind. 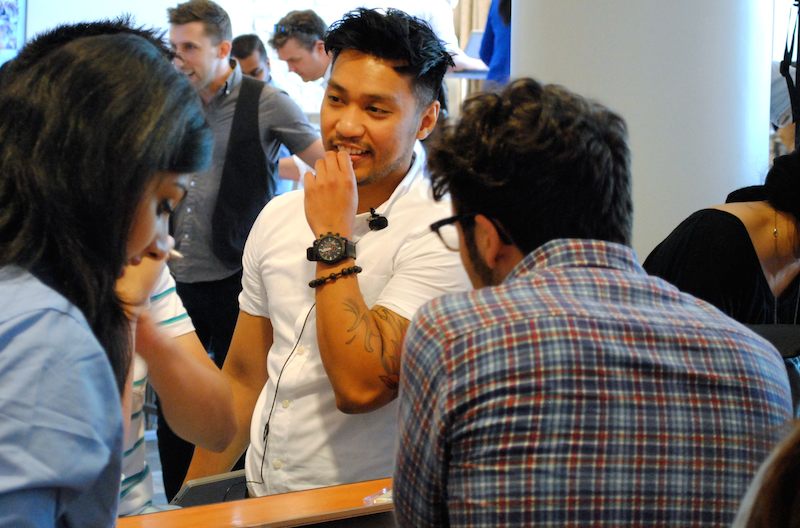 Based on the demonstration, the reception from the attendees and my own experience in using the tablet, I think the Surface Pro 3 has the potential to make a much bigger splash than previous versions. And the Surface Café approach is an excellent way to spread the news and get the device in front of a more diverse audience.

Interested in experiencing the Surface Café and Surface Pro 3 for yourself? If you happen to be in the Montreal area next weekend, you’re in luck. Microsoft is opening a Surface Café in that city on June 26 and is currently taking applications to attend the creative sessions.

For everyone else, you may not be able to have your digital artwork critiqued by Francis Manapul, but you can certainly visit your local Best Buy to check out the Microsoft Surface 3 for yourself.