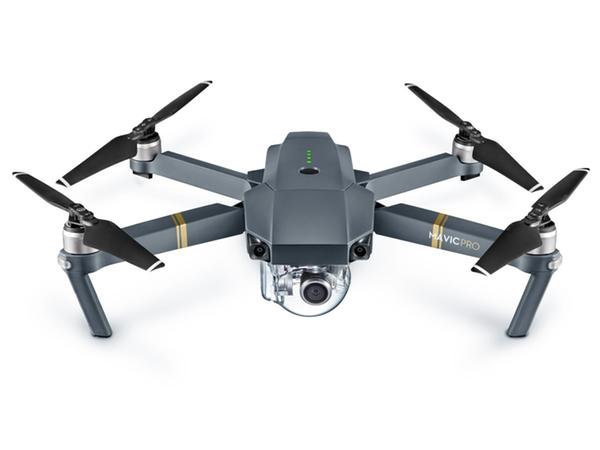 DJI unveiled a new drone called the Mavic Pro that continues a recent trend toward smaller sizes and lighter weight in the overall category. Compact and foldable, the drone slims down to about the size of a water bottle, and comes bundled with a new controller and a headset to see all the action in first-person view.

Despite its smaller stature, DJI seems to have managed to cram in much of what was in the larger Phantom drones, including the same sensors for auto-tracking and obstacle avoidance. It also threw in additional tracking modes and a gesture-based control setup where the Mavic Pro will focus on the pilot and allow for aerial selfies.

The sensory hardware embedded in the unit is designed to make the drone smarter in recognizing where it is. Indoors, that means more precise where there’s no GPS to lock on, whereas outdoors, it could help the Mavic Pro fly up to 35km/h while avoiding obstacles in its path. It may also sense distance to the ground at varying elevations, meaning that it would rise or drop going up or down a hill when auto-tracking someone.

The same camera and image sensor used in the Phantom 4 is inside the Mavic Pro, shooting 4K video at 30fps and 1080p HD as high as 96fps. It can capture 12-megapixel stills, including in RAW format, though the field of view has narrowed from 94 degrees to 78. The camera itself rests on a 3-axis gimbal situated at the front to reduce any chance of reduced view from the landing gear.

While doing that, DJI claims the Mavic Pro can stream live video as far as 6km away, with live feeds in 1080p going direct to services that support it, like YouTube and Facebook. Battery life has been rated at about 27 minutes, but that is probably a fluid number. Top speed has been clocked at just above 60km/h.

Alongside the drone itself are the DJI Goggles headset. Wearing these, you can see what the drone’s camera sees in mid-flight in 1080p. Interestingly, DJI cut out the controller from the equation and made it so that the drone’s signal bypasses it and communicates directly with the goggles to reduce lag. The field of view is 85-degrees.

Speaking of the controller, DJI made one with a low profile that is similar to a video game controller. A small LCD screen displays telemetric data, while a smartphone (iOS or Android) can be clipped on underneath for the DJI Go app to show a live view (when not wearing the goggles). The Mavic Pro can be flown without the smartphone at all, or only with a smartphone. This marks a first for DJI, which has always preferred to include a controller with joysticks, but it seems it will limit flight options to automatic functions the app offers.

In any case, the Mavic Pro is a tough competitor that comes on the heels of GoPro launching its Karma drone last week, and looks to be one of the most interesting drones available this year.

The Mavic Pro will be available soon. Check out the latest drones available now.