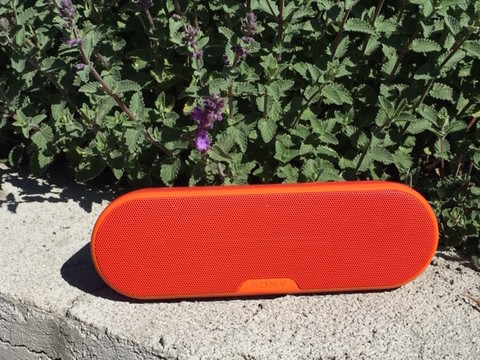 Summer is the perfect season to test wireless portable speakers; whether travelling, camping, having friends over, or spending hours outdoors working on the yard, or barbecuing with buddies, there are all kinds of reasons you may want music on the go.

It was good timing, then, that the Sony SRS-XB2 Extra Bass landed on my desk for testing and review. This small pill-shaped wireless speaker is fully portable and rechargeable, but feels substantial all the same.

Frequently I have trouble getting Wi-Fi or Bluetooth devices set up, and so do many others. It’s not that we’re inept, it’s that some electronic gadgets can be finicky, or perhaps their software and app handshaking isn’t fully bug-free yet.

Not so with the Sony SRS-XB2 Extra Bass; and let’s just call it the “Extra Bass” from now on, ok? This speaker set up on the first try, and I was pumping out music in about 35 seconds after it was unboxed. It uses a Bluetooth connection to hook up to the music on your phone or tablet, and as I said, it’s very easy to connect. This is the kind of speaker you could get for your grandparents and leave them unattended with. The Extra Bass also stays connected via Bluetooth; you don’t have to set up, reconnect, or re-pair each time you use it, making it very quick and easy to use. Just hit the power button and dial up your music, podcasts or internet radio.

Right out of the box, the speaker does have a noticeably solid bass thump to it, which I enjoyed. Plus the cool colour options (blaze orange, and blue) make it more fun that a typical wireless speaker.

This speaker also feels weighty and substantial; significantly more so than other wireless speakers I’ve tried. I also like that it comes with four nonskid footpads that keep it in place no matter where you’re using the speaker. In addition to playing music, the Extra Bass will also take phone calls, giving you access to a powerful crisp sounding speakerphone. When a call comes in, just touch the small telephone button on top of the unit, and you can go hands-free. 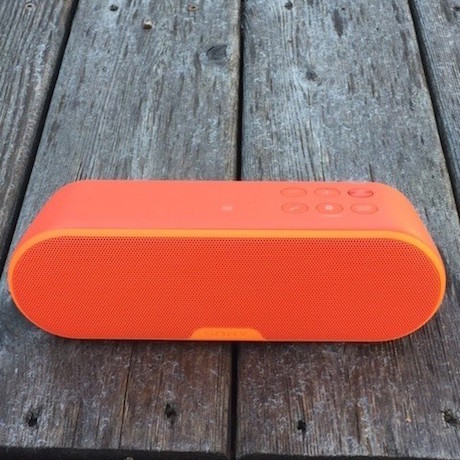 Speakerphone
I tested out the speakerphone and found that on my end, it was very easy to hear the person on the phone. The voice was clear and natural with no distortions and none of that hollow sound you often get on the speakerphone. On the other end of my phone calls, my callers said the sound was just fine; not unlike the audio quality they would get by using any other speakerphone. They were able to hear me clearly and without distortion or break up.

I did find that when I was using the speakerphone for things like voice dictation or notetaking, iPhone’s Siri did seem to have difficulty understanding me and I got more gobbledygook than words. But I think on that point, that’s just me being nitpicky.

The Sony Extra Bass is water resistant, meaning it’s protected against rain, but it will not take being fully immersed. Splashing shuld be ok, but since I have to send this speaker back to the mothership, I didn’t test that aspect of it.

How does the Extra Bass Sound?
The slightly angled face of the speaker projects the sound just slightly upward, just enough to keep it from blasting straight at you. But the angle also allows it to project sound more up and into the space, giving good room-filling sound.

This tiny speaker can really crank. At first I used it at a more normal or ambient volume. It easily filled my open kitchen/living room with sound. Then I decided to see exactly how loud it could play. While even playing it at about half its total volume was more then loud enough for me, when I cranked it up to full, I found there was almost no sound distortion and the volume was so loud it was unbearable in the room. Excruciatingly loud, yes, but it still sounded good.

I thought the speaker had plenty of bass. I like my hip-hip, so there was plenty of powerful beats tested on the Extra Bass, and for me, it delivered.

Checking the volume outdoors
If I was sceptical about any aspect of this test, this was it. It’s easy enough for a small or portable speaker to crank out music in a confined space where sound can bounce off walls and ceilings. But when it comes to outdoors, there’s nothing to contain the sound, so it can very easily be scattered to the wind.

I placed the speaker on a table in the middle of my yard, (my yard is about 50 feet by 50 feet) and turned it on at the volume I had left it at when it was used inside the house and it sounded great standing right in front of it.

Then I started walking further away. The sound was still crisp and clear and the bass was still quite discernible. Then I walked the perimeter of the yard and to my surprise the sound was still rich and clear. Even at a medium volume, it was still very easy to hear the music, yet I did not feel I was disturbing the neighbours. Just to see what the speaker could do, I cranked it up to about three quarters volume. This was definitely a party level of music, and would probably tick off the neighbours if I left it at that volume. The music easily filled the yard, and still sounded crisp and clear, and even at that higher volume there was no distortion or vibration.

I was pretty impressed; I could easily bring the speaker outdoors if I was working outside and be able to listen to whatever I wanted clearly anywhere in my yard. Plus it would be perfect for a backyard barbeque or party.
Who’s the Sony Extra Bass for? 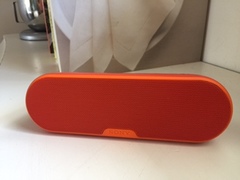 I think just about anyone would find the speaker versatile. From adults who want to have a cool speaker option in the house ready for gatherings, to seniors, to teens, primarily because it looks cool and can generate some good thumping bass. The small compact size also makes it perfect for taking on travels, camping or to the cottage.

Overall: The Sony SRS-XB2 Extra Bass
This is definitely a small portable speaker I would get for myself. Its weight feels substantial, and even when it’s cranking out on high-volume, the extra bass boost in this device is thumping the table. It provided a true rich sound, not at all like other ‘tinny’ sounding portable speakers that are out there.

I like the colour options, as orange just has a much more fun aesthetic to it compared to traditional gray or black that is often found on the market today. (Even though, yes, this speaker does come in black with grey trim too.)
I found the battery lasted a good long time with low use; during my week of testing, I never needed to recharge it once. Sony says the speaker has a 12 hour battery life for those times when you need it to play all day.

I was also thoroughly impressed by how well the speaker performed outdoors. I would love to use this speaker while gardening or doing yardwork since it’s very easy to hear it from anywhere and the sound doesn’t feel like it’s merely escaping into the ether to bother the neighbours.

If I could change one thing about this speaker it would be to make it fully waterproof, as I would love to use it outside more but I’m the forgetful type and would no doubt leave it in the rain. But otherwise, put one of these on my birthday list for this year.

Get the Sony SRS-XB2 Extra Bass from Best Buy