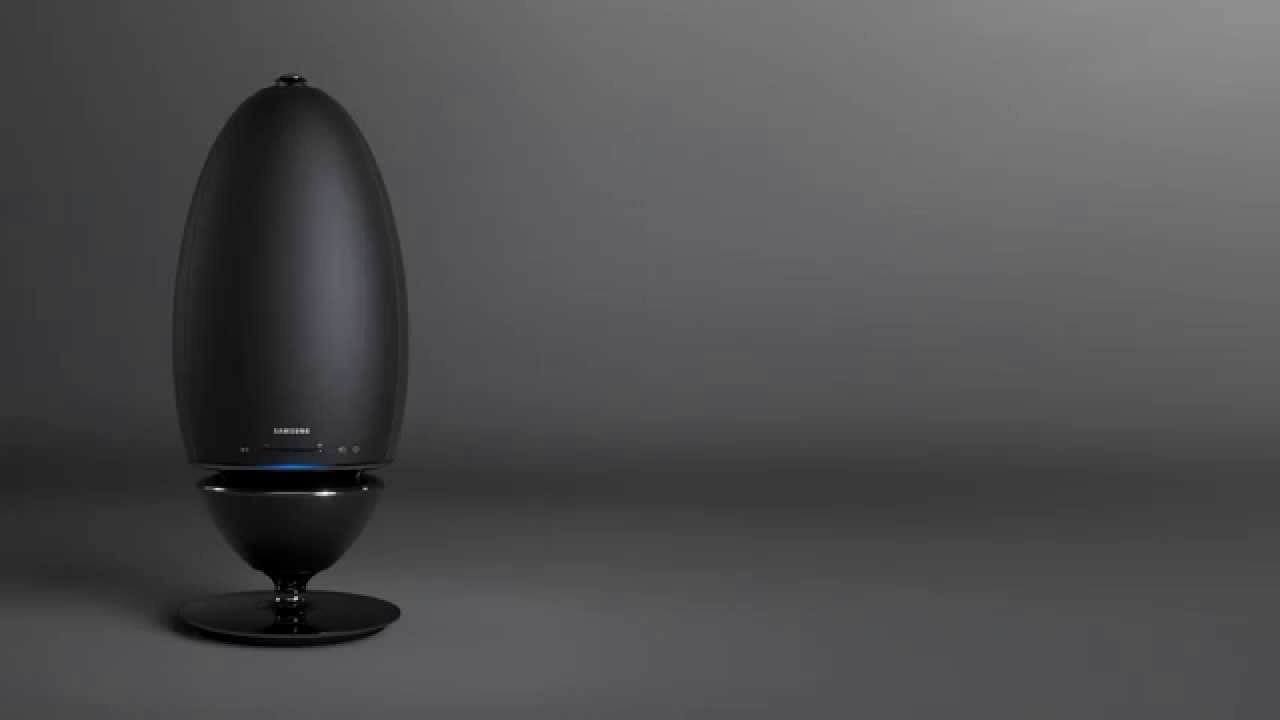 Lately I find myself drawn to technology that doesn’t look like it should. Nanoleaf light bulbs, are one cool device that recently really caught my eye. The Samsung Radiant-360 R7 Speaker is another. Neither tall, nor boxy, and nowhere near unidirectional, this eye candy has changed what I thought of a portable speaker.

Wireless but for the power cord, the Radiant-360 R7 is a Bluetooth-connected speaker that will blow you away with its power, design and crisp sound.

The first thing I noticed was the weight of this speaker. It’s HEAVY, but I didn’t find that to be a problem. The 7.5 pound heft gave it a really well-made feel. Plus I felt like it would be really tough to knock it over, despite the fact the speaker is very tall (16.6”) and rather football-shaped.
The outside of the speaker (I tested the black model, it also comes in white) is smooth and uniformly egg-shaped. The only break in the outer case is along the bottom quarter of the speaker where there’s an opening, and the power, Bluetooth and volume control buttons are housed above it. There’s also a small opening at the top.  The speaker sits firmly on a flat metal base.

The unique thing about this speaker is that it’s designed to push sound not in just one direction, but in every direction. Samsung calls this “Ring Radiator Technology”. It works by having dual acoustic lenses transmit audio from the speaker’s core out 360° “making everywhere in the room the sweet spot,” according to Samsung’s spec sheet.

I put the speaker in the middle of my open plan kitchen-living room-dining room and walked around the rooms with the speaker on. There was no discernible change in the music’s volume or clarity as I moved, unlike I get with another smaller portable unidirectional speaker I own.

Why does it work well in all directions? Conventional speakers transmit sound from only one side of the device and need to be  properly arranged for optimum sound projection. The Samsung Radiant-360 R7 projects omnidirectional sound, meaning anywhere in the room can be ideal for enjoying your preferred audio experience.

The Radiant-360 R7 was easy enough to set up.  I think I had to take two or three cracks at launching the app and getting hooked up to Bluetooth, but that took only a couple minutes. The app was largely unnecessary for basic music play; it’s more for connecting other speakers in the multi-room configuration, or adjusting settings. 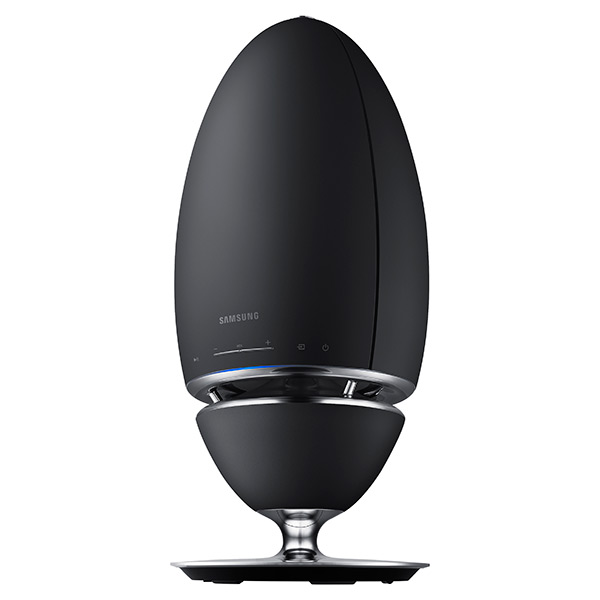 I did find that I needed to turn the speaker off when I was done using it, or a disembodied voice would loudly and randomly announce, “connection has been lost! Connection is complete!” and scare the carp out of me. As a result I needed to turn the power on, and reconnect to Bluetooth whenever I chose to use the speaker. There were also a few times when I didn’t turn the speaker off, but the connection appeared to be lost, so I’d also need to refresh the connection in those cases.  While this might be a pain for someone who’s always got the music on and wants it to be ready to play at the drop of a high hat, it wasn’t a concern for me in testing.

The Sound
I thought the sound was really great. On very high volume it’s very clear with no distortion. I could only get it up to about half volume before the house was shaking and I feared the cops would show up at the door. It’s very powerful and definitely fills the room with sound. If you added a second speaker, it might actually blow the roof off.

The Radiant-360 R7 also seemed not to have a very low setting.  I lowered the speaker volume all the way, and dropped the volume on my iPhone to one setting above mute, and the sound level was still competing with our conversation. My preference is for background music to be right in the background, but I had to move the speaker away from where we were to get it at that level. So if you like it loud, you’re going to love the Radiant-360 R7. If you’re more a background dinner music person, you’ll still love this speaker, you’ll just want to take care where you place it.

Streaming Music & Watching TV
The Radiant-360 R7 is compatible with several of the major music streaming apps, noted above. You just use your mobile device and the Multiroom App via Wi-Fi to connect and control one or multiple Radiant-360 speakers in any room of your home.
The Radiant is also designed to work as an external speaker with your compatible Samsung TV, to wirelessly and powerfully add to your home theatre experience. But it’s worth noting it only works with Samsung TVs for now, so I wasn’t able to test this aspect of the speaker.

Another really cool feature? Samsung has optional add-on accessories for the Radiant speakers, like a tall tripod-type stand, and a cool ceiling suspension gadget, giving you more versatility for where your speakers live. 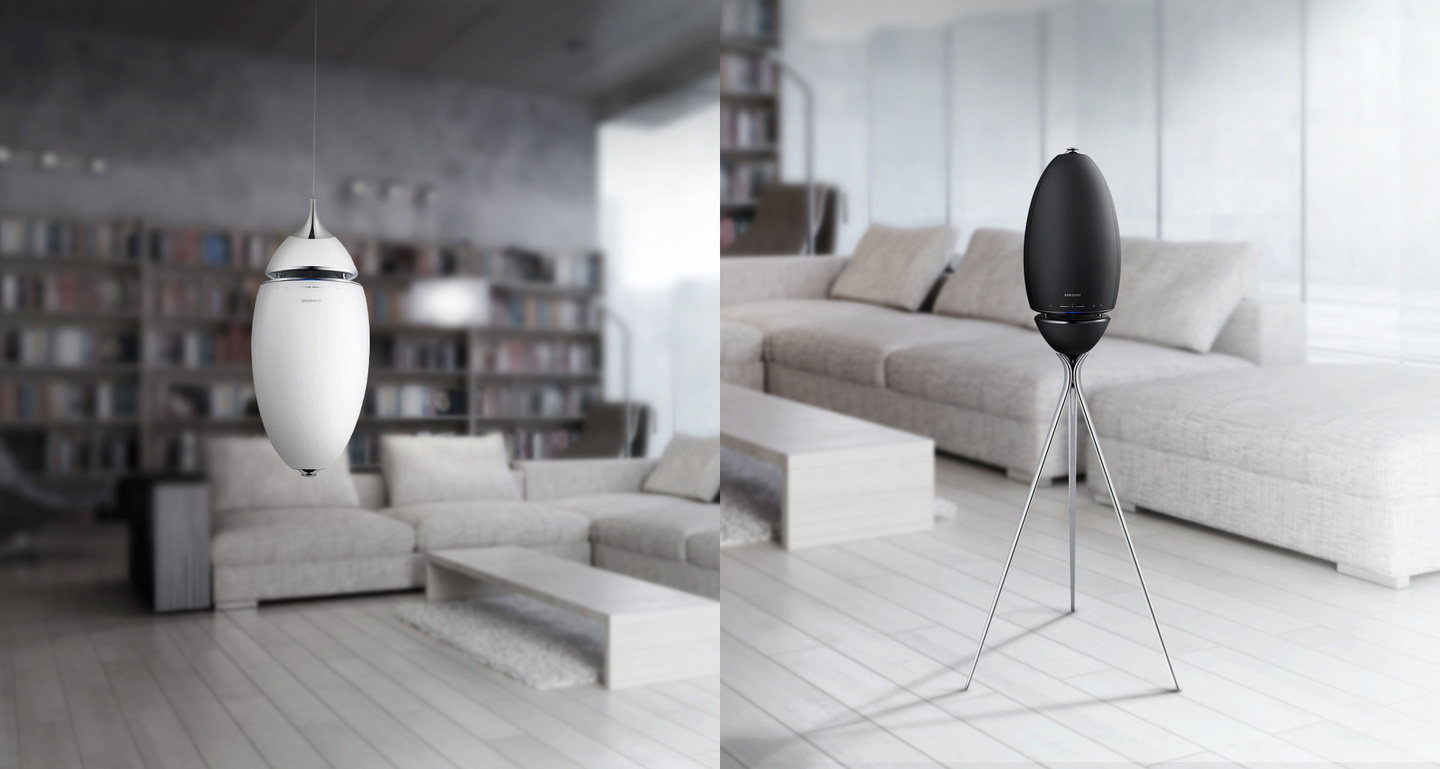 I really like this speaker.  The sound was great, if a little loud for my personal taste. The cool shape is unique and interesting and a little space age; it fit well in my home’s mid-century modern decor. I really like the omnidirectional design too, since I can leave the speaker in one spot and have music all over my home’s main floor. The sound quality was bang-on, and it has a really well-made feel that makes me think I’d have this speaker for a long, long time.

Get the Samsung Radiant-360 R7 speaker at Best Buy.