Best Buy carries a lot of movies, but the new remake of the classic horror film Child’s Play seems tailor-made for Best Buy audiences. First of all, the new Chucky doll is a robot that goes on a killing spree. We love robots! I love this premise much more than the 1988 original in which Chucky was possessed by the soul of a serial killer. Secondly, as a robot, Chucky is able to control all smart home gadgets and devices. And we sell tons of smart home tech! If you’re like me and can’t wait to see how they turned those plot elements into a horror movie, then enter this contest for your chance to win a pair of tickets to any cineplex theatre in Canada to see Child’s Play.

My favourites of the previous Chucky films are the original from 1988 (because it was the original) and the 4th movie in the franchise, Bride of Chucky from 1998 (because is starred Jennifer Tilly as the bride and she is just awesome). However, I have great hopes that this new version, with robot Chucky stirring things up, will be the best of them all. Here is a look at the trailer to get your heart pumping in anticipation (I love the theme music from “The Courtship of Eddie’s Father” playing in the background):

Chucky is a great character for a horror movie. In fact, I think that if you add Chucky to almost any movie, that movie would become more interesting. Think about it. The movie doesn’t even have to be a horror film—though it will be once we add Chucky. Imaging Beauty and the Beast staring Chucky as the Beast. Or Star Trek with Chucky the Klingon!

Entering this contest is easy, but you can only enter once. In a comment beneath this article, tell us which movie available at Best Buy would be a lot more interesting if Chucky was a character in it.

At the end of the contest we will select twenty-five (25) winners from all eligible entries. Each winner will receive 2 tickets to see Child’s Play at a Cineplex theatre.

This contest runs from May 20th until May 27th.

Remember you can only enter once. However, since the prize is 2 tickets, tell a friend who you’ll invite to enter too; that will double your chances of winning! 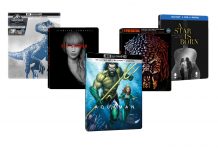