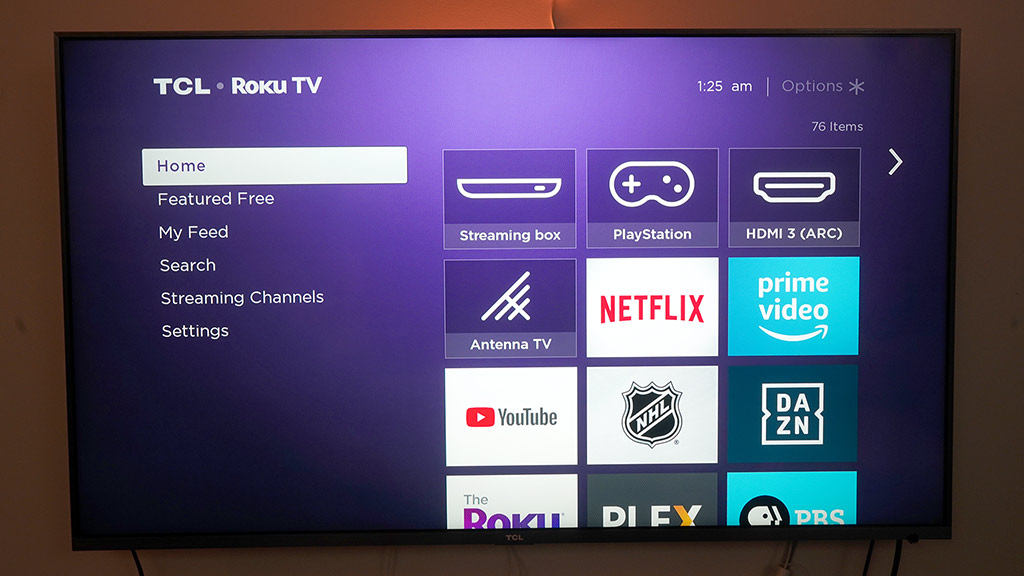 In the 55-inch 6-Series, TCL has made a 4K TV that displays quality on par with others double the price. If it’s good value you’re after, read on.

TCL is a relative unknown in the Canadian market, but its presence in the country has been ongoing for a while. Not only does it manufacture BlackBerry smartphones, it also makes a number of different products, including TVs. Those TVs are now available in the Great White North, and the 6-Series, in particular, is an impressive lot.

This 55-inch (55R615) supports 4K resolution, HDR and comes with Roku built-in, making it a pretty stellar feature set out of the box. 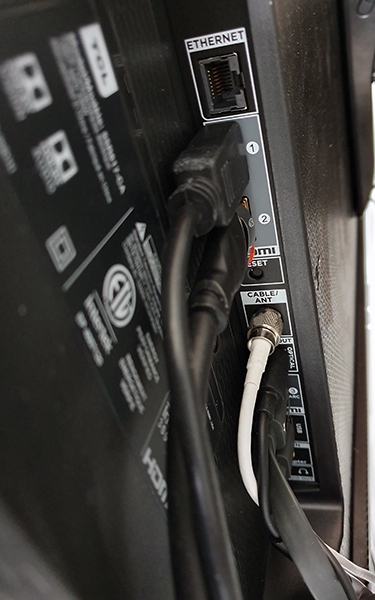 Having never released TVs in Canada before, there’s no legacy for TCL here. Even so, the design still matters, and the 6-Series is the company’s premier lineup. The 55-inch sports a brushed metal design that looks nifty, yet also neutral enough to fit in any décor. It’s also fairly light and thin. If you’re upgrading from a TV you bought several years ago, the weight difference alone may surprise you.

TCL also sticks with the ongoing trend of trimming down bezels to make the overall footprint smaller than similar-sized TVs from the past. Indeed, this may take up less room than a 50-inch flat-panel from as late as eight years ago.

The lighter weight does make it easier to wall-mount it, too. Having already mounted my previous TV, I chose to do that for this one. TCL does include two leg stands, but I didn’t like how spread out they are from each other. They don’t necessarily have the largest footprint unto themselves, it’s just that they protrude beyond the width of the actual TV itself. You need an entertainment unit far enough to actually rest them on.

All the connections are on the left side (right side when facing the TV)—three HDMI ports, one coaxial, one USB, one Ethernet, one digital audio and one headphone jack. The HDMI 3 input is an ARC one, meaning you can use it to connect to a sound bar or audio receiver. The TV also supports Wi-Fi for easy wireless connections to your home network. 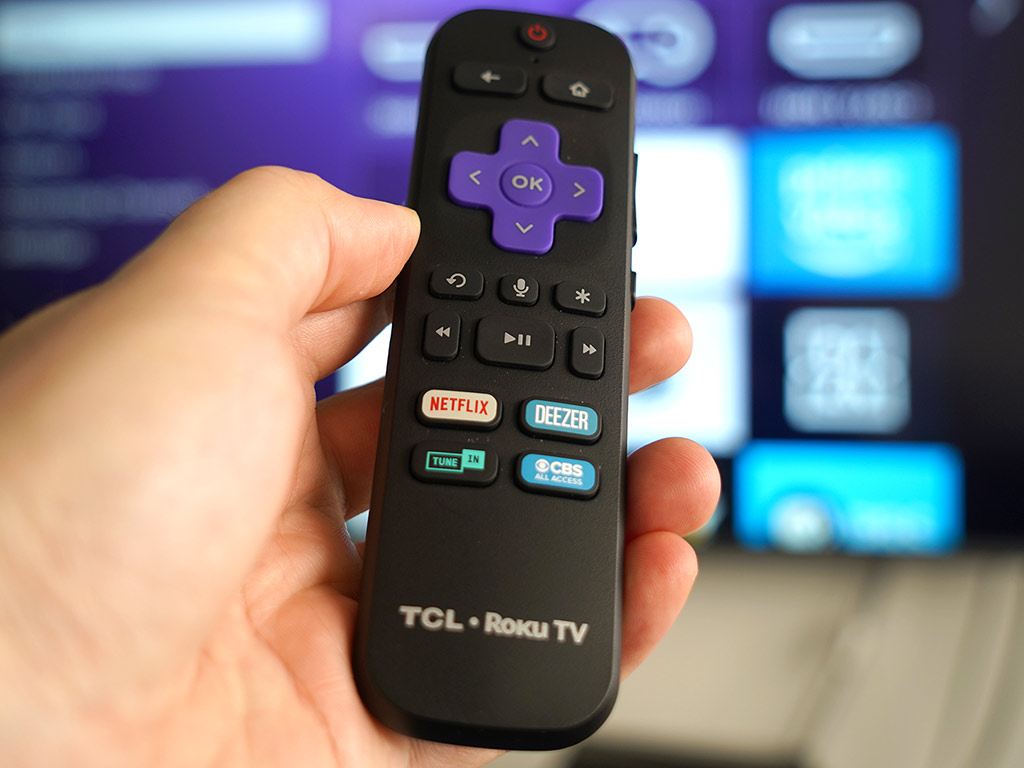 Being an official Roku TV means Roku will support the 55-inch like it does any other. That means regular software updates and performance on par with one of its better set-top boxes. It also means getting a modified Roku remote out of the box with the TV.

If you’ve ever owned or used one before, it will be familiar territory. You get the standard layout, plus dedicated shortcut buttons for Netflix, TuneIn, Deezer, and CBS All Access. One key thing to note is that the remote uses infrared, so you do need to point it at the TV to control it. It’s not like certain Roku remotes that work, no matter what it’s pointed at. There’s also no headphone jack.

The microphone button may be easy to miss, but it’s there to let you search for content by voice. Press it and ask for what you’re looking for. This isn’t as effective as Google Assistant, mind you, but it can be a quick way to find something. For example, saying, “show me 4K movies on Netflix,” will deliver a list to choose from. If too vague, it won’t know what you mean. Hence, context matters—what are you looking for, and on what platform?

You can use the Roku app on iOS and Android as an alternative to navigate the interface, control playback or even listen to content through headphones. No need for infrared in that case, either.

Roku nicely integrates other devices connected to the TV’s three HDMI and one coaxial inputs, so you know what’s what. For example, the antenna app on the home screen will play whatever channel you left it at in real-time. If it’s a game console or another set-top box in the other inputs, you may get similar treatment. 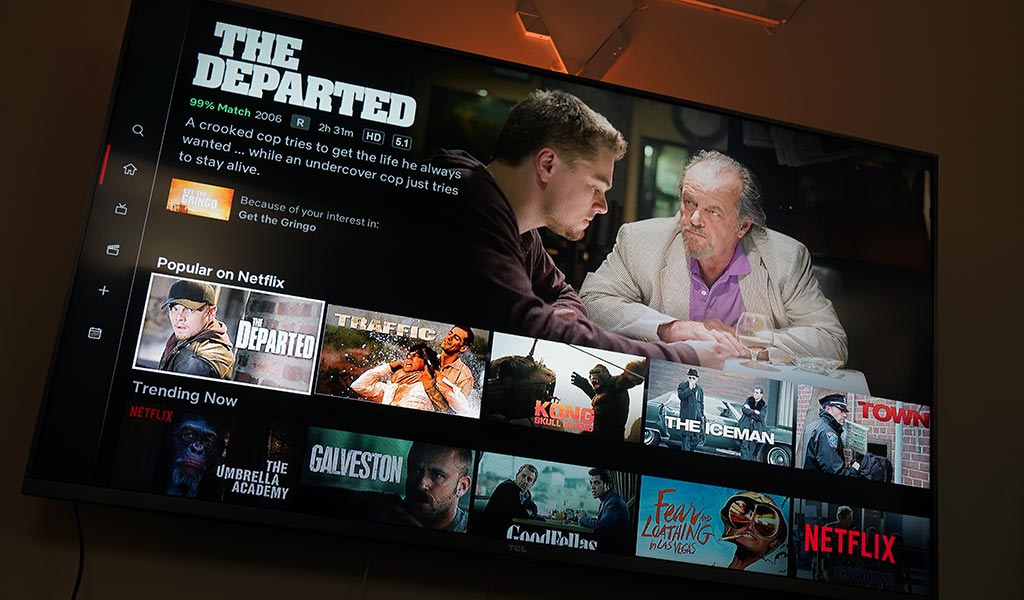 The specs for this TV don’t leave much to be desired. Both HDR10 and Dolby Vision, competing HDR standards, are compatible. There are 96 zones of local dimming backlights (it’s 120 on the 65-inch), which adjust brightness as needed to keep highlights up, while maintaining deep black levels. For context, that’s triple what a comparable TV from Vizio is able to do.

This kind of technology usually works well on more expensive TVs, but this was the first one I saw that could do it effectively at this price point. Contrast is usually something LED TVs struggle with because, unlike OLED screens, it’s hard to get the pixels to function independently. In this case, contrast is impressively varied, and really close to LEDs that are double or triple the price.

That’s not an exaggeration. It’s obvious from the moment you start watching content on it. Colours are rich and lively, helping movies, shows, and sports look clearer and lifelike. TCL did add some presets to help bring out a little more flair, depending on whether you’re watching a big game or playing one on a console, for instance.

It’s easy to just set things out of the box and forget about making adjustments, but I would encourage you to acclimate yourself with the viewing options to get the most out of the quality.

The HDR element comes in with content supporting it. Netflix and Amazon Prime Video are good examples. Shows and movies, like Narcos: Mexico, Ozark, Russian Doll, The Man in the High Castle, Black Mirror and others all looked great. 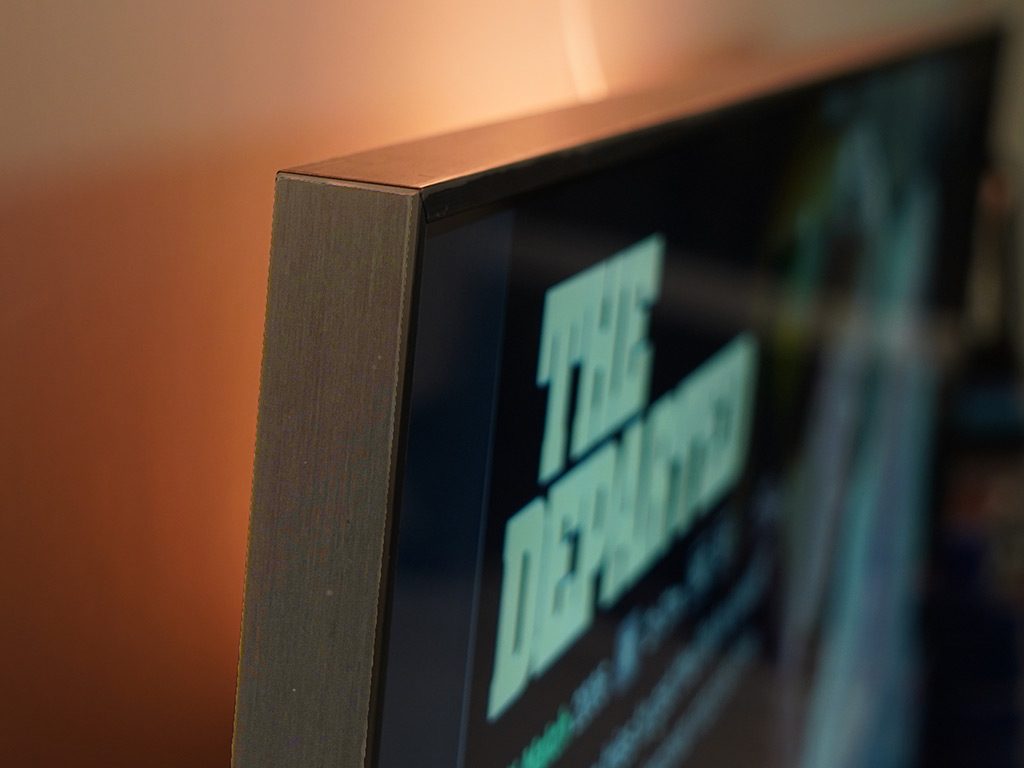 4K and things to look for

Viewing 4K resolution is always nice, but I should note that at this screen size, it may not have the same impact it would on a 65-inch. That’s not to say you’re missing a detail, just that the additional resolution is evident with more real estate. If you love watching anything in 4K, you will be pleased with the results here.

There have been reports of different issues with TCL’s 6-Series. These range from vertical banding to dead pixels and on vignettes on the corners. Vertical banding refers to colour anomalies that appear as smudges onscreen. In most cases, they’re hard to spot. In others, especially with uniform colours, they might pop up. I never encountered this in any discernible way during testing, so I can’t say much about it. Nor did my unit have dead pixels.

The vignette effect, however, is a thing. The corners will display a tad darker tonality than the rest of the screen. It’s most noticeable when there’s a lot of white onscreen, but look closely, and it will be there. I never found it particularly distracting, or even noticeable in most scenes, but you may see it differently.

One thing I will say about the sound quality of the built-in speakers is that they’re mediocre at best. If you’re saving money buying this TV, spend something to get a good sound bar. It completely changes how the TV sounds, and is well worth the upgrade. The TV also supports Dolby Atmos pass-through, so if you’re a stickler for good sound, that’s one option to consider.

It’s hard to argue with the value TCL offers here. To get a TV at this price delivering comparable video quality would definitely require a bigger financial commitment. You may want to go bigger with the 65-inch if you have the room, but this 55-inch is great for any room. Whether you want this as a living room or bedroom TV really depends on you.

Despite the issues I noted above, I consider them minor. They never detracted or distracted me from watching anything. From the image quality, down to the Roku experience, it was easy to like the whole package. 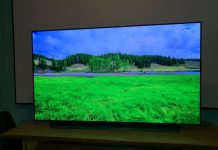