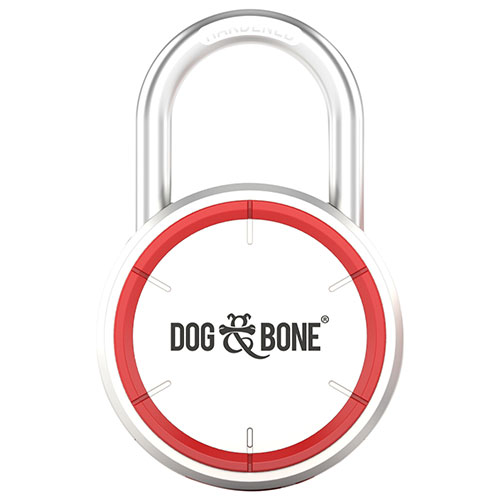 I don’t like keys very much. I have way too many, to start with, (and way too many keyring decorations, too), so I am always lugging around a jangle of keys that could be used to anchor a steamship. I’m surprised that one side of my body isn’t massively muscular from having to drag all those keys around. I don’t even know what half of them are for anymore, either. The other inconvenience about keys, is when you’re not lugging them around, you’re looking for them because you’ve misplaced them. Lastly, if you need to have other people access your stuff, then you have to go and make duplicate keys for them, and hope they don’t lose them or something. But, thanks to technology, we now can do away with more and more of our keys. We have keyless cars, keyless homes, and now, Dog and Bone have introduced a line of Bluetooth padlocks to safeguard your cool stuff. Are they better than a conventional padlock? Read on and I’ll give you my hands-on review of the Dog and Bone Keyless Bluetooth Padlock. 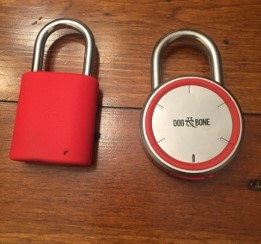 I had the opportunity to test out two different Dog and Bone padlocks; a large heavy-duty model, and the Mini. Both featured very solid construction (as in, you would need a good set of bolt cutters to circumvent these locks, as with all padlocks) each with a weather-proofed and covered USB port where you would usually expect a key hole to be on conventional padlocks. And it isn’t just the USB port that’s weather-proof. Apparently the padlocks can withstand rain, snow, hail and sunshine, as well as temperatures from -20 to +70 degrees Celsius. Other than the lock, the box contained just a lonely USB cable.

To open and manage all the stuff you can do with your Dog and Bone padlock, you’ll need to download the Locksmart app from your (iTunes or Android) app store. Once you’ve done that, you’ll have to create an account with Dog and Bone, and then it’s pretty easy to pair the app through Bluetooth with your lock. I did encounter a couple of connectivity errors when trying to pair a padlock to the app, but if you try again it seems to connect pretty easily. And the Locksmart app lets you manage a whole bunch of locks, so it’s like a virtual keyring (except it doesn’t have all my cool keyring toys) right in your phone. 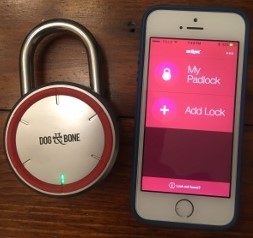 Throw Away The Key

As the name implies, the Keyless Bluetooth Padlock requires no keys, and the locks have no keyholes. You unlock the padlocks using the app on your mobile device. It uses the highest Bluetooth security standard—128-bit encryption, and you can even choose if you want to unlock using a simple tap (least secure) to using your fingerprint or a passcode to open the padlock. And if you want someone else to access your valuables, all you have to do is share a “virtual” key with someone (from anywhere!) and they’ll be able to use the app to unlock the padlock as well. You can give keys to multiple people, and more importantly, take them away when they no longer need them, all with the tap of a finger.

The problem with giving conventional keys to other people is you don’t have any idea when they’re using them to unlock your locks (unless you’ve got a security camera or something set up for that very purpose). The Dog and Bone Keyless Bluetooth Padlocks allow you to easily track who is using their virtual keys, and when. As soon as someone other than you opens the padlock, you’ll get a handy notification that pops up on your phone telling you exactly who is accessing the padlock. 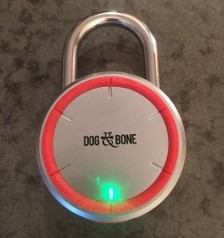 You don’t need to ever replace batteries on the Dog and Bone padlock, as it is powered by a custom lithium-ion battery, with two years of power or 3,000 “opens” on a single charge. You can monitor the battery’s charge via the Locksmart app (it will also let you know when it is low on power), and then just use the included USB cable to charge it up for another two years when it gets too low.

Is It Worth It?

Aside from the occasional connectivity issue, the padlocks work really great. They are solid, heavy and durable-looking. My only concern would be the -20 degree Celsius rating, as I have lived through some winters in places like Montreal and Alberta, where the temps dive below -40 on the worst nights. Would the lock be usable on a night like that when I had to go to the shed to grab a snow shovel? I can’t really say, as I’ve only tested these during summer-like weather. But it’s something to consider if you live in Canada’s frozen north. Otherwise, I really like the keyless technology, and being able to share virtual keys and keep track of who is using them and when. Charging isn’t an issue, either, as two years seems plenty long enough between charges, plus you can monitor the padlock’s charge. So, yes, I’d recommend these padlocks for folks like me who would love to do away with the inconvenience of keys, and welcome the convenient features of a smartlock like the Dog and Bone Keyless Bluetooth Padlock.

But what about you? Do you hate using keys? Would you consider using a keyless Bluetooth padlock to secure your valuables? Let me know what you think in the comments section.